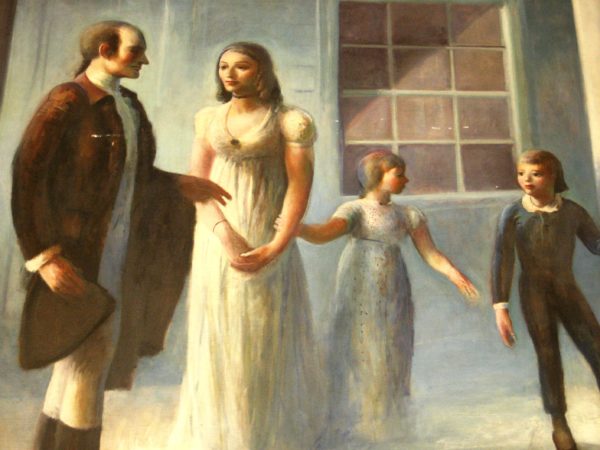 Rye’s most famous work of art is located in the local Post Office! The painting of John Jay and his family at “The Locusts” in Rye, NY was executed by American realist Guy Pene du Bois, a student of Robert Henri and friend of William Glackens and Edward Hopper. The artist received this WPA mural commission for the Rye post office in 1937 and titled it “John Jay at His Home.” It was completed in 1938. The composition shows John Jay, his wife Sarah and two of their children together with Jay’s groom, possibly an enslaved man named Peet.

Rye has been known as the home town of Founding Father John Jay (1745 -1829) for centuries. Jay’s family moved to Rye when he was 3 months old following their purchase of a 250 acre estate overlooking Long Island Sound from John Budd. A subsequent purchase increased their homestead to 400 acres and it was here in Westchester, on the Boston Post Road, that one of our nation’s greatest patriots grew up. The young Jay returned to Rye throughout his career to celebrate many milestones with family and friends including his own part in negotiating the Treaty of Paris.

Cognizant of Jay’s integral role in the shaping of American history and his Rye roots, Congresswoman Caroline O’ Day, a close friend of President and Eleanor Roosevelt, suggested during the WPA era that this New York native be the subject of a mural commission by Guy Pene du Bois inside the new Rye Post Office that was being built. O’Day’s efforts and the issuance of a special stamp cancellation to commemorate the ribbon cutting and opening of the facility on September 5, 1936 both created a renewed focus on Jay:

“Considerable interest in the life of John Jay has been awakened by the mural on the wall of the Rye Post Office depicting the departure of the famous patriot from the Jay homestead on the Post Road.” Rye Chronicle, February 11, 1938.

Du Bois’ masterpiece depicting Jay’s original farmhouse, “The Locusts” (where he grew up and which he later owned between 1813 and 1822) is still there today in the lobby. The Rye Post Office itself was renamed the “Caroline O’ Day” Post Office in 2009 thanks to the cooperative efforts of Congresswoman Nita Lowey and Rye resident and historian, Paul Hicks

Today the home that inspired the artwork is a National Historic Landmark, the centerpiece of the Boston Post Road Historic District designated by US Department of the Interior. John Jay’s boyhood home was further recognized by the City of Rye as a valuable home treasure–the City of Rye Landmarks Preservation Ordinance designates the Jay Property as a Protected Site, and the Jay House and Carriage House as Protected Structures (Rye Code § 117-5E(2)(a)).

Of literary note is the fact that the “The Locusts” depicted in the mural was an inspiration for the Wharton House in James Fenimore Cooper’s novel ‘The Spy.” In this tale, sparked by a story John Jay himself told Cooper, “The Wharton family” lived at “The Locusts” and their house was situated so “…the fall of the land to the level of the tide water afforded a view of the Sound* over the tops of the distant woods on its margin.” Cooper further explained the Sound to readers unfamiliar with its location: ” *An island more than forty leagues in length lies opposite the coasts of New York and Connecticut. The arm of the sea which separates it from the main is technically called a sound, and in that part of the country, par excellence, ‘The Sound.’ This sheet of water varies in breadth from five to thirty miles.”