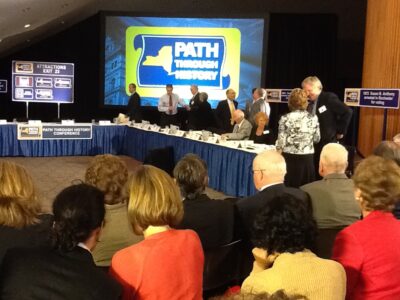 “The narrative of New York is a story worth telling. Our rich treasures of history and culture make the Empire State one of the premiere destinations for heritage tourists from around the world.” – Gov. Andrew M. Cuomo

On August 28, as part of a bold initiative called Path Through History (PTH), Governor Cuomo convened over 200 stewards of history from throughout the state (including 2 from Rye – myself and PTH Task Force Co-Chair, Harold Holzer.) His challenge to all of us? Work together as regions to raise the profile of some of our most eloquent and majestic cultural treasures. From Dutchess County to Niagara, we were grouped by our localities and then asked to brainstorm about how to best increase heritage tourism in our towns.

Our landmark gathering began early in the morning with backstage tours of ongoing capital projects at the Capitol from 8:30 to 10:00am followed by a warm welcome from Mark Schaming, Holzer’s fellow Co-Chair of the PTH Task Force and the Director of the NYS Museum.

Little did we know we were already on our own new path through history. Our group was guided through the freshly renovated Hall of Governors with its crisp new timeline of milestones in New York’s history. Smartly annotated exhibit cases line the corridor and contain rarely seen parchment documents related to our state’s founding and evolution as a great power. Holzer, who is also Senior Vice President of External Affairs of the Metropolitan Museum of Art served as an advisor to this well-curated project. One of Governor Cuomo’s first acts in office was to reopen this venue to the public which had been closed off from view since 1995. What a bonanza this is for history and art lovers! Each vaulted space could be a stand-alone museum so rich are these rooms – just the paintings, sculptures and decorative details alone rival any other collection in the world. Of greatest interest to Rye residents? A number of portraits of former governors that were missing from the collection were restored and installed, including a painting of Rye’s most famous son and New York’s second Governor John Jay (1795 – 1801.)

We lingered appreciatively in the refurbished Red Room and the “War Room” and the Executive Chamber Suite enjoying the brighter colors and newly labeled artifacts. We also got a hard hat tour of the elaborately carved sandstone Senate staircase in the Capitol now undergoing cleaning and restoration. It was fascinating to compare “before and afters” with a tour of the completed 1879 Assembly staircase with its red and gold stenciling and etched skylight.

The day sped by. Our tours were followed by two inspiring talks with brainstorming sessions and a collegial lunch in between. Historian Kenneth T.  Jackson gave a fabulous opening address expertly demonstrating that the thread of New York’s history is very much the same chronology of America’s watershed moments (baseball fans have to agree!) He emphasized that we need to make our state’s stories vital and fun for today’s generations. So much of US history was New York’s history first but other sites are doing a better job of promoting theirs. Harold Holzer underscored the theme that NY History is also at the core of America’s history – he reminded us that even a young man from Illinois credited the great state of New York with his election victory: US history’s trajectory changed after Lincoln delivered a pivotal speech at Cooper Union in Manhattan coupled with an indelibly popular photo of the president-to-be that was taken by New Yorker, Matthew Brady (who would later create one of the greatest pictorial records of the Civil War with his camera.)

Participants yesterday hailed from 10 regions in the State – Western NY, Finger Lakes, Central New York, Southern Tier, Mohawk Valley, Capital Region, North Country, Mid-Hudson, New York City, and Long Island. As President of the Jay Heritage Center, I attended to participate in Mid-Hudson region breakout discussions and advocate inclusion of the National Historic Landmarks on Westchester’s historic Long Island Sound. The prevailing buzz from everyone’s lips was teamwork and collaboration – all of these very passionate academics, volunteers and educators are eager to meet again and help refine and support this new strategic plan that includes incorporating innovate technology like smart apps and social media into travel itineraries. Governor Cuomo took our positive buzz and turned it into applause with a 1 million dollar announcement that each of the ten regions would receive 100,000 in marketing funds to fuel their creative efforts.

In a concluding reception at the Governor’s mansion, we exchanged business cards, Twitter and Facebook accounts and also had the chance to meet and share our ideas with the Governor and members of the PTH Task Force face to face. I made new friends from the USS Slater Destroyer Escort Historical Museum on the Hudson River and we talked about preserving NY’s naval history; I loved hearing the directors at Historic Huguenot Street in New Paltz talk about the importance of documenting the histories of families something we are doing as well. I shared ideas about making historic buildings energy efficient with Michael Hall from the Wings of Eagles Discovery Center in Horseheads. And one of my favorite new contacts is Janet Burnet with the Hudson Watershed Alliance – I can’t wait to show her our schedule of sustainable landscape programs. I was proud to invite them all to our historic landmarks in Rye and proud that our town has such an incredible resource in Harold Holzer.

If it sounds like something you wish you had been to, don’t despair! The Hall of Governors is online at www.hallofgovernors.ny.gov/ and you can hear Harold Holzer speak at the Jay Heritage Center on Sunday October 21 at 3:00pm about “The Image of the Emancipation Proclamation.” His talk is free as part of our continuing commemoration of the 150th Anniversary of the Civil War in New York and kicks off an exhibit about the complicated and contradictory story of the Jay Family and their anti-slavery efforts.

Lastly I do urge you to follow NY’s Path Through History – make a stop outside Westchester at one of the places I mentioned above. And if you haven’t seen us yet, please come to our own historic jewel box in Rye – the place where the architect of both NY State’s Constitution and the NY Gradual Emancipation Act grew up – the place where John Jay chose to celebrate the end of the Revolutionary War on Westchester’s historic Long Island Sound. Bring your family and walk the paths he walked with his. Explore the 10,000 year old landscape that shaped a young boy into one of America’s greatest jurists and peacemakers.

Postscript – The Jay Estate was added to NY State’s Path Through History in 2014 as part of an Equal Rights themed tour. New Yorkers have been proud to be at the forefront of Civil Rights advocacy but the struggle for equality continues to be challenging. Jay’s efforts to abolish slavery began in 1777 and culminated in his signing of the Gradual Emancipation Act in 1799 though he himself still enslaved individuals through 1810.  His sons Peter Augustus Jay and William Jay continued his work – Peter Augustus argued for voting rights for freed Black Americans but was overruled. Signs installed on the Hutchinson River Parkway and US Route 1 help direct visitors and school groups to our site where they can learn more about our nation’s complicated heritage and ongoing struggle for equity.