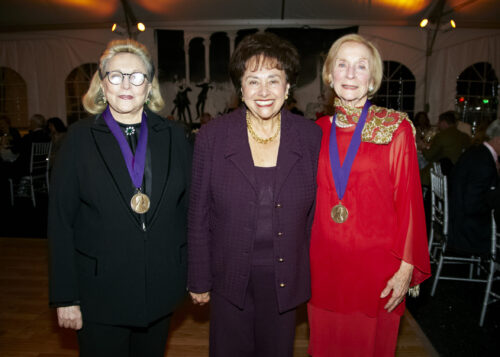 Jay Heritage Center (JHC) Founder Catherine “Kitty” Aresty and New York Preservation Advocate, Barbaralee Diamonstein-Spielvogel were recipients of the 1st Annual “John Jay Medal for Service” awarded at JHC’s 20th Anniversary Gala on Saturday, October 13, 2012. In keeping with the legacy of one of America’s greatest Founding Fathers, the John Jay Medal recognizes individuals who demonstrate a selfless spirit of commitment and engagement with their community.

As an early member of the Jay Coalition, Catherine “Kitty” Aresty helped harness the energy of thousands of volunteers and citizens to save the Jay Property when it was threatened by commercial development in the early 1980s. She was one of 5 dynamic women who formed the vanguard for preservation of the site, finally securing a victory in 1992 but her total commitment to seeing the property restored for public use extends more than 30 years including 22 consecutive years on the JHC Board.

Similarly, Barbaralee Diamonstein-Spielvogel’s career spans more than 40 years. She has been a pioneering champion of preservation and the arts, credited with bringing the first public art to Bryant Park and the first public performance to Central Park. The first Director of Cultural Affairs for New York City, she was the longest term Landmarks Commissioner in the city’s history, spanning four mayoral administrations from 1972 to 1987. Her expertise and advocacy of historic preservation has garnered her countless honors and prestigious appointments from nor fewer than 4 US Presidents. Dr. Diamonstein-Spielvogel is the current Vice Chair of the New York State Council on the Arts.

Congresswoman Nita Lowey and Westchester County Executive Rob Astorino served as Honorary Co-Chairs of the evening which drew over 170 people from Manhattan, Westchester and Greenwich to the National Historic Landmark site. While the event also marked an important 2 decade milestone for the organization, adding to the festive feeling was the recent announcement of a dynamic public-private partnership between JHC, New York State Parks and Westchester County in which JHC will manage and restore the entire 23-acre Jay estate as a historic park and educational resource. The landmark agreement is slated to be finalized in 2013.