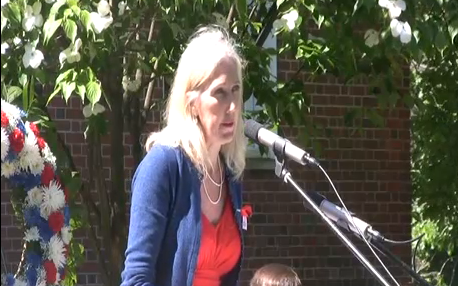 Remarks by Suzanne Clary, Historian and President of the Jay Heritage Center, keynote speaker at the City of Rye’s Memorial Day Observance

Today we recall the bravery of our  fallen heroes who served valiantly in the armed forces so that others could enjoy the liberties of an education, careers, safe homes, and families unencumbered by the storms of war– we honor and cherish their sacrifices whether they hearken back hundreds of years to the days of the Revolutionary War or whether they co-exist in our more recent memory with grief and gratitude, remembering the young soldiers killed in modern day conflicts like Operation Iraqi Freedom and Operation Enduring Freedom. I want to thank John Carolin and all the members of Rye’s American Legion Post #128 for inviting me to make a few remarks today about how our community of Rye can best carry on the legacy of service that these Americans entrusted to us.

But first a little Rye history. Several years ago, in the course of researching the Palmer and Devereux families who had lived at the Jay Estate during World War I and II, I came across a very precious volume, the book I now hold in my hand. It was published in 1923 by Rye’s then much esteemed historian, Chauncey Ives. It is the World War History of the Village of Rye documenting the distinctive patriotic fervor of our citizens during the years 1917 – 1918. In it, Ives noted that reaching far back to the days of the Founding Fathers as well as to the War for the Union (what today we call the Civil War) Rye consistently possessed what he called “desirable patriotic active citizens who steadfastly and courageously were wise and faithful in furthering the welfare of their community.” He noted how they balked at British rule; that they “knew their rights and knowing, dared maintain them.”  He added that the citizens of Rye were always “going over the top” exceeding their “quotas of men, money and war work of every kind.” He charged future generations with the responsibility of maintaining this illustrious record of over achievement when it came to defending our freedoms.

I knew from my own studies that he was right about the tendency of our town to go over the top. During colonial times, it wasn’t enough for John Jay to just be President of the Continental Congress. No, this native son of Rye had to serve in more branches of government than any other Founding Father. Long before his image as first Chief Justice of the United States was cemented into place Jay risked his own safety to thwart terrorist plots and assassination attempts on the life of his close friend and confidante, George Washington. As the CIA’s website will confirm, Jay further tempted fate by living in the shadowy world of spies and counterspies while Rye was a dangerous no-man’s land, a misnamed Neutral Ground that was far from unpolarized. Though his story stands out among the Rye residents who fought for freedom from tyranny, there were many other men and women, including free blacks and Native Americans of Rye whose equally selfless deeds are unrecorded in our history books but whose valor must also be remembered from this first war to secure liberty.

America’s history has been shaped by such brave patriots more interested in justice and protecting our inalienable rights than in personal glory. In past and current wars, many gave their lives so that family, friends and even the countrymen they would never meet could enjoy the rewards of freedom. As we commemorate the Sesquicentennial (150th Anniversary) of the Civil War, we also remember the Union veterans of the Grand Army Republic (GAR) who recognized that it was imperative to pay tribute to their colleagues who had died in battle. The first official observance of Memorial Day was known as “Decoration Day,” so named after the fresh cut flowers left at soldiers’ resting sites. It took place at Arlington Cemetery on May 30th, 1868 though many informal ceremonies had been performed long before in churchyards throughout the country including our own in the Sound Shore area.

And so on May 5, 1868, the GAR headquartered in Washington DC issued the following General Orders:

We are organized, comrades, as our regulations tell us, for the purpose, among other things, ‘of preserving and strengthening those kind and fraternal feelings which have bound together the soldiers, sailors, and marines who united to suppress the late rebellion.’ What can aid more to assure this result than by cherishing tenderly the memory of our heroic dead, who made their breasts a barricade between our country and its foes? Their soldier lives were the reveille of freedom to a race in chains, and their deaths the tattoo of rebellious tyranny in arms. We should guard their graves with sacred vigilance.

Though originally centered on those who perished in the Civil War, the observance expanded slowly to encompass the contributions of all those who died in US conflicts dating back to the Revolutionary War, the Indian Wars, the War of 1812, and the Spanish American War. The Villages of Rye and Port Chester took the message of fraternal responsibility to heart and often celebrated Decoration Day together, with entire days dedicated to visiting and caring for graves at the Greenwood Union Cemetery, the African Cemetery, St. Mary’s Cemetery, The Milton Burial Ground and the Jay family cemetery. In one set of directions published in the Port Chester Journal, then a newspaper also serving Rye, Mamaroneck and Greenwich, members of the Post were instructed to “appear in uniform and white gloves as far as possible, but no comrade will absent himself from the parade on account of no uniform.” Their unified dedication to remembering their brethren extended outside of Rye too as they attended ceremonies in neighboring towns, “The Post will leave Rye Depot on the 12:30 noon train, for Mount Vernon, and take part in the Parade and Ceremony of the unveiling of a Soldiers’ Monument.” Patriotism didn’t discriminate by religion, economics, race or location.

What I personally find most inspiring is that while it took years of the Civil Rights Movement to begin to address racism in our society, our 19th Century veterans were way ahead of us and crossed lines of segregation to honor soldiers of all heritages. This past Saturday, I was privileged to attend Memorial Day services with NY State Assemblyman Steve Otis and NY State Senator George Latimer at the historic African Cemetery on North Street directly next to the Greenwood Union Cemetery. As early as 1891, local newspapers published the names of 6 black soldiers buried there whose graves were regularly decorated at the same time as white soldiers in the adjacent cemetery. In death, these men had finally achieved some small measure of equality and freedom from the prejudice of life, a prejudice that daunted them even when they offered to help out and enlist. For in New York at the start of the war, no matter how much they tried, free black men could not sign up to fight for the Union. Undeterred, many like Samuel Bell who is buried in Rye, took it upon themselves to go to Boston and signed up to serve with the 54th Massachusetts Regiment, which did allow free blacks to fight. This was the “Glory” troop of soldiers forever immortalized in the Robert Shaw memorial by sculptor Augustus St. Gaudens.  I urge all of you if you have not already done so to visit the historic African Cemetery in our own backyard. It is an extraordinary park-like haven. The collaborative research of veterans, volunteers and historians from Rye and Port Chester have discovered no fewer than 37 US soldiers (with 22 participants from the Civil War).

Today we still lay flags and wreaths at the graves of our fallen, creating and preserving monuments that bear witness to the courage of these men and women. But more than plaques or ribbons, best remembered are the shining spirits and fearless mettle of the remarkable sons and daughters of our hometown who are no longer with us. We can honor their sacrifices by living our own lives of consequence. By passing down a tradition of respect for our armed forces and our veterans to our children. By preserving the physical places and spiritual touchstones that inspired their selfless acts, we will be inspired every day to remember and live peaceably and cooperatively with others. I want to close by reading dedications inscribed in Chauncey Ives’ book by Ives and Theodore Fremd, President of the Village Board of Trustees of Rye to his colleagues in the Village of Port Chester.

On page 97, Ives again bullets the over achievements of those Rye citizens filling and exceeding their volunteer recruits to being the first town in the Congressional District to fill its quota in the War of the Union. “The Town responded promptly to every call for troops, either by National or State Governments and provided bountifully for the families of those who went forth to sustain the honor of their country.”

Let us take those last words to heart and provide truly bountiful thanks today for the sacrifices of our men and women in the armed forces and the families of servicemen everywhere.  Thank you.