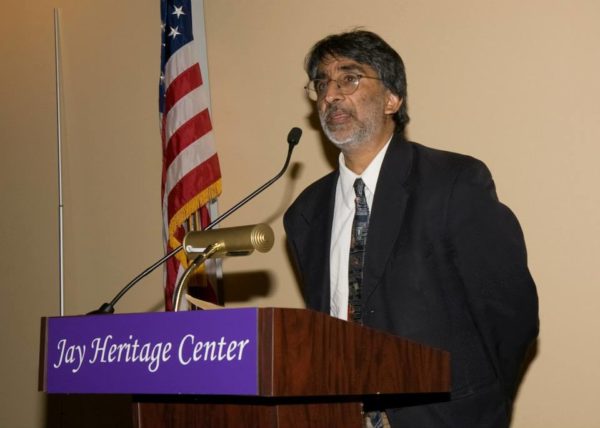 JHC hosted its first Constitutional Conference on September 18-20, 2013 in concert with the Foundation for Law, Justice and Society (FLJS) and the Centre for Socio-Legal Studies, University of Oxford and Wolfson College, Oxford. The 2 day event started with a free lecture and book signing by renowned scholar Prof. Akhil Reed Amar followed by a symposium for academics from the US and around the world led by Prof. Denis Galligan discussing Populism and Constitutions.

In launching the first of what it hopes to be many academic conferences at its site, the Jay Heritage Center faced a welcome challenge: to select a topic, a keynote speaker, and partner institutions sure to generate vigorous, enlightened and thought provoking discussions. Suitably inspired by our nation’s observation of Constitution Week each fall, JHC asked acclaimed scholar, author and Yale Law School Professor, Akhil Reed Amar to speak “On the Nature of Constitutions.” Amar’s free public lecture set the tone for a lively 2 day symposium titled “Populism and Constitutions” organized in concert with the Foundation for Law, Justice and Society (FLJS), the Centre for Socio-Legal Studies, University of Oxford and Wolfson College, Oxford, FLJS invited prominent legal and political history experts from the United States (Harvard, Yale, University of Georgia, Stanford, NYU, Columbia, Cardoza and UC Berkeley), from England (Oxford and Sussex), and Romania (Sofia) to assemble, write and defend papers with titles as varied as “Keepers of the Common Weale: The People in the Constitution” to “Populism in Constitutions” delivered by Harvard Professor Richard Parker who supports a constitutional amendment to protect the American flag. Participants included Cas Mudde, Amir Paz-Fuchs, Pasquale Pasquino, Cristobal Rovera, Daniel Smilov, Matthew Diller, Bernadette Myler, Paulina Ochoa Espejo, Lawrence Rosenthal and Nadia Urbanati.

Recent populist uprisings in our global community gave each participant’s topic significant contemporary relevance. Based on attendance at Prof. Amar’s talk and glowing reactions from scholars who exchanged ideas at the Jay Estate’s inspirational setting, the event was a huge success.  It was fitting for Prof. Amar to speak exactly 226 years after our most valued legal instrument, the US Constitution, was presented to the American populace, “We the People.” In his talk Professor Amar likened that September 1787 event to the big bang creation of the universe – he divided history into BC – Before the Constitution – and AD – After the Document. In no previous period in time had a government presented a democratic constitution to be ratified by its citizens. Brief flickers of democracy preceded the US (most notably the Greek and early Roman states) only to die out and even those efforts were mandated by elders and not subject to citizen approval.

In front of a packed audience of legal peers and colleagues and interested citizens, Prof. Amar stressed that what truly makes the US Constitution great is not its creation but its endorsement, and when necessary, its modification, by its citizens over the past two and a quarter centuries and the capacity for future refinements. Most Americans are familiar with the Bill of Rights and acquainted with some of the Constitution’s major amendments. However few attending were aware that the bulk of these modifications were essentially made during three periods of US History in a direct response to patriotically active but practicably voiceless segments of the population who were seeking inclusion in the democratic process. Amar explained how initially the document defined States’ rights but at later stages necessarily was amended to extend individuals rights – i.e. enslaved individuals and women – giving them equality and the right to vote.

Deeming the Constitution to be an essential but ever evolving work in progress, Prof. Amar opined about which amendments we might see created in our near future. In Q & A’s following his talk he emphasized the importance of understanding how documents outside the Constitution like the Federalist Papers, The Gettysburg Address and Martin Luther King’s “I Have a Dream” speech have holistically influenced our interpretation and our amendment of this most cherished document. 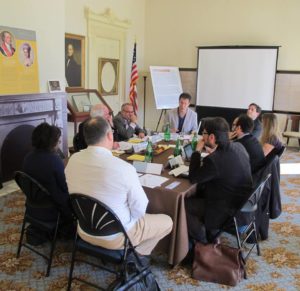