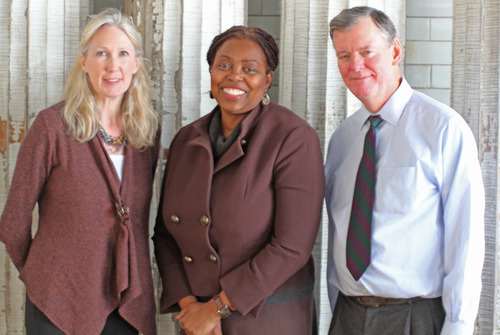 The audience thoroughly enjoyed Mr. Pultz’s presentation of his film in progress “The Bones Speak: The Spring Street Story” which is about an integrated 19th century church in lower Manhattan that was at the epicenter of both rare racial acceptance of the era as well as violent prejudice which escalated into the bloody Abolitionist riots of 1834. This landmark site had been long forgotten, the congregants dispersed, the church demolished and paved over as a parking lot until it was rediscovered by community volunteers who halted construction at the venue just in time to remove burial remains of approximately 90 individuals for study and re-interment. With slides and video clips, Mr. Pultz explained how modern day archaeologists are now identifying the occupations, diets and other biological markers of the very diverse denizens of the “Five Points” neighborhood. This will be Mr. Pultz’s 2nd human rights focused documentary. An earlier award- winning film, “Eternal Memory: Voices from the Great Terror” narrated by Meryl Streep, examined the Stalinist purges and terror in the former Soviet Union during the 1930s and ’40s.

Guests were equally engaged by Dr. Armstead’s reading of original letters and a diary penned by Maryland slave, James F. Brown, who ran away to Fishkill, New York after his owners reneged upon a promise to manumit him. She told the story of how this literate and highly motivated man who rose from coachman to master gardener, and distinguished himself through his knowledge of horticulture, including associating himself with America’s earliest landscape architect, A J Downing. Brown’s “craft” helped him defy the stereotypical racial and class conceptions of the African American man as farmhand or labourer, ultimately allowing him to become financially independent, purchase the freedom of his wife, and vote as a citizen of New York. Armstead’s ongoing research includes time that Brown lived with NY Manumission Society President, Peter Augustus Jay and his family from 1831 – 1832. Professor Armstead specializes in U.S. social and cultural history, with an emphasis on urban and African American history. She was awarded the Frederick Douglass Award by the Association for the Study of Afro-American Life and History.

The event was co-sponsored by the Westchester Historical Society, the African American Men of Westchester and the Clunie Branch of ASALH.

John Jay’s childhood home in Rye, New York is one of 13 sites on Westchester County’s African American Heritage Trail. In 2013, this National Historic Landmark was also added to New York State’s Path Through History for its importance to understanding the history of Civil Rights