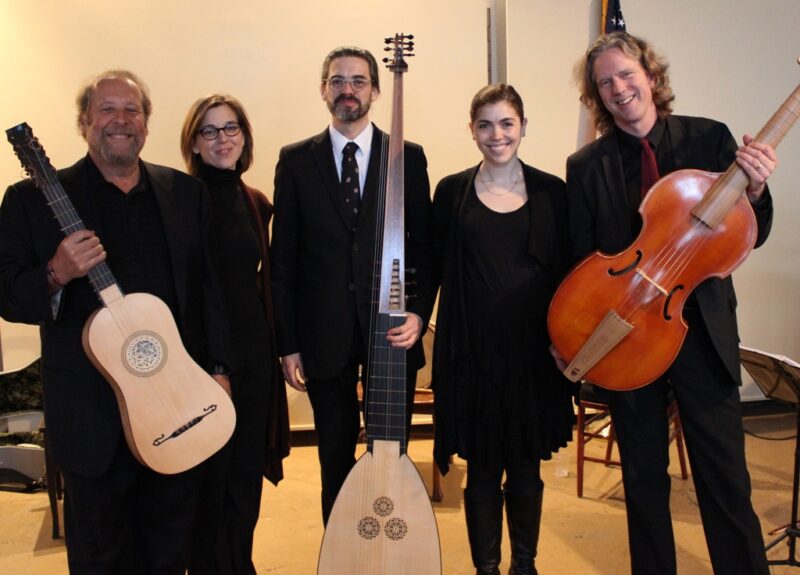 On Sunday, February 23rd, JHC members and friends were transported into the late 18th century and experienced what “John Jay’s Night at The Opera” might have been like as he and his wife Sarah Livingston attended concerts both home in the American colonies and abroad in England and France with diplomatic friends. The afternoon featured soprano Catherine Leech accompanied by Leah Gale Nelson on violin, Daniel Swenberg on theorbo, Paul Shipper, on lute and tenor Grant Herreid on lute as well.

Grant, who is Director of Yale’s Baroque Opera Project curated a selection of historical pieces which traced the introduction of opera into our young’s nation sphere of awareness. For example, he included a work by Rameau that the Founding Couple heard shortly after Jay helped negotiate the Treaty of Paris: On September 3, 1783, the Marquis de Lafayette wrote, The Ms. de Lafayette Would propose Mr. and Mrs. Jay’s Going on Friday Next to the Opera House, Where a Celebrated piece “Castor et pollux” is to be Acted, and Where He Has got a Box. This was the second concert in a series of three events that have exceptional resonance given their landmark setting – the Jay Estate in Rye, NY.

Another concert is scheduled for Sunday March 23rd at 3pm. It is titled “The Political Muse: A Musical History of the Forming of Our Nation” and like it’s predecessors, tailored to John Jay’s life and experiences. It will highlight songs, ballads and dances from colonial times, through the Revolutionary War, and into the first decades of the Republic. As a primer on how early American music evolved, it will illustrate the intersection of politics and music – guests will be familiarized with The Battle of Trenton, and the musical manifestations of the Federalist-Anti-Federalist debate.