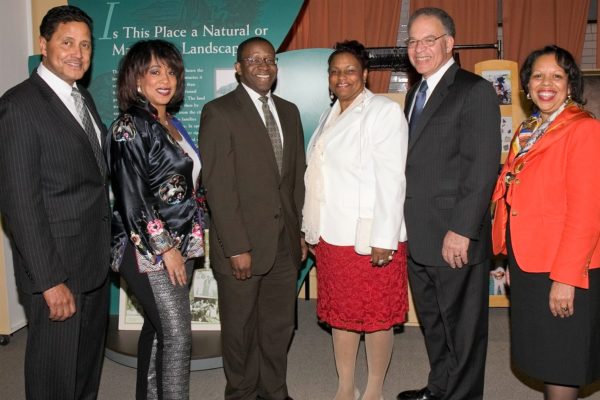 The Trailblazers Advisory Board of Westchester County honored five African Americans for their professional and civic accomplishments at the annual Black History Month and Trailblazers Award ceremony Thursday. For the first time, the event was held at the historic Jay Property, located at 210 Boston Post Road, Rye.

Trailblazers is sponsored by the Office of County Executive Robert P. Astorino, the County Board of Legislators and the county’s African American Advisory Board. “It is a pleasure once again to sponsor Trailblazers as a way to pay tribute to five of Westchester’s extraordinary African Americans, who have accomplished so much,” said Astorino. “I am especially happy that we are celebrating this year at the Jay Property, such a beautiful and historically significant location. I thank the county’s African American Advisory Board for organizing this great annual event.”

The Jay Estate, the boyhood home of New York’s only native Founding Father and the nation’s first Chief Justice, John Jay, was designated as a National Historic Landmark in 1993 as part of the Boston Post Road Historic District. It was also named to the Westchester County African American Heritage Trail in 2004. Jay was a founder and past president of the Manumission Society of New York, which advocated abolition and established schools to educate free African Americans. As governor of New York, Jay signed the Gradual Emancipation Act into law in 1799. The Rye farm was a place of refuge for Jay throughout his career.

Barbara L. Edwards, chair of the advisory board, said the Jay Estate is an ideal location for the Trailblazers Awards ceremony, which serves to spotlight yesterday’s visionaries and today’s leaders. “Trailblazers embody the same kind of tenacity and commitment to continuing the legacy of our ancestors, while making an indelible impact for future generations,” she said. Westchester County recently approved a 10-year agreement with the Jay Heritage Center, a non-profit that assumed responsibility for the full restoration and long-term maintenance of the Jay Property. The agreement is designed to ensure the preservation of the property while also advancing shared goals of promoting heritage tourism by making historic resources more accessible to the public.

Hon. La Tia W. Martin: The Betty Shabazz Award for Social Justice. New York State Supreme Court Justice Martin has had a long, successful career as a lawyer and justice of the court. After graduating from Rutgers University School of Law, Justice Martin was appointed as an Assistant District Attorney with the Bronx County District Attorney’s Office. Soon after, she was appointed as the Inspector General of four New York City agencies, where she was responsible for the overall supervision of major criminal and administrative investigations. Justice Martin also served as General Counsel for the New York City Office of the Sheriff. Former New York City Mayor Rudolph Giuliani appointed Justice Martin to the Criminal Court bench during his tenure. After being appointed a judge, Martin was assigned to the Bronx County Criminal Domestic Violence Court, where she played a major role. Under her leadership, the specialized court provided counseling services and enhanced resources to both victims and defendants. Her initiatives balanced the interests of crime victims, the community at large and sentenced offenders. As a result of the success of the Domestic Violence Court, it was assigned as the domestic violence model for the entire City of New York. After being elected to the Bronx County Supreme Court, Justice Martin presided over issues relating to domestic violence, equitable distribution of property and child custody and visitation. Due to her expertise in the field, Judge Martin was assigned to the Westchester County Supreme Court Matrimonial Part to offer assistance on matrimonial cases involving complex financial matters. In her spare time, Justice Martin serves as president of the National Association of Women Judges, is an officer of the Westchester County Chapter of the Links, Inc., and is an adjunct faculty member at Pace University’s School of Law. Furthermore, Justice Martin established the “Summer Justice Academy for Young Women,” which introduces promising underserved female students to the study of law.

Dr. Thomas J. Price, Jr.: The Dr. Valiere Alcena Award for Health and Human Services. Dr. Price, Ohio native and New Rochelle resident, graduated from the University Of Cincinnati College Of Medicine and conducted his fellowship in cardiology at Harlem Hospital and Columbia University. Dr. Price’s career in medicine is extensive, varied and extremely successful. He currently serves as Associate Director of Cardiology at Montefiore in Mount Vernon and Attending Cardiologist at Montefiore in New Rochelle and Lawrence Hospital Center in Bronxville. In addition, he is a medical consultant for several law firms and government agencies, including Westchester County’s Department of Corrections. Dr. Price is a member of several boards, including the American Heart Association Northeast Affiliate Board of Directors, the National Board of Directors of the Association of Black Cardiologists and the Westchester County Blue-Ribbon Panel on Health Care Disparities. He is the recipient of many distinguished awards and recognitions, including being named to the Castle Connolly list of Best Doctors in Metro New York several years in a row, for his passion and dedication to the health care industry and his patients.

Hugh B. Price: The Whitney M. Young Jr. Award for Civic Engagement. Lawyer, author, journalist, producer andeducator, Price has dedicated his life to empowering African Americans. Price’s interests, which include education, equal opportunity, civil rights and urban affairs, perfectly define the path of his career.
After graduating Yale Law School, Price began his career representing low-income individuals in New Haven, Conn. As CEO and president of the National Urban League, Price led the way in reviving and strengthening the organization and its mission to create equal opportunity for African Americans. Price also served as a member of the editorial board of the The New York Times. The majority of his editorials focused on an array of public policy issues including public education, welfare, criminal justice and telecommunications.

Price served as senior vice president of the public television station WNET/Thirteen, where he developed and produced many notable series. He was also appointed vice president of the Rockefeller Foundation, where he oversaw its domestic investments to improve education for at-risk youth and increase opportunities for people of color. Price is currently a Nonresident Senior Fellow at the Brookings Institution, the nation’s oldest think tank, and he recently ended his time as a visiting professor at Princeton University. In addition to his many career paths, Price is the author of three books. Much of his written work has been published in newspapers and magazines, and Price has made numerous appearances on notable television and radio programs.
His activities, past and present, are many. Price currently serves on several boards including Metropolitan Life Insurance Company, Georgetown University, Verizon and the Jacob Burns Films Center. He is the recipient of many distinguished awards and honorary degrees in recognition of his tireless energy and accomplishments.

Elizabeth G. McCorvey:  The The Whitney M. Young Community Service Award. Through her professional work, McCorvey has improved the lives of so many Westchester residents by going above and beyond in service of others. McCorvey, a Peekskill resident, became Executive Director of the Family Resource Center in 2007 after the passing of her mother, Vera L. McCorvey, who founded the center. McCorvey is described by all who know her as a dedicated, energetic, warm and selfless woman committed to carrying out the legacy of her late mother, which was to provide shelter, clothing and food to people who are impoverished without pride or prejudice. The Family Resource Center is committed to serving all people in need regardless of age, race, ethnic or social background. McCorvey lives out this mission every day by opening her heart and devoting her time to all those who walk through the doors of the center, whether they be clients, volunteers or donors. In addition to her work at the Family Resource Center, McCorvey runs several temporary housing sites, is a civil rights activist, active community leader in the City of Peekskill, and a powerful influence at her local church, Mount Olivet. McCorvey has received numerous honors from many different organizations and civic groups in Westchester County in recognition of her passion and commitment to serving her community.

Rosa Kittrell Barksdale: The Madame C. J. Walker Award for Economic Development. Barksdale, a Mount Vernon native, has a long and accomplished career as the owner of her own home-care agency, Barksdale Home Care Services, Corp. A registered nurse, Kittrell has dedicated her life to serving others through her various careers in the health care profession.