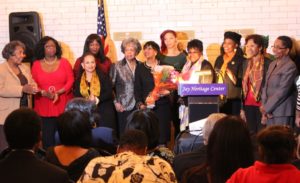 Westchester County honored five African-Americans for their professional and civic accomplishments at the 16th annual Black History Month and Trailblazer Awards ceremony on Thursday. The Trailblazer Awards is sponsored by the Office of County Executive Robert P. Astorino, the county Board of Legislators and the county’s African American Advisory Board. The event was held at the Jay Estate in Rye, NY.

“It is a pleasure once again to sponsor Trailblazers as a way to pay tribute to five of Westchester’s extraordinary African-American leaders who have accomplished so much and inspired so many,” Astorino said. “I thank the county’s African American Advisory Board for organizing this great annual event.”

Barbara L. Edwards, chair of the advisory board, said the Trailblazers spotlights yesterday’s visionaries and today’s leaders in Westchester County.

“As we focus on National African American History month, we celebrate outstanding citizens of Westchester County,” Edwards said. “We pause to reflect on their contributions to our progress. Their steadfast commitment to service, resilient dignity and generous use of talent creates a brighter future for us all. We honor their resolve to help our county live up to its immense promise.”

Dr. Beny J. Primm: The Dr. Valiere Alcena Award for Health and Human Services. Dr. Beny Primm is known internationally for his total commitment to substance abuse treatment and the treatment of the psychological, social and economic ills that fuel substance abuse. For his work, he was appointed to the Presidential Commission on the Human Immunodeficiency Virus Epidemic in 1987 and the Presidential Advisory Council on HIV and AIDS in 2003, and is the recipient of numerous awards, including the 2000 Surgeon General’s Medallion for U.S. Public Health Service in recognition of his lifetime of leadership in mental health and substance abuse treatment in the battle against the AIDS epidemic. Earning his medical degree from the University of Geneva, Dr. Primm has been the executive director of the Addiction Research and Treatment Corporation (A.R.T.C.) of Brooklyn, New York, since its inception in 1969. As one of the largest minority non-profit community-based substance abuse treatment programs in the country, A.R.T.C. provides a multi-modality service and treatment program for approximately 2300 men and women who are primarily members of severely underserved populations. Since 1983, Dr. Primm has served as president of the Urban Resource Institute, a non-profit organization established to provide supportive social and medical services to critical populations within New York City, including shelters for battered women and children, services for mentally challenged individuals, and out-patient alcohol treatment services. From 1989 to 1993, Dr. Primm directed the federal government’s Center for Substance Abuse Treatment, appointed by the Secretary of Health and Human Services. In that capacity, Dr. Primm was responsible for the development of programs, policies and initiatives for the treatment of addictive disorders and the improvement of the quality and effectiveness of substance abuse treatment.

Donald P. Ryder:  The Vertner W. Tandy Award for Housing and Economic Development. Don Ryder is an award-winning architect and educator, who co-founded the black architectural firm Bond Ryder Associates with the late Max Bond. Ryder served in the United States Army for two years and later graduated in 1951 from the University of Illinois with a degree in architecture. Prior to moving to New York City in 1959, Ryder was employed by Skidmore, Owings and Merrill, a large Chicago firm where he worked on the United States Air Force Academy design project. After working for several architecture firms in New York City and serving as Director of Campus Planning for the Borough of Manhattan Community College, Ryder co-founded Bond Ryder Associates in 1968. Over the following 21 years, notable work by Bond Ryder Associates included the Lionel Hampton Houses in Harlem, the Frederick Douglass Houses in Manhattan, the Schomburg Center for Research in Black Culture in Harlem, and the Studio Museum in Harlem. Bond Ryder Associates won awards for its work on the Dr. Martin Luther King, Jr., Center for Social Change in Atlanta, which includes a crypt for Dr. King. Ryder worked as an educator in parallel with his professional practice, first teaching as an adjunct professor at City College of New York in 1972. Ryder eventually became a tenured professor and department chair. In 1984, he was awarded a fellowship in the American Institute of Architects and also served two terms on the New York State Board for Architecture. Ryder married Shaunelle Perry in 1957, with whom he raised three daughters, Lorraine, Natalie and Gail, as well as several grandchildren.

Karen and Sharon Mackey: The Jerry Pinkney Award for Arts. Twin sisters Karen Mackey Witherspoon and Sharon Mackey McGee, residents of Mount Vernon, are artists and educators dedicated to service, especially educating and motivating youth to reach their full potential. After graduating from City College of New York, both Karen and Sharon taught high school English in the New York City public school system for more than 10 years. Although they loved teaching, they wanted to have varied experiences, and worked in several fields. However, passion for education returned them to their roots. Currently, Karen is vice president of the Division of Government, Community & Cultural Affairs, at City College of New York, a board member of the Greater Harlem Chamber of Commerce, and executive director of the Urban Scholars program, an intervention and enrichment program for at-risk youth. Sharon is executive director of Continuing & Professional Studies at City College of New York. Using her previous experience managing the $30 million 1199 SEIU Training and Employment Fund as director of education, Sharon has increased revenue in her current role by 28 percent. As Karen and Sharon became increasingly aware that artists of color were not significantly represented or adequately supported in the larger community, their mission was born and Mackey Twins Art Gallery opened. For their work in the arts the Mackeys have won several awards, including the National Conference of Artists Black Art History Makers Award, the Leroy Campbell Exemplary Art Forum Award, and the Harlem Arts Alliance Service to the Arts Award.

Mae E. Williams: The Betty Shabazz Award for Social Justice. Mae Williams, a resident of Yonkers, is a political activist, educator and past president of the Westchester Black Women’s Political Caucus, Inc. Williams was born in Thomaston, AL, and spent the majority of her life in Birmingham, AL, where she was a part of the Civil Rights Movement. A graduate of Hunter College, Williams is a certified dean and instructor of Christian Education, the founder of the New St. John/Emmanuel Christian Education Institute, and a former president of the Congress of Christian Education of the United Missionary Baptist Association. Williams also studied at New York University and Baruch College. For 15 years, Williams was an instructor and director at the Jewish Guild for the Blind and Visually Impaired in New York City. She is also a former adjunct professor at Lehman College and Iona College, and a business instructor for the Westchester County Economic Opportunity Center. Williams has volunteered and taught at the New York Foundling Hospital for unwed mothers, at the Yonkers Public Library as a literacy volunteer for English as a Second Language students, and at the Remington Boys & Girls Club as a tutor. Williams is currently employed at New York Life Insurance Company, where she has worked as a sales representative and financial professional for almost 25 years. In her career, Williams has helped many individuals and families plan for their financial security and she has earned many achievements and leadership awards. Williams is the proud grandmother of her grandson Jaiden and a proud mother to her daughter Min. Erica R. Williams-Woodley and son-in-law Rev. James C. Woodley.