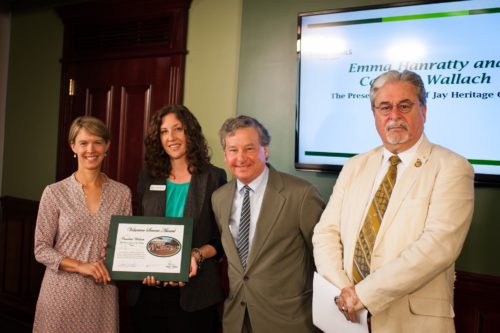 “Volunteers, public officials, and non-profits across New York are the driving forces behind our state’s extensive network of trails and parkland but rarely do these individuals and organizations receive the recognition they so richly deserve. We are pleased to honor these efforts with our 2015 Park & Trail Hero Awards,” said Parks & Trails New York Executive Director Robin Dropkin.

Parks & Trails New York hosted the awards earlier this month on June 10th in Albany. They recognized Caroline Wallach and Emma Hanratty with a Volunteer Service Award for their innovative and sustained effort to recruit volunteers to restore and maintain the culturally and historically significant Jay Heritage Center. Ms. Wallach and Ms. Hanratty are co-founders of the Preservationists of Jay Heritage Center, which has been responsible for undertaking several important maintenance and community outreach events to engage volunteers to beautify the historic site’s grounds in Westchester County. Their work has allowed the Jay Heritage Center to fulfill its mission to educate visitors about the historical significance of the site. New York State Assemblyman Steve Otis was on hand to personally congratulate Caroline and Emma and a representative from Senator George Latimer’s office presented them with a service certificate as well.

Parks & Trails New York is the state’s leading advocate for parks and trails, working since 1985 to expand, protect and promote a network of parks, trails and open spaces throughout the state for use and enjoyment by all. Learn more at www.ptny.org.