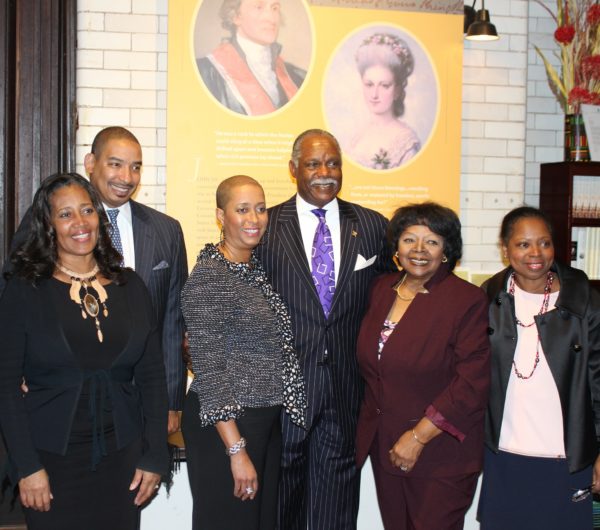 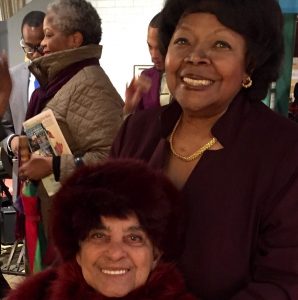 The Trailblazers Advisory Board of Westchester County honored five African Americans for their professional and civic accomplishments at the annual Black History Month and Trailblazers Award ceremony Thursday, February 25. The event was held for the 3rd consecutive year at the Jay Heritage Center, 1 of 13 sites on the African American Heritage Trail of Westchester County. One of the highlights of the evening was music by students of the Amani school and other area schools. Student volunteers from the Mount Vernon Youth Bureau also helped to make the evening a success. The Trailblazer Awards is sponsored by County Executive Robert P. Astorino, the County Board of Legislators and the County’s African American Advisory Board. “This year’s honorees have not just excelled in their fields, they have each had a profound impact on the entire community, from the arts to medicine to criminal justice,” Astorino said. “The county’s African American Advisory Board has once again organized a wonderful event honoring five very special people.” Barbara L. Edwards, chair of the advisory board, said the African American experience in Westchester has shaped the county, and the 2016 Trailblazers honorees carry that legacy. “The history of the African American is inextricably linked to the growth and richness of Westchester County,” said Ms. Edwards. “Our history reflects great triumphs, endurance and resilience of the human spirit.”

Astorino added, “I am especially happy that we are celebrating this year at the Jay Property, such a beautiful and historically significant location.” The Jay Property, the boyhood home of New York’s only native Founding Father and the nation’s first Chief Justice, John Jay, was designated as a National Historic Landmark in 1993 as part of the Boston Post Road Historic District. It was also named to the Westchester County African American Heritage Trail in 2004. Jay was a founder and past president of the Manumission Society of New York, which advocated abolition and established schools to educate free African Americans. As governor of New York, Jay signed the Gradual Emancipation Act into law in 1799. The Rye farm was a place of refuge for Jay throughout his career. Barbara L. Edwards, chair of the advisory board, said the Jay Property is an ideal location for the Trailblazers Awards ceremony, which serves to spotlight yesterday’s visionaries and today’s leaders.“Trailblazers embody the same kind of tenacity and commitment to continuing the legacy of our ancestors, while making an indelible impact for future generations,” she said.

The following Trailblazers were honored:

Sheila Kirk Baptista: The Cab Calloway Award for Arts and Culture — Sheila Kirk Baptista created Lewis & Kirk Music with Beverly Lewis Hunter as a result of collaborative efforts during college in the music department of Shaw University. Lewis & Kirk Music is an unlimited music enterprise, providing professional entertainment services around the world. The company was incorporated in 1998, and has grown steadily with a focus on development of female artists, client specifications and market trends. Currently, their clients include among others, Major League Baseball, JP Morgan Chase, Omega Psi Phi Fraternity, Alpha Kappa Alpha Sorority, Citibank, Yale University, American Legacy/Forbes Magazine, as well as the cities of Yonkers, White Plains and Stamford. The company has produced major events at The Waldorf Astoria, the Stamford Center for the Arts and other venues. The company was especially honored to perform at Inaugural Balls for President Barack Obama in 2009 and 2013. Lewis & Kirk Music has been the executive producer of the annual “Jazz and Blues Labor Day Summerfest Festival” at Union Chapel and The Old Whaling Church on Martha’s Vineyard. As the principal of Lewis & Kirk Music, Ms. Baptista represents more than 20 years of business and music experience. In addition, Ms. Baptista has held positions in the Legal Aid Society, Master Card, Dannon Yogurt and GTE Corporation in the areas of intellectual property, immigration issues and compliance. A resident of Mount Vernon, Ms. Baptista is an active member of Greater Centennial AME Zion Church and Alpha Kappa Alpha Sorority Incorporated.

Erik A. Cliette: The Whitney M. Young Award for Community Service — As New York City Health and Hospitals senior director for the Fund, and director of its signature program: “Guns Down, Life Up” (GDLU), Erik Cliette created a framework for injury prevention coordinators and their related trauma specialists to adopt the GDLU method of addressing gun violence within a health care environment. This work is largely guided by the successful practices initiated by Harlem Hospital’s Injury Prevention Program (HHIPP), which Cliette led for more than 12 years. HHIPP is credited with reducing injury rates to Harlem’s children by more than 60 percent. As a community leader, Cliette lectures and provides workshops that speak to anti-gun violence, financial literacy, pregnancy prevention and social development. Among other mentoring programs and professional affiliations, Erik is noted as the co-founder of the very successful male mentoring project, “Go to High School, Go to College Young Achievers,” and the Metro Manhattan chapter of the Links, Incorporated. Cliette served as a trustee of the Upper Manhattan Empowerment Zone Board. He is a founding member of the New York State Governor’s Traffic Safety Advisory Board. In 2004, Cliette was awarded Columbia University’s Xanthos Prize for outstanding service in the community. Cliette is an author and lecturer for the National Highway Traffic Safety Association (NHTSA) and is responsible for authoring two of eight chapters for NTHSA’s Safe Communities Curriculum. He attended the University of Rochester, where he earned a bachelor’s degree in English and Political Science as well as a master’s degree in Education. Erik Cliette, a Harlem native, is a husband and father living in New Rochelle.

Hon. Helen M. Blackwood: The Betty Shabazz Award For Social Justice — A lifelong resident of Mount Vernon, Helen M. Blackwood was raised by parents who instilled in her the values of hard work, community service, and the importance of education. Her father, Mount Vernon’s own Ronald A. Blackwood, was New York State’s first elected black Mayor. In February 2002, after almost 20 years in the private sector with Coopers and Lybrand, Merrill Lynch and Viacom, Ms. Blackwood accepted the position of First Assistant Corporation Counsel for the City of Mount Vernon. In March, 2009, Mayor Clinton I. Young, Jr., appointed Ms. Blackwood to the position of City Court Judge for Mount Vernon. She was then elected to that position in November 2009. In 2012, Ms. Blackwood was selected to preside over the newly-formed Adolescent Diversion Part, a program for 16 and 17 year old adolescents charged with nonviolent misdemeanor crimes and violations. In 2014, Chief Judge Jonathan Lippman established a new Driving While Intoxicated Part in all New York State courts and Ms. Blackwood was appointed to sit as the presiding judge of this part in Mount Vernon. She is a recipient of the Harlem YMCA Black Achievers Award, and served as a board member and president of the Park Lane Cooperative. Ms. Blackwood was first vice president of the Board of Directors of the Westchester County Medical Center, and she helped establish the Mount Vernon Library Foundation. In 2015, Ms. Blackwood was elected Westchester County Court Judge. She is committed to creating a courtroom where all parties are treated with respect and dignity.

Jewel Kinch-Thomas: The Dillard Boone Award for Cultural Connections and Social Change —Jewel Kinch-Thomas is an arts executive and consultant with 25 years of leadership, management and production experience. She has provided innovative avenues for artistic creativity and community engagement. Over 14 years at the historic Riverside Theatre, Ms. Kinch-Thomas rose from general manager to executive and artistic director, overseeing the day-to-day management of the 250-seat venue, as well as its artistic programs, fundraising and audience development. A champion of artists dedicated to illuminating issues of social justice, she founded and produced annual programs, such as a 12-year New York Family Arts Festival; a six-year Youth Theatre Program; a seven-year African Diaspora Film Festival; Women of Excellence in the Arts; aCultural Animators Series; and an 8-year, highly acclaimed NuDanceprogram. Ms. Kinch-Thomas is also a sought-after consultant, serving as interim executive director of the Harlem Arts Alliance and as the New York representative for International Arts & Artists among others. Ms. Kinch-Thomas is currently the executive director of the Hudson Valley Writers’ Center in Sleepy Hollow. In addition to her Bachelor’s of Science degree from Fordham University, Ms. Kinch-Thomas has earned certificates in Arts Administration from New York University, Columbia University’s Arts Leadership Institute and the Arts & Business Council of New York. Ms. Kinch-Thomas was selected for the Women in Power: Leadership for the 21st Century program of the Kennedy School of Government at Harvard University. Ms. Kinch-Thomas resides in New Rochelle with her husband, a cultural journalist and jazz expert, and her two sons.

Dr. Enrique Riggs: The Dr. Valiere Alcena Award for Health and Human Services — U.S. Army Col. (Retired) Dr. Enrique A. Riggs’s career has brought him around the world. A resident of White Plains, Dr. Riggs holds a Psychology degree from Central State University, a degree in Counseling from SUNY Albany, as well as a degree in Clinical Dentistry from Howard University. He was an enlisted man in the U.S. Army from 1968 to 1974, and then returned as a commissioned officer in 1979, retiring from active duty in 2004 as a colonel. Among his many assignments, Dr. Riggs served in Desert Storm and Desert Shield, and stateside as Commander of Army Dental Command at Fort Bragg, Walter Reed Army Medical Center and Dover Air Force Base. Dr. Riggs was the sole representative of the Army’s New York County Dental Society team in the aftermath of the attacks on September 11, 2001, and the crash of American Airlines flight #587. Dr. Riggs has also been in private practice for many years, while lending his expertise at a municipal level, including the NYS Department of Correctional services. The holder of an MBA from Iona College, Dr. Riggs also has experience at the highest levels of trade on a global scale. He co-founded the Small Business Stock Exchange of America, an international equity exchange established to bring small companies to the public marketplace, that otherwise could not qualify for listing on any other established U.S. exchanges. Dr. Riggs is also a partner in Consortium for Africa, a group of international business developers with major projects in the Middle East and West Africa, including the Democratic Republic of Congo, Gabon and Cameroon. Dr. Riggs is a driving force behind the Central State University/Ghana Project, an effort to establish and maintain a working relationship with Ghana to resolve its water issues bringing potable water to Accra from the Volta River.