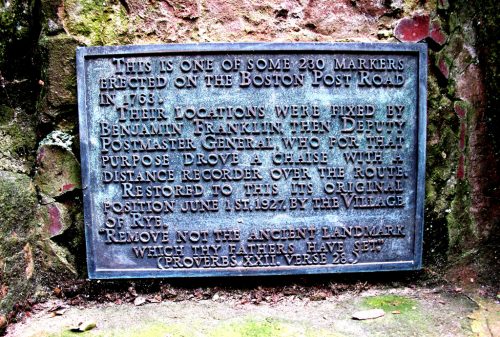 by Gabriel Rom for the Journal News

An almost century-long debate has simmered over the historical authenticity of Rye’s three mile markers.

Each of Rye’s three historical mile markers has a plaque with a simple, biblical command: “Remove not the ancient landmark which thy fathers have set.”

Almost 90 years later, the City Council is considering just that.

The quote, from Proverbs, was inscribed in 1927 by John Motley Morehead III. Morehead looms larger than life in Rye lore. He was the city’s first president — the forerunner of today’s mayor — and his portrait gazes sternly over the courtroom lobby of City Hall, a building he designed and helped build.

“There’s no way in the world I would go against the very strongly worded directive of my illustrious predecessor,” said current Mayor Joe Sack. “I would rather not get struck by lightning.”

Historians say the squat, sandstone signposts once marked distances along Boston Post Road between Manhattan and Boston. Marker 24, embedded in a wall outside the Jay Heritage Center, has led a relatively peaceful existence. But 25 and 26 have both stirred debate ever since Morehead’s directive.

It’s mile marker 25 that has the city’s attention this year.

Embedded in a stone wall along a quiet stretch of the road, the milepost is difficult to see and deteriorating. Morehead’s eroding plaque was removed by the city in 2013 to keep it from further decay. Because of that, the Rye Landmarks Advisory Committee wants it to be declared a landmark, moved a quarter of a mile up the road and mounted in a spot near the Osborn School. After months of public hearings, the committee plans to recommend that the city spend about $14,000 on the move.

“Time, weather and vandalism are the enemies of mile markers,” said Maurio Sax, the committee’s chairman. “We want to preserve its dignity and make it available for the community.”

The gatekeepers of city history, however, have a different view. The Rye Historical Society and the Jay Heritage Center argue that marker 25 shouldn’t be moved. History, they say, should be left untouched.

“You don’t move the Statue of Liberty to Times Square just so everyone can see it,” said Suzanne Clary, president of the Jay Heritage Center. “To be true to the past you can’t reinvent it.”

The Rye City Council is expected to decide on the matter at its March 1 meeting.

This is not the first time the markers have caused a hubbub, it’s only the most recent. Rye’s “ancient landmarks” and Sack’s “illustrious predecessor” are both part of a historical drama that has almost as many twists and turns as the Boston Post Road itself.

Benjamin Franklin is credited with creating a system of mileposts to aid travelers between New York and Boston when he served as postmaster general for the American Colonies during the 1750s.

According to Morehead’s inscriptions on the markers, the Founding Father himself drove a wagon along the route and used a self-made odometer to measure the distances and have the reddish posts installed. So was born the legend of the “Franklin mile markers.”

But local historians say the story is just that — a story.

Franklin, Clary said, had little to do with the mile markers that Morehead admonished his successors to protect. Historians agree that most of the milestones in Westchester County — Rye included — were probably installed more than a decade after Franklin’s death in 1790.

No Franklin, no Revolutionary-era romanticism. But still, history.

Another milepost that began a brouhaha is the now locally-infamous marker 26, which, somehow, ended up in the hands of Amelia Earhart’s husband, George Putnam, when the road was widened during the 1920s. An enraged Morehead, who revered Rye history, threatened to sue Putnam for the stone’s return, Clary said.

Putnam relented, and the stone eventually found its way to a spot outside of Rye’s Christ Church, where it sat undisturbed for at least 50 years, she said.

Ignoring Morehead’s biblical warning, the city, at the advice of the Landmarks Committee, had marker 26 moved to City Hall in 2012. The cherished historical relic now sits unceremoniously in a long-unused phone booth, not 10 feet from Morehead’s portrait.

“It has been shunted aside,” Clary said. “It’s no longer a mile marker, but an artifact.”

For Mayor Sack, marker 26’s undignified resting place serves as a cautionary tale as the council takes up the fate of marker 25.

“Morehead is spinning in his grave,” he said.