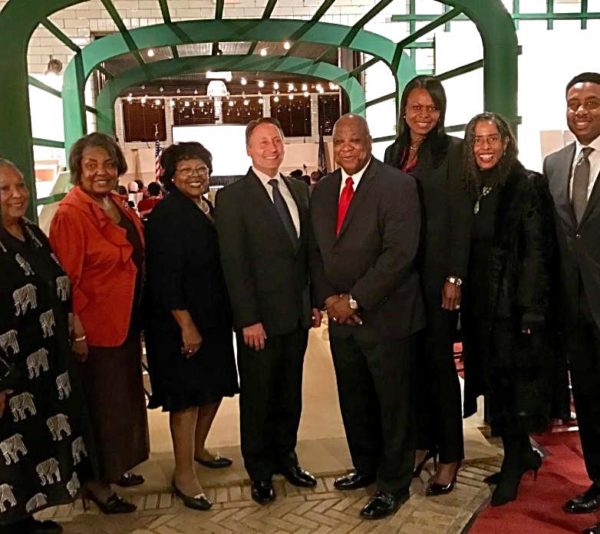 In celebration of Black History Month, Westchester County held the 18th annual “Trailblazer Awards” ceremony at the Jay Heritage Center. Each year, the county recognizes local African-Americans who have made significant civic contributions in the community in the fields of medicine, human services, culture and the arts.

The Elizabeth Catlett Award For Arts and Culture: Vinnie Bagwell – Vinnie Bagwell was born in Yonkers, NY, and grew up in the Town of Greenburgh. An alumna of Morgan State University, she is an untutored artist, and began sculpting in 1993. Her portraits articulate the human Spirit, and have souls which grandly speak for themselves. Vinnie Bagwell co-found Art on Main Street/Yonkers, Inc. and Enslaved Africans’ Rain Garden, Inc., non-profit, multi-cultural arts organizations to heighten the awareness of the arts as an agent of social, educational, and economic revitalization for Yonkers Downtown-Waterfront district. Her first public artwork, “The First Lady of Jazz Ella Fitzgerald” was commissioned by the City of Yonkers. It is the first sculpture of a contemporary African-American woman to be commissioned by a municipality in the United States. Her other public artworks include: “Frederick Douglass Circle” at Hofstra University (the maquette is part of the permanent collection at the Frederick Douglass Museum and Cultural Center), “Legacies” at Chickasaw Heritage Park, Memphis, TN, and “The Man in the Arena” Roosevelt Senior High School in DC.

Vinnie Bagwell is currently leading the conception and development of “The Enslaved Africans’ Rain Garden”, an urban-heritage sculpture garden which will pay honor the legacy of first enslaved Africans to be freed by law in the United States. She has also been commissioned to create a memorial of “Walter “Doc” Hurley, a legendary educator in Hartford, which will become the first public artwork of a contemporary African-American man in the State of Connecticut.

The Betty Shabazz Award For Civic Engagement: Eddie Mae Barnes – An only child born in Bartow, FL, Hon. Eddie Mae (Thompson) Barnes has lived in the Town of Greenburgh for more than 40 years, where she served her community as a councilwoman from 1992-2007. Eddie Mae received a Bachelor’s of Science degree in Nursing from Dillard University in New Orleans, Lousiana, and continued on to Teachers College/Columbia University where she earned a Masters degree in Nursing Administration and Psychiatric Nursing. Eddie Mae’s career began at Payne Whitney Clinic of New York Hospital/Cornell Medical Center (now New York Presbyterian Hospital), where she became the first African-American to hold the position of Director of Nursing. For 32 years, Eddie Mae was Director of Nursing for Rye Hospital CenterEddie Mae was a member of Sigma Theta Tau, the international honor society for Nursing. She was selected to the “Who’s Who” in Psychiatric Nursing, and she is listed in the 2005-2006 Edition of Empire “Who’s Who” of Empowering Executives and Professionals. Eddie Mae has given her time to numerous organizations throughout Westchester County, including Cornell Cooperative Extension; Excellence for Black Children and the Westchester Human Rights Commission.  She is currently an active member of Alpha Kappa Alpha Sorority; Black Democrats of Westchester; Greenburgh Chapter of the Westchester Black Women’s Political Caucus; Westchester Educational Opportunity Advisory Board; Most recently, Eddie Mae was  appointed to the Westchester Rent Guidelines Board. She is a Life member of the NAACP.

The Rev. L. Alger Adams Award For Publishing: Sandra Blackwell – Sandra Blackwell, the eldest daughter of the late Reverend Russell and Mrs. Dorothy Tarleton Blackwell, is a native of South Carolina, where she attended Benedict College. After graduating with a Bachelor of Arts degree in 1966, Ms. Blackwell moved to Westchester County, where she began a 40-year career as a special education teacher, earning her Master of Science degree from SUNY New Paltz, in 1971. Over the years, Ms. Blackwell has been a political force in Westchester, playing vital roles in many organizations including the Yorktown Democratic Committee, the Westchester Black Women’s Political Caucus and the Black Democrats of Westchester. In January 2009, after the passing of, M. Paul Redd, Sr., Ms. Blackwell became the publisher and editor of The Westchester County Press, the county’s only African American newspaper, crafting the paper into the format that it has today. Sandra Blackwell has been recognized by Governor Mario Cuomo, having appointed her to serve on the Advisory Council to the New York State Division of Human Rights in 1984 and 1986. Cuomo also appointed Ms. Blackwell to serve on the governing Council of the College of Optometry of the State University of New York. She also served on the Association of Council Members and College Trustees of the State University of New York. When asked her plans for the future, Sandra Blackwell said, “My goal now is to continue serving the Westchester County African American community by telling our story…”

The Robert C. Weaver Award For Housing: Mack Carter – A native of South Carolina, and now living in White Plains, Mack L. Carter, Jr. and his wife, Dr. Evelyne Eusebe-Carter, have 3 adult children; two sons and a daughter. After 4 years of service in the U.S. Air Force, Mack earned associates and bachelor’s degrees from Long Island University. Soon thereafter, he received a Master’s Degree in Community Health and Healthcare Administration, followed by a second Master’s Degree in business. During his career in Hospital Administration, Mack rose to President and CEO of Westchester Medical Center, the first African-American to be appointed by Westchester County. He held this position until 1995, when Mack entered the private sector as a senior manager with an HMO and healthcare finance company. In 2001, the Mayor of the City of White Plains appointed Mack to the Executive staff of the White Plains Housing Authority, and in 2002 was named executive director. Under his direction, the Authority achieved a “High Performer rating by the Department of Housing and Urban Development.

Having been made aware of poor test scores among minority youth in White Plains, Mack took the initiative to partner with the White Plains Youth Bureau, the Public School System and the Public Library to design and implement a literacy program for children living in Public Housing. Starting with 15 students in 2002, the program has become a part of the curriculum of the White Plains School District. Mack sits on the Board of the Public Housing Authorities Directors Association (PHADA), and is President of the New York State PHADA.

The Whitney M. Young Jr. Award For Human Services: Nathaniel Fields – Nathaniel Fields, born and raised in Brooklyn, has firsthand knowledge of the issues facing New York’s most vulnerable communities, and he has dedicated his life to affecting positive changes for victims of domestic violence. As president and CEO of the Urban Resource Institute (URI), he oversees the organization’s strategic vision and holistic functioning to bring about that very sort of change. When he came to URI in 1996, Mr. Fields was tasked with identifying and steering URI’s focus towards domestic violence as a pivotal issue central to the building of safe and strong communities. Mr. Fields was tapped to helm URI in 2012, and immediately took a hands-on approach, coordinating all aspects of the organization shaping URI into the warm, community-based organization it is today. One of the most innovative programs developed at URI during Nathaniel’s tenure is the URI People and Animals Living Safely (URIPALS) program – New York City’s only program allowing domestic violence victims to live in shelter apartments with their beloved pets. Mr. Fields holds a bachelor’s degree in history, focusing on Black and Hispanic studies, as well as a Master of Social Work degree from Fordham University. Mr. Fields sits on many nonprofit boards including the Human Services Council, and has chaired the New York City Coalition of Domestic Violence Residential Providers. He spends his free time with family, exercising and traveling. Nathaniel Fields lives in White Plains with his wife and children.

The Dr. Valiere Alcena Award For Health Services: Judith Watson, RN – A native of Jamaica, West Indies, Judith Watson migrated to White Plains, NY in 1975. After high school, she enlisted in the United States Army where she was stationed on Ford Island, Hawaii. Following discharge from active duty in 1990, she continued to serve in the United States Army Reserves where she achieved the rank of Sergeant E-5. After her discharge from active duty in 1990, Judith enrolled in the Leinhard School of Nursing at Pace University, graduating in 1994 with a Bachelor of Science Degree in Nursing. Judith earned her Master of Public Health Degree from New York Medical College, Valhalla, in 2007. Shortly following graduation from Pace, Judith was hired as a nurse by what was then Greenburgh Health Center, Inc. (GHC), where she has been for 22 years. GHC, a federally-qualified community health center, provides patient-centered comprehensive primary and preventative medical, dental and specialty health care services to more than 31,000 patients, with over 96,000 annual patient visits. She was appointed executive director of GHC in 2002. She has worked with her mentor, Ms. Carole Morris the entire time, helping to lead an organization that provides quality health care for so many. Judith spends her spare time with her loving family (her mother, aunt and herself are rarely seen apart). She enjoys movies, meditation and jogging.