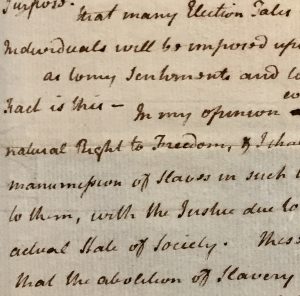 An original February 27, 1792 letter written by John Jay explaining his opposition to the institution of slavery has been donated to the JHC Archives. In this rare document, Jay states his belief that “every man of every color and description has a natural right to freedom” however he also explains why he believes the “actual state of society” would only allow for emancipation to be effected gradually.

This letter was penned in the same year that John Jay ran as the Federalist candidate for Governor of New York State against Democratic-Republican George Clinton. Jay’s firm anti-slavery position and his association with assemblies like the Manumission Society (where Jay served as the first President and Alexander Hamilton later served as the second president) were wielded as weapons against him in the press during this very bitter and closely contested election. Although Jay eventually won the popular vote, he lost the close contest on balloting technicalities. Nevertheless, he upheld his commitment “to protect a poor and friendless race of men, their wives and children from the snares and violence of men stealers, to provide instruction for children who are destitute of the means of education…”  Jay won the following gubernatorial race and in  1799 signed the Gradual Emancipation Act into law.

Over 1000 students and their teachers are currently scheduled to visit the Jay Estate this spring to see Striving for Freedom, JHC’s signature play about  the abolition of slavery in New York; they will be among the first to see this powerful  letter in person! If you would like to find out how your school can schedule a visit, please email us at Jay Heritage Center

Thanks to a generous grant from Con Edison, the program is FREE and Title 1 schools are also eligible for FREE transportation.