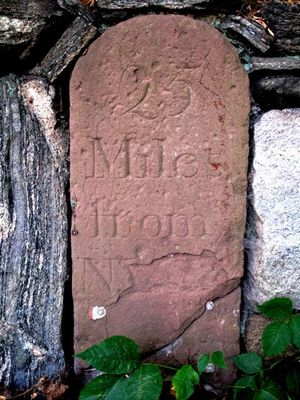 by Gabriel Rom for the Journal News

A controversial $14,000 plan to relocate one of the city’s three historical mile markers has been tabled. The 200-year-old stone, located along a quiet stretch of Boston Post Road, will remain untouched after a months-long debate over both its past and future.

“We pulled out because we didn’t feel we had full support from the city council,” said Maurio Sax, chairman of the Rye Landmarks Advisory Committee, the group which had pushed for relocating and refurbishing the historic marker.

Mile marker 25 has been the source of discussion between the city council, the Landmarks Advisory Committee and the city’s powerful historical societies. The Rye Historical Society and the Jay Heritage Center have long said the marker shouldn’t be moved in order to preserve its historical integrity while Sax had argued the stone should be relocated and repaired.

“The Advisory Committee’s withdrawal of its proposal to move Mile Marker #25 is a landmark outcome for everyone concerned,” said Suzanne Clary, president of the Jay Heritage Center. “It speaks to the value of respectful consensus building and public participation in government.”

The marker, which some in Rye had thought was installed by Benjamin Franklin, was likely built more than a decade after Franklin’s death in 1790. Rye historians say the signpost once marked distances along Boston Post Road between Manhattan and Boston.

“Perhaps we can use this moment to distinguish history from legends and lore,” Clary said.
An eroding plaque on the marker was removed by the city in 2013 to keep it from further decay. The plaque, installed by the city’s first mayor, John Motley Morehead III, had a biblical inscription on it: “Remove not the ancient landmark which thy fathers have set.”

Current Mayor Joe Sack welcomed the development.
“The mile marker is staying where it is, which is good news,” Sack said. “Now we can focus on helping to preserve it in place.”
Clary said she remains wary of plans to restore the marker or give it signage. No specific proposal has yet been presented to the city council.