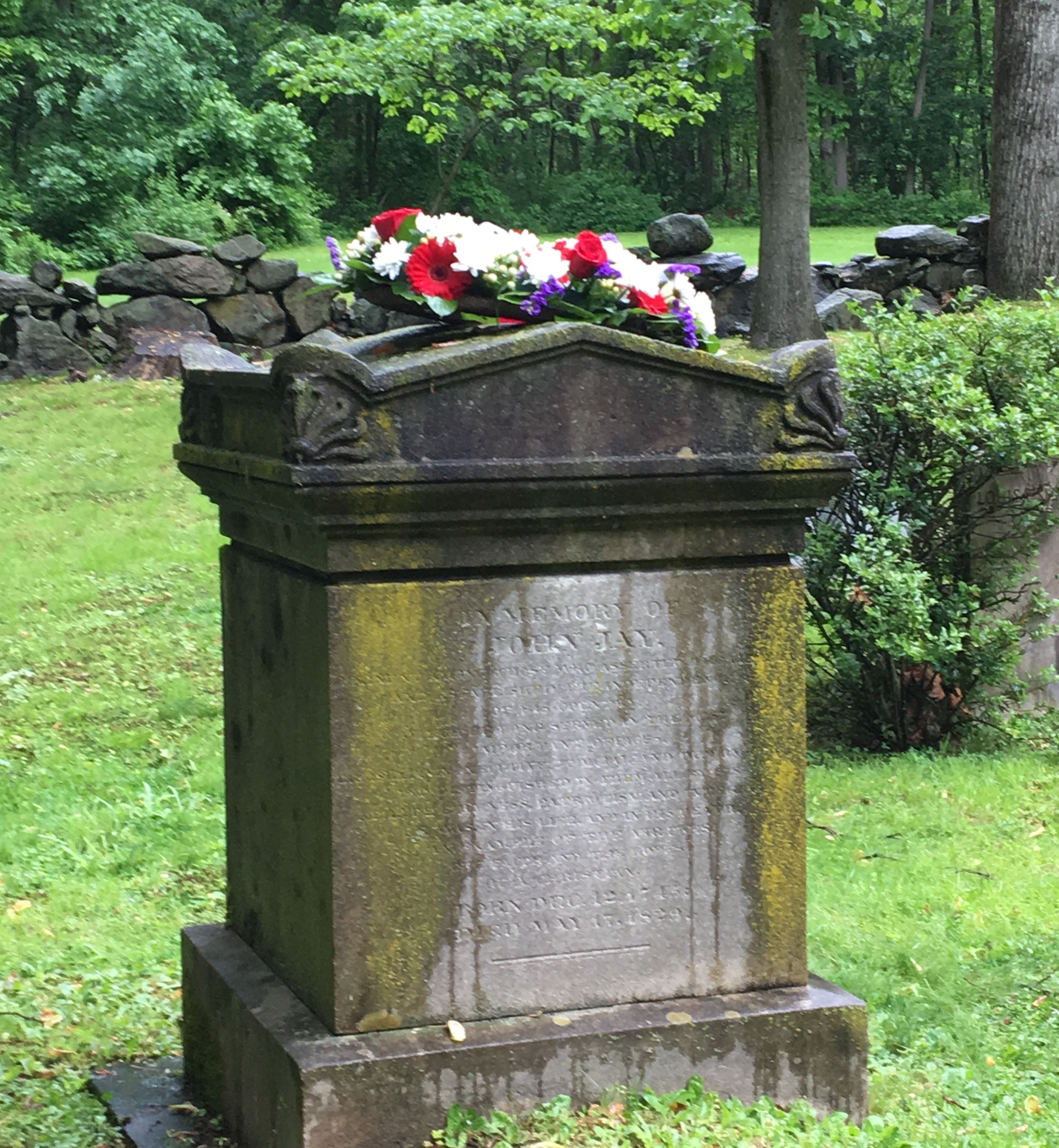 On Monday, May 29, 2017, members of the Jay Cemetery Association, the American Legion of Rye, Post 128,  and the Jay Heritage Center gathered with the public to honor Founding Father and peacemaker John Jay at the private cemetery he established in Rye in 1807 for himself and his family. Jay’s parents, siblings and beloved wife Sarah Livingston Jay – and his descendants and their spouses are interred there. It is the oldest active cemetery in the nation associated with a pre-eminent figure of the Revolutionary War.

It is a tranquil place that is regularly closed to the public out of respect for the privacy of the Jay family although it has been opened on very special occasions including Memorial Day in years past and for certain scholars and dignitaries. But  this past Memorial Day 2017, visitors were invited to remember and honor John Jay and the many family members who served their country. Theo Budnik, President of the Jay Cemetery Association laid a wreath on Jay’s monument following a brief program and comments. Members of the legion then marked the graves of a dozen veterans with flags. Guests were welcomed back to the Jay Mansion for tours, refreshments; everyone was invited to look at original Jay family war memorabilia.
———————————————————-

Partial List of Those who Served Buried at Jay Cemetery, Rye, NY

Col. Cornelius Jay DuBois (1836 – 1880) Du Bois was critically wounded at Gettysburg and remarkably rescued on the battlefield by his brother, Dr. Henry Augustus DuBois (1840 – 1897) an Assistant Surgeon. Cornelius recovered to fight again at Resaca, Georgia and plant the Union colors on the enemy’s summit. (His brother Dr. DuBois is not buried in the Jay Cemetery)

Peter Augustus Jay (1841- 1875) Jay raised a local militia for the Union in Rye during the Civil War and became its Captain. Jay went with his company to Harrisburg, Fort Marshall near Baltimore and Fort Richmond, Staten Island. Later he and his men had the honor of attending Lincoln’s inaugural in 1865. Major Delancey Kane Jay (1881 -1941) Kane was awarded the Distinguished Service Cross for extraordinary heroism in action while serving with 307th Infantry Regiment, 77th Division, A.E.F., at Chateau du Diable, near Fismes, France, 27 August 1918. With utter disregard of his own safety, Major Jay directed the attack of his battalion, even after he had been wounded and refused to be evacuated until all wounded enlisted men had been evacuated. A 1917 WWI Plattsburgh recruitment poster belonging to Delancey Kane Jay was donated by Dawn and Peter Doane.

Captain Arthur Mason DuBois (1890 – 1979) Capt. Du Bois led a team of 28 men at the key port of Saint Nazaire on the Loire in WWI where they helped receive troops and direct supplies for the Army Air Force, moving them to base depots. He served as treasurer for the Saint Nazaire Memorial Fund which erected a monument at the site. Dr John Jay DuBois and his wife Sharon have donated Capt. DuBois’ WWI uniform to the JHC Collection.

John Jay “Jack” Ide (1892 – 1962) Ide rose to Lieutenant in the Naval Reserve Flying Corps during WWI and was recalled to active duty in 1940 as Lt. Commander heading the Foreign Branch of the Bureau of Aeronautics as a Tactical Air Intelligence officer in Europe. His secret work collecting information about the military advancements of other European powers, including the threat of Hitler’s laboratories under Hermann Goering and his Ministry of Aviation helped spur the United States to invest more time and funding in its own defense industries. A portrait of Jack Ide together with numerous photographs and archives of his military investigations was donated by Alexander Bruen Trevor and his family and are part of the JHC Archives.

Lieutenant Frances Jay (1904 – 1980) Frances was one of the first WAVES in World War II signing up in August 1942. In 1944, she  became the first representative of the Navy to sponsor one of the Kaiser designed Liberty Ships in Panama City, Florida, named for her great aunt, social reformer Josephine Shaw Lowell. Frances, a graduate of Bryn Mawr, was stationed at Anacostia Airfield in DC. Peter Jay (1913 – 2000) served in the US Army during WWII. He was a Lieutenant and served in the 6th Field Artillery in the Pacific theater (Solomon Islands), where he was awarded a Bronze Star, and subsequently stationed in Italy. He left the service with a rank of Major.

John Clarkson Jay IV (1915 – 2000) Jay served as a photographer and public relations officer with the 87th Mountain Infantry Battalion at Fort Lewis, Washington and later the 10th Mountain Division where he made training and recruiting films and evaluated equipment for winter warfare. Later he served as Commanding Officer of the 10th Reconnaissance Troop.

Rear Admiral George Elmore Ide (1845 – 1917) (Husband of Alexandra Jay Bruen) As a midshipman, he cruised after the Confederate steamers Tallahassee and Florida and went to Greenland on USS Juniata in 1870, in search of Polaris survivors. He commanded the USS Justin off Santiago, during the Spanish-American War, and the USS New Orleans on Manila Station. He served as Captain of Navy Yard, Mare Island, CA, until 1901.

Harry Bowly Hollins (1909 -1991) (Husband of Elizabeth Morgan Jay) Hollins was a Lieutenant Commander in the US Navy and an Air Combat Intelligence Officer during WWII.

Huston Huffman (1913 -1980) (Husband of Augusta Jay)
As a Lieutenant Commander on the USS Finnegan, a destroyer escort stationed off Iwo Jima, Huffman spotted and sunk a Japanese I-370 submarine tasked with attacking the American fleet. He was awarded the United States Legion of Merit and the Bronze Star and retired with the rank of Commander.
———————————————————–
The words of Associate Justice Harry Blackmun held great resonance even 30 years later:

“I was impressed with the house, with the lawn, with the great trees, some of which are now gone, and with the vista down to Long Island Sound. It was a place that struck me then as symbolic of what was impressive about certain aspects of the latter part of the eighteenth century – gracious living and status, to be sure, but coupled with a sense of responsibility, particularly to government and to the art of getting along together.

It must be a matter of great pride to be members of an old and distinguished family that contributed so much to early America, that believes in education and leadership then and now, that has sensed the merits, almost the sacredness, of family ties and of what is expected of its members in each generation. I am certain that all of us who are here today join in saluting the Jay family for its significant contributions that meant so much when this Nation that we all love was in its precarious infancy.

I was deeply impressed with what was written on the stone marking the grave of the first Chief Justice. Let me repeat the epitaph slowly:

In memory of John Jay
Eminent among those who asserted the liberty and established
the independence of his country which he long served in
the most important offices, legislative, executive, judicial, and
diplomatic, and distinguished in them all by his ability, firmness,
patriotism and integrity…

That epitaph was written by his son, Peter Augustus Jay. It says much in few words. John Jay served in every branch of government and was distinguished in them all.

— Harry A. Blackmun, Associate Justice of the Supreme Court, Remarks Given in Rye, October 1987