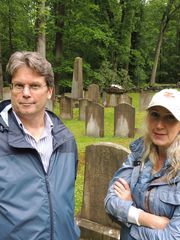 A soggy Memorial Day with parades, memories and rain

Memorial Day also marked the first time in more than a generation that the family cemetery at the John Jay Heritage Center in Rye was open to the public.

Peter Doane, a descendant of Chief Justice John Jay, and Suzanne Clary, president of the Jay Heritage Center, talk in the Jay family cemetery, on May 29, 2017, the first time in a generation that the public could visit the resting place of the nation’s first chief justice.

The cemetery, the resting place of the nation’s first chief justice, is still an active burial ground for the Jays and their heirs.

On Monday, one of them, Peter Doane, the newly named president of the Jay Cemetery Trust, was on hand to greet the 60 or so visitors who braved off-and-on showers to walk among the headstones of Jays and Munros and Wurtses. The site was opened on Memorial Day in response to queries from historians and the public.

“We decided that a single day having it open to the public was something we could manage,” said Doane, who pointed out where his final resting place will be, in a new section of the cemetery a stone’s throw from his famous forebear.

The John Jay headstone, a tall, square marker topped with a patriotic wreath, is difficult to decipher, its inscription partially obscured by time and a green moss-like coloring.

But visitors were treated to a fascinating bit of local history: Suzanne Clary, president of the Jay Heritage Center, said that the headstone bears three pock marks that are actually bullet holes. Read more here