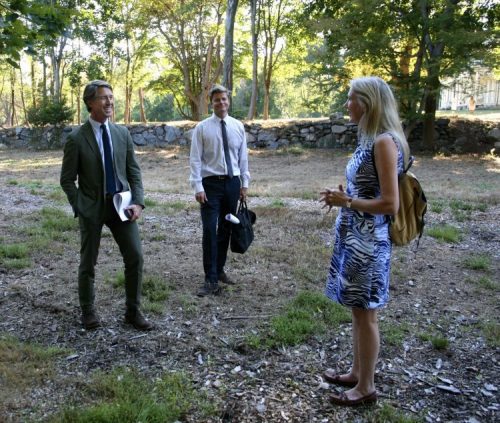 by Caitlin Brown for The Rye Record

This year, the Jay Heritage Center proudly celebrates its 25th anniversary. The deed to preserve and protect the integrity of its namesake property, The Jay Estate, the boyhood home of Founding Father John Jay, was signed on August 20, 1992.Thanks to the hard work of staff and volunteers, the generosity of many donors, Federal funds from Hurricane Sandy, thoughtful collaboration with partners (New York State Parks and Westchester County Parks own most of the property), and several prestigious grants, the Jay Heritage Center (JHC) is undergoing a renaissance, committing itself to bringing back the property’s landscape to its full splendor. While the Center only owns 1.5 acres of the 23-acre property — including the 1838 Greek Revival Mansion, Carriage House (the Visitors Center), and their associated footprints of land — they were unanimously awarded stewardship of the surrounding 21.5 acres by New York State and County officials in 2013. At that time, the Center was entrusted with the decision-making, as well as sole responsibility for fundraising so as to create a cohesive garden and educational experience for the community to enjoy, with an important nod to the land’s extensive ecological and cultural history that goes back thousands of years. JHC receives no annual tax dollars from Rye, the County or State, and yet operates the park for the benefit of the public.

A lot of thought has gone into this endeavor. It required thinking about the lives and practices of many people knitted in the landscape, back to the Native American tribes who lived there before the Jays, as well as members of the Budd family, one of the founding families of Rye), and the generations who lived there after. It involved looking at what was, what is, and why? “We are working with a historical landscape,” says Suzanne Clary, JHC President. “There is a real concern for integrity with a place like this. There’s a reason the gardens were there for generations; the sun, soil, drainage, and site selection mattered. These are all hugely important considerations when it comes to making a property sustainable, and this is what we are aiming to continue.”

The process began with a focus on how to preserve the cultural landscape and establish best practices. “Our first step was to work with our neighbors and stakeholders — the State of New York, Marshlands Conservancy, and Westchester County Parks — to commission a Cultural Landscape Report by Patricia O’Donnell of the award-winning firm Heritage Landscapes in Charlotte, Vermont. “This was crucial in helping us break down what we had and what we wanted to restore,” says Clary. The report, completed in 2001, got the ball rolling.

The process was a long and arduous one — raising funds, getting permissions from state and local governments, and considering a holistic approach to interpret but not exactly replicate all the landscape features represented in ample photos and maps. In December 2014, JHC was thrilled to receive a matching grant for $500,000 from New York State Parks to restore the gardens.

Acclaimed architects Thomas Woltz (Nelson Byrd Woltz Landscape Design) and Larry Weaner (Larry Weaner Landscape Associates) started meeting with Clary and gave public presentations about possible restoration strategies in 2011 and 2013. With the grant finally in place in 2016, they were formally retained in and could begin planning and implementation — Woltz, “to rehabilitate” the formal gardens, and Weaner, to re-imagine the Meadows.

“We are over the moon to be working with not one but two acclaimed and universally respected experts in the design profession,” says Clary. “They understand the science that inextricably links successful landscapes to healthy wildlife habitats. Rather than impose some preconceived order on our campus, they respect that it has a unique manmade and natural history. Plus, they are designing for everyone who will use this park, from human pedestrians to winged pollinators!”

It is an ideal collaboration in that the principals share a passion and a skill for melding a site’s history with its ecology, a crucial factor when it comes to the Jay undertaking. The property, which slopes down to the adjacent Marshlands Conservancy, a separate County Park, hosts wildlife and plant life left largely untouched. All involved in planning aimed to create a landscape that honored and embraced this.

Woltz says, “It was an ideal property in its resonance with our firm’s mission: ‘a balance between ecology and culture.’ You see this primitive artifact of the house, that everyone knows, but the landscape comes with a layered history, telling a complex narrative of the site.” He adds, “I’m excited for people to come and see this as an index of regional landscape and begin conversations about ecology and landscape typologies from Native Americans through Jay and on through the 21st century.”

Equally passionate about the project in its balance of native landscape, cultural and ecological history is Weaner, who sees the meadow as a metaphor for the layers of all these elements working to create an ever-changing script. “Meadows are an ongoing story,” he says. “Some seeds don’t spring up for five to seven years. Meadows are ever-evolving landscapes… always changing.” So too are the people that inhabit the landscape, which is why the gardens will honor <all> who walked the property: Native Americans, enslaved servants, a Founding Father’s family (Jay was a vocal opponent of slavery), and all the generations to follow.

Woltz adds, “It was an intentional choice not to restore the Jay-era landscape as one single point in time, but rather to reveal the complexity of sites that change over time and with subsequent ownership.”

Weaner felt similarly compelled to show the intersection of history, ecology, and inhabitants in his plans for the meadow. “In our consideration, we went back beyond the Jay family era to when it was inhabited by Native Americans. There are nods to that in the land management and part of the interpretive material. Things they did influence what I do.”

First on the agenda for the meadow was to remove wide swaths of invasive species that were crowding out native populations — offenders like mugwort, wineberry, Norway maples — as they didn’t support wildlife.

“We needed to select things that work, not just ones people might think look nice,” says Weaner. “All plants were chosen according to their historic and ecological criteria. The historical and ecological elements are huge here being out on Long Island Sound. They are equal partners.”

Two acres will be seeded starting this month with wildflowers and native grasses, designed to attract birds and pollinators. Native shrubs like Virginia rose have also been selected for their berries that birds feed on. The meadow will integrate with its neighboring garden “rooms” via a path that will be marked with engraved stones commemorating the inhabitants of the property — owners and workers alike.

The Garden rooms Woltz has set to renew will be framed within original dry-laid, two-layered stone ha-ha walls that date back as far as 1822. The patterns of the three garden rooms — each named in honor of original inhabitants — flow from highest intensity of design and management to less so as one moves from the first room to the second and third. “We want to show people they can learn horticultural practices here and apply them in their yards at home. We hope fellow park stewards and other non-profits might do the same,” says Clary.

The first, and most formal outdoor room, “Mary’s Garden”, will contain partèrre hedges and 16 working vegetable beds. This room honors the Jay family and all the people that lived with and worked for them. “The first room was the most informed,” says Woltz. “We had less information the further we got away from the house.”

The second walled room, “Grace’s Garden”, will honor the Van Norden and Talcott families who lived in the house after the Jays. Grace Talcott Van Norden and her family traveled to China for missionary work with the Presbyterian Church so the mature cutleaf maple is a small nod to her. An old swimming pool will be rehabilitated into a reflecting pond. This room will be an oasis for quiet contemplation and occasional classical music concerts.

The third room, containing a 100-foot-long arbor trained with roses is known as “Zilph’s Garden” and honors the last private owners, the Palmer and Devereux families, longtime Princeton benefactors and locally associated with American Yacht Club. It will be a terraced garden (part of the terrace is thought to be original). Beds of native pollinator plants will be displayed like a palette of swatches to choose from, so that all can get a closer glimpse, and better understanding of the wonderful native plants also growing in the meadow.

What is also remarkable about this plan for the restoration of original site lines and circulating pathways is that two parcels of land are reunited, interpreted, and enjoyed together again. Visitors or schools can see two public parks in one visit – the Jay Estate and Marshlands Conservancy – and travel back in time from Boston Post Road all the way down to Milton Harbor just as people did hundreds of years ago when the land was all one property.

The Founding Fathers were great students of horticulture and education who tried to adopt European gardens to American soil. In many ways this project carries that vein — creating gardens in the image of another, but fitting them in their own place in time; teaching others, at the same time, how to embrace our delicate ecosystems, our heritage, what we once were and what we can become.

In 2013, before the restoration of the Jay Heritage Center landscape had begun, invasive species were choking out the native plants in the meadow. The re-opened meadow, is ready for seeding and planting of a mix of grasses and wildflowers. The plants have been carefully selected to attract grasslands birds and a variety of butterflies, insects, and local wildlife.