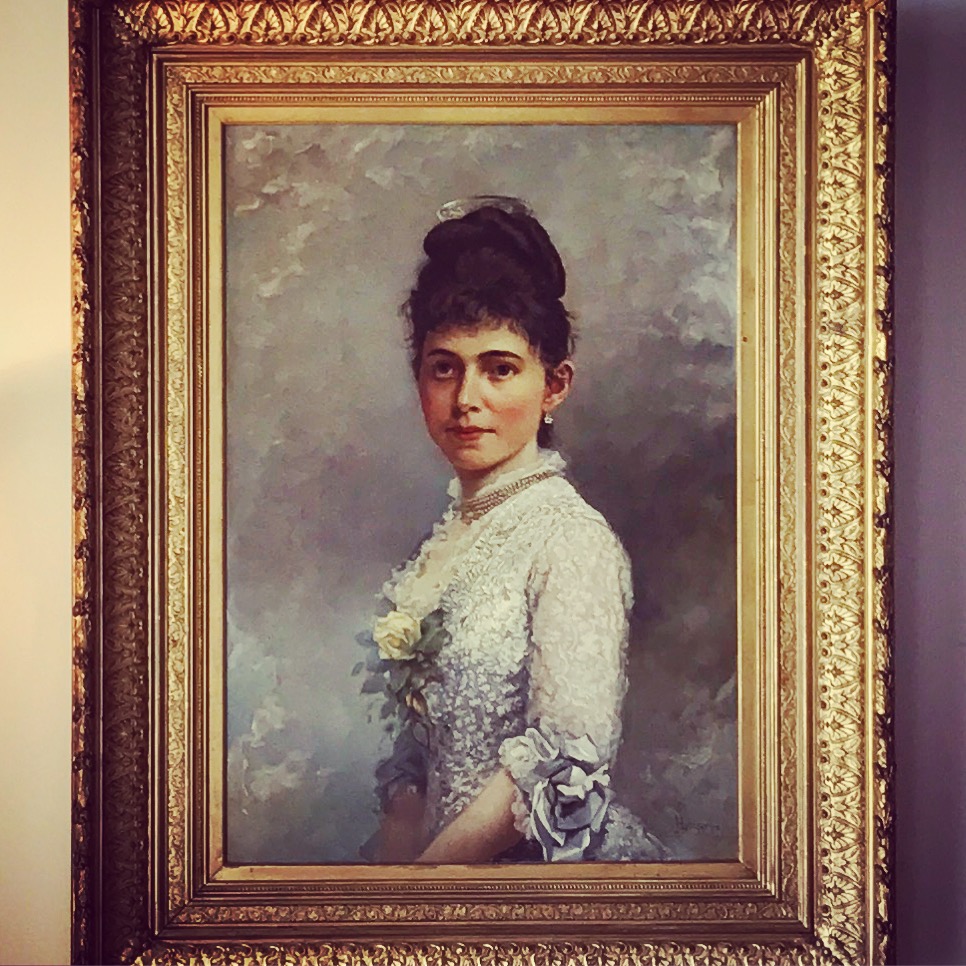 The Jay Heritage Center recognizes with immense gratitude the gift of a portrait of Alexandra Louise Jay Bruen (Mrs. George Elmore Ide) (1853 – 1938)  donated by Alexander Bruen Trevor and Family early this month. “Louisa” was one of four children born to Sarah Louisa Jay and her husband Alexander McWhorter Bruen, a surgeon. On her mother’s side, she was a great granddaughter of John Jay, and the granddaughter of New York abolitionist and Judge William Jay of Bedford. On her father’s side she traced her bloodline to Obadiah Bruen, one of the founders of New London, Connecticut and Newark, New Jersey.  Louisa spent summers in Scarsdale on property that her parents purchased from the family of James Fenimore Cooper – in fact, they built their house where the novelist’s farm, “Angevine” and a building known as “Cooper’s Folly,” had once stood. Historian John Scharf gives a small window into Louisa’s early life; he records how the Bruen family frequently opened their house during the Civil War, when other chapels were closed, hosting services, from masses to marriages for Presbyterian and Methodist congregants alike in the area.*

At the time this elegant portrait was painted, Louisa was 24 years old. Her hair is pinned high with a pearl colored Victorian comb and her pale grey day dress with sheer lace sleeves is adorned with a yellow rose. In 1889, she married naval Lieutenant George Elmore Ide who hailed from Ohio. The young couple’s only child, John Jay “Jack” Ide was born a year later in Narraganset, Rhode Island.  Louisa’s husband George built up an impressive and multifaceted military career. As a midshipman, he cruised after the Confederate steamers Tallahassee and Florida and went to Greenland on USS Juniata in 1870, in search of Polaris survivors. In 1878 he assisted in documenting the transit of Mercury from an observatory in Texas. During the Spanish-American War, he commanded the USS Justin off Santiago, and the USS New Orleans on Manila Station. He served as Captain of Navy Yard, Mare Island, CA, until 1901 and retired with the rank of Rear Admiral.

Like her mother and many Jay women, Louisa was strong, intelligent and vocal about her opinions. She advocated business education for women. In 1899 she authored an article for Appleton’s Popular Science Monthly called “Shall We Teach Our Daughters the Value of Money?” in which she asserted “a woman’s intellect is perfectly capable of coping with and understanding business affairs. In some matters she is far shrewder than the average man, and in many cases her quick insight sees at a glance that which man requires time to penetrate. Only give her half a chance.” George passed away in 1917. After his death, Louisa lived primarily in Paris but also maintained an apartment at the Plaza Hotel in New York.  She traveled frequently with her son and daughter-in-law Dora Donner Ide all over the world. Louisa and her family requested to be buried in the historic Jay Cemetery in Rye. George and Jack’s stones are each emblazoned with naval anchors reflecting their military service. They are close to the Jay family home where Louisa and Jack’s portraits now hang next to each other.

The artist of this painting,  Jacob Hart Lazarus (1822 – 1891) was one of a respected group of successful, Jewish artists working in New York City during the 19th century.  His father arranged for him to become a pupil of the portraitist Henry Inman; his talents eventually earned him an induction into the National Academy of Design in 1849, an institution that his mentor had helped found.  Lazarus’ precise brushstrokes (further influenced by the advent of photography and daguerreotypes) won him favor with a host of prominent New Yorker patrons. “He transferred to canvas the features of three generations of the Astor family” along with several Jay and Livingston descendants, Commodore Matthew Perry, Union General Henry W. Halleck, banker Joseph Drexel, August Belmont, Boston philanthropist John Amory Lowell and tycoon George Vanderbilt II. Lazarus also executed a small number of miniatures, landscapes and portraits of historic figures like Revolutionary War Gen. Philip John Schuyler (father of Eliza Hamilton).

In addition to his artistic credentials, his family’s position in Manhattan society was notable. His older brother Moses was a wealthy sugar merchant. Moses’ memberships at the Knickerbocker and Union Clubs may have helped open doors, and checkbooks, for his younger brother Jacob.

Lazarus completed likenesses of the Jewish leaders in his community, men like Jacques Judah Lyons, the minister of Shearith Israel, where he worshiped. This was fitting given that his ancestors on both sides had been members of New York’s earliest synagogue. In fact, his father Eleazar, Lyons’ predecessor, had written the first Hebrew-English book of prayer printed in New York.

Following Lazarus’ death, his widow and daughter made a generous bequest of $24,000 to the Metropolitan Museum of Art to establish a fund for young men to study mural painting abroad. But the gift created a quandary; at this time, the Met was moving away from conducting its own School of Art towards a focus on the study of the objects in its collection. Trustees reasoned that they “were under no obligation to teach elementary drawing and painting any more than the Trustees of the Astor Library were to teach reading and writing”. With a dearth of advanced candidates to compete for the Lazarus prize, the Met made arrangements with the great John La Farge* to train 20 students from the premier art schools in the country including the National Academy of Design and the Art Students League; this select group then competed for “the crown and culminating point of artistic education in this country.” Ultimately, in 1911, these students were given privileges with the Academy of Rome.

Today, the Lazarus fellowship still exists as part of the prestigious Jacob H. Lazarus-Metropolitan Museum of Art Prize for the Academy of Rome.

* Coincidentally, Jacob’s brother had lived at 18 West 10th Street, two doors away from La Farge and the 10th Street Studio Building where artists like William Merrit Chase and Albert Bierstadt painted. Lazarus own home was not much farther on 30 East 9th Street and his studio was located in the Dodworth’s, 212 Fifth Avenue, in Madison Square, a “famous resort for knights of the easel.” His niece, the poet Emma Lazarus, is far better known as the author of “The New Colossus” – lines from her poem grace the Statue of Liberty:

Give me your tired, your poor,