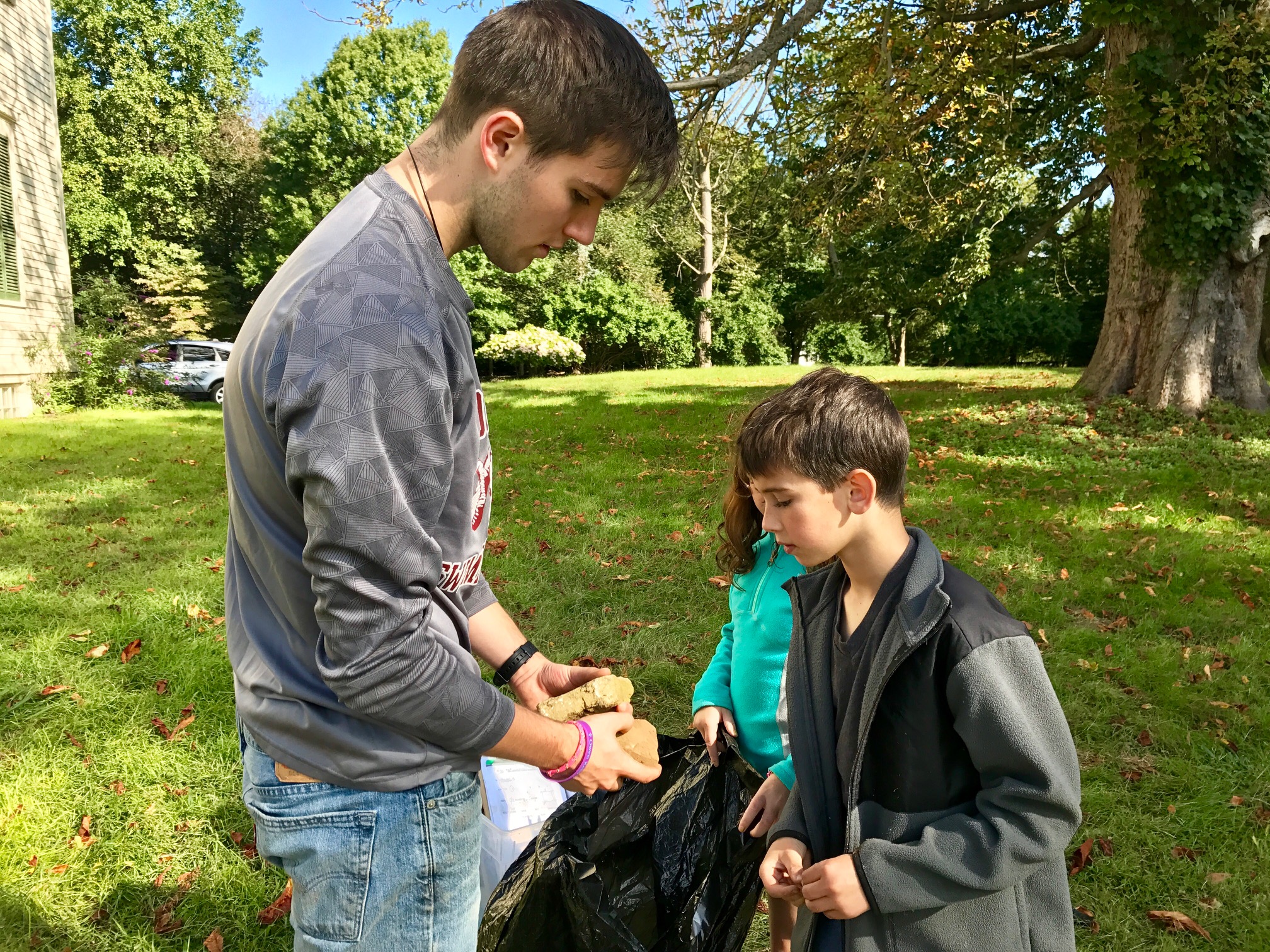 The Jay Heritage Center is excited to share news of a terrific discovery made by an Eagle Scout candidate with Rye’s Pack 2, Chris Parker. Chris, a senior at Fordham Prep, led a group of more than 11 volunteers in a methodical field excavation at the Jay Estate this summer. Dr. Eugene Boesch, who has undertaken archaeological investigations in the Hudson Valley and Manhattan for more than 30 years, supervised this ambitious project. Their objective? To search for supporting evidence of a small pre-existing structure of 18th century origin that appears in two separate archival drawings in the Jay Heritage Center Collection. The results are all the more remarkable given the location of their shovel tests – the National Historic Landmark  home of patriot,  peacemaker and Founding Father John Jay on the Boston Post Road. Jay is known for many contributions to the founding of America and its government. As the primary architect of New York State’s Constitution in 1777, Jay introduced language and principles that together with ideas from the Constitution of Massachusetts formed the basis of the US Constitution. Jay grew up in Rye and his home was a touchstone throughout his early career.

Over the course of three weeks of careful investigation Chris and his team of men and women from different area schools and troops, successfully unearthed numerous artifacts from both the late 1600s and 1700s. What they found – including pieces of period slipware, redware, refined earthenware, china, bottle and window glass fragments, bone, shell, clay pipe stems and stamped bowls, glazed bricks, and cut nails – gave clues to the daily habits of another era. The most intriguing discovery was what appears to be a collapsed brick chimney with metal straps: its configuration suggests a modest colonial era outbuilding associated with “The Locusts,” the Jay family’s ancestral home in Rye.  Dr. Boesch believes the structure may have served as a work house for the farm or possibly a small servant dwelling.  John Jay’s father Peter purchased the land and pre-existing buildings from John Budd in March 1745. John Budd’s great grandfather, one of Rye’s first founders, first acquired and developed the land in 1661 when it was called Apawamis.

Dutch yellow bricks, long buried and preserved in the dirt like the ones found here, are typical of pre-Revolutionary War sites and help establish a timeline. This initial probe and the cultural objects uncovered will help the Jay Heritage Center better recreate the daily life of Rye’s earliest settlers, particularly the Budd and Jay families, as well as their servants, enslaved and free. The Jay Heritage Center will display some of the artifacts and show visitors the dig site at JHC’s upcoming fall festival, Jay Day on Sunday, September 24th from 11am – 3pm. The Jay Heritage Center is grateful to Chris, his friends and Dr. Boesch for their dedication and perseverance in this endeavor. Volunteers included Abigail Repetto, Kristina Marchand, Adele Harshbarger and Melissa Bergin from Rye Troop 2282; Jonathan De Toro from Mamaroneck Troop 2 along with his father Jeff and sister Natalie; Fordham Prep students, Christian Gjelaj, Aiden Foley, Luis Mendoza, Andrew Wetty and Jonah Shortall.

Ongoing archaeology, conducted according to the standards of the US Department of the Interior and State Historic Preservation Office standards is a hallmark of the Jay Heritage Center. Findings like these expand the interpretation of the site and add to the narrative of all the men and women who lived and worked there. Learn more at www.jayheritagecenter.org