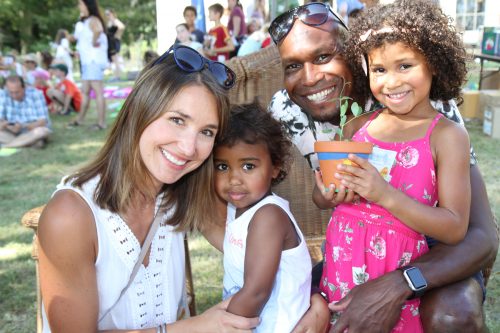 The roster of performers was headlined by bestselling children’s author Robert Sabuda. Robert, whose intricate and wonder filled books have topped the NYT chart, guided many small hands with paper and scissors to fashion their own pop-up creations – he quickly empowered his young audience to master the art of paper engineering! Robert was joined by New York Botanical Gardens educator Anne Mottola whose series of books, Wonders of the Garden, illustrated by her sister Mia, introduced her audience to the colorfully hued vegetables, animals and vivid sensations of the garden.

Pied Piper Ponies provided rides for young jockeys and a petting zoo while JHC Staff and volunteers gave guided tours of the Jay Mansion and explained why John Jay was 1 of THE 7 Founding Fathers. Everyone also found out about Caesar Valentine, an enslaved and emancipated servant of the Jay family and heard about newly uncovered research that shows he had a son who also lived at the Jay Estate. Ashwood Restoration’s Bruce MacDonald showed visitors a timber from the 1745 Jay Family farmhouse that James Fenimore Cooper named “The Locusts,” – the very same place where citizens of Rye celebrated the end of the American Revolutionary War.

One of the most popular attractions was an ongoing archaeology test pit curated by Eugene Boesch and Eagle Scout candidate Chris Parker. Families shared a rare window into the past – what appears to be a servant’s dwelling from the late 1600s or early 1700s possibly built by a worker or enslaved person retained by the Budd family, founders of Rye. Hard working volunteers and helpers had impact. The effort was cheerfully led by Jay Day Chair, Tracy Edwards, and her Committee: Betsy White, Caroline Wallach, Alison Heaton, Liz Garrett, Emma Hanratty. For the 4th consecutive year, volunteers from Con Edison pitched in as well giving added power to the celebration! Photos by Cutty McGill, Taryn Clary and Anja Porto.