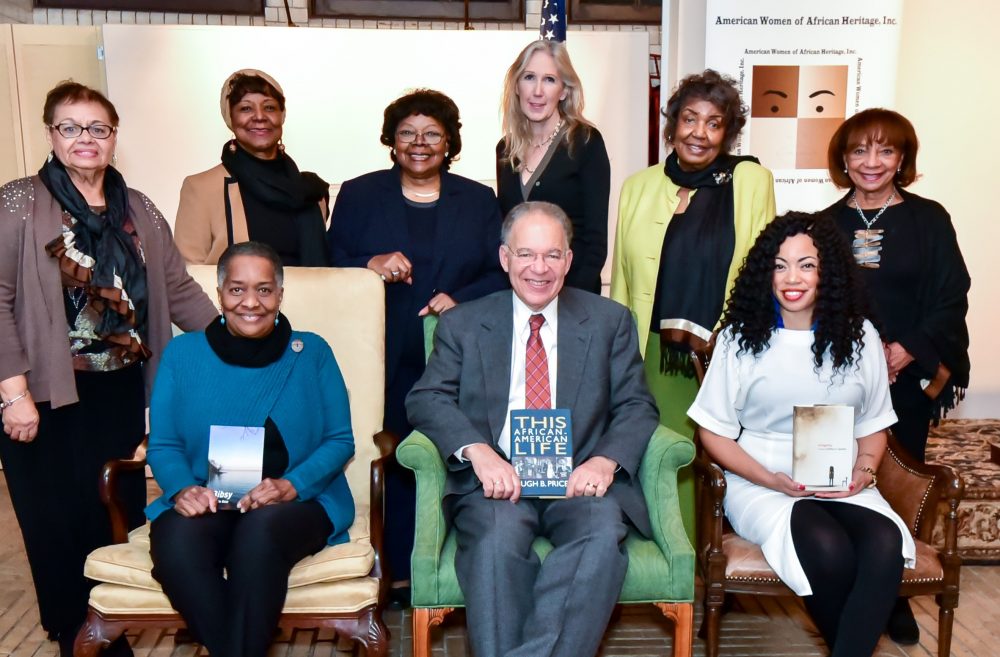 On January 15th, the Jay Heritage Center commemorated the legacy of Martin Luther King Jr. with their partners, the American Women of African Heritage (AWAH) and 3 superb authors offering an afternoon of literature. It was the 4th consecutive collaboration between the two non-profits. Over 175 guests attended a superbly rich program with readings from “Bibsy,” by Brenda Ross, “Allegedly” by Tiffany D. Jackson and “This African American Life” by Hugh B. Price.  The event was chaired by AWAH Board members Thelma Gordon and Francine T. Shorts. Among those in attendance was the extraordinary Dr. Olivia J. Hooker, a longtime supporter of AWAH and JHC and their shared mission to promote the study of African American History among young people, particularly women.

Ross spoke first, reading from her historical novel, set against the backdrop of the suburbanization of Rockland County in the 1950’s; the Hudson River flows familiarly through her narrative. Jackson’s novel paints a vivid picture of a young girl’s grim treatment when she is accused of murdering a white baby; the pages Jackson read illuminated the shocking prejudices and hurdles that face young people snared in the criminal justice system . Lastly, Hugh Price shared his family’s fascinating discoveries of their ancestry along with his experiences working with others and becoming a leader in the business community; he talked about the world’s needs for many diverse types of advocates from catalytic leaders, to idea leaders, organizational leaders, political leaders to grassroots leaders – all are needed to effect change. “We must never assume that progress is etched in concrete or irreversible and the hard work of reaffirming, fortifying  and protecting the American dream is the overriding, unending obligation of citizens of a free society.”

Price noted his admiration for Jay descendant John Jay Iselin with whom he worked at WNET – in the 1980’s, Iselin was one of the forces behind preserving the Jay Estate in Rye.

Highlights of the afternoon were two powerful solos by Lori Dixon-Stephens.

As part of the program, Francine Shorts, AWAH President and Barbara Edwards, Chair of Westchester County’s African American Trailblazers Advisory Board graciously invited JHC to share their newest discoveries about one of the families who lived at the Jay Estate when it was a 400 acre farm. AWAH has encouraged JHC’s efforts to expand school visits to Rye so that students can learn more about the Jay Estate and its inhabitants both free and enslaved.

JHC’s efforts have focused on an enslaved man named Caesar who spent most of his life in Rye with the Jay family, first grooming horses in 1787 as a young boy before finding himself transported across the ocean to today’s Haiti in 1800 where he served as a drummer for Toussaint Louverture. Caesar returned to Rye after the revolution and after John Jay’s enactment of the Gradual Emancipation Act. Sadly he was still considered property by John Jay’s blind brother Peter and his wife Mary. He was not freed until after their deaths. Upon his manumission in 1824, letters reveal he stayed on to work for John Jay’s son, Peter Augustus Jay, as a free man and trusted member of the household. He worked as a butler and assumed the surname Valentine.

For many years, JHC knew of Caesar’s existence and had small insights into his life. He was the model for a character in James Fenimore Cooper’s first successful novel “The Spy.” In this tale of Revolutionary War intrigue, Caesar comments about slavery and its diminishment of men like himself. But until last year, nothing was known about his family, his parents and whether he ever had a wife or children. Suzanne Clary, President of the Jay Heritage Center explained, “We have been searching for over a decade because this land was their home too and every path bears their imprint. Thanks to Jay family letters we have transcribed with the help of volunteers, we now know with certainty that Caesar walked the trails down to Milton Harbor and the views you see from the veranda were his as well. New contributions to our research from a possible relative, Carol Ubosi, including a bible inscription, show he was indeed married and was a father. He and his wife had at least one child, a son also named Caesar Valentine who was born in 1807.”

Caesar Sr. died October 2, 1847 and was buried somewhere on the Jay farm two days later according to records at Christ’s Church. The cemetery is likely located somewhere near or within today’s Marshlands Conservancy but there are no headstones. According to one poignant letter “We went to the old burying ground…There were several graves with no recording stones so that even their names have perished & they are twice dead.” JHC is determined to not let their names perish. The narrative of this family, an African American father, a son and a mother, spans two homes on the one site which was landmarked 25 years ago by the National Park Service. The quest to find out more about both Caesars, and both parents, their ancestors as well as their descendants will continue. The gardens and meadow JHC is planning will bear memorial stones with their names. Preservation of the 23-acre Jay Estate and the adjacent Marshlands park will further protect their stories and undisturbed resting place.

Clary added, “Gatherings and collaborations like AWAH’s MLK Jr. Literary Celebration inspire and help encourage our work, our staff and volunteers. We applaud non-profits like AWAH and writers like our honored guests whose words help capture the essence of African American lives for all readers and future generations of students of history.”