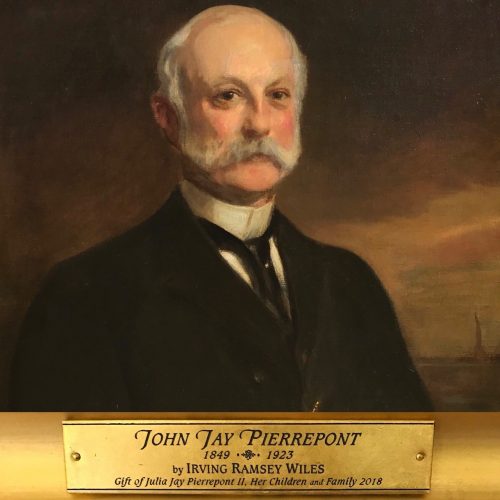 The Jay Heritage Center is delighted to announce the donation of a painting of John Jay “Jay” Pierrepont (1849 – 1923) executed by the notable artist Irving Ramsay Wiles. Wiles was a student of William Merritt Chase and Carolus-Duran. His clients ranged from President Theodore Roosevelt to arts patron Adolph Lewisohn. The painting was recently conserved by Lowy Antique Frames & Fine Art Restoration and is now on display at the Jay Mansion. The painting was donated by Julia Jay Pierrepont II, her children and family.

The subject was the second son of Anna Maria Jay and Henry Evelyn Pierrepont. Born September 3, 1849 in Rye, Jay was named after his maternal great-grandfather, a chief negotiator of the Treaty of Paris and an American founding father. On his paternal side, he was descended from a founder of another kind, James Pierpont, one of the creators of Yale College.

Though his mother’s family was long associated with Rye (his grandparents Peter Augustus Jay and Mary Rutherfurd Clarkson commissioned the 1838 mansion where he was born), Jay’s father’s family dedicated themselves to the robust development of Brooklyn Heights. His grandfather Hezekiah Beers Pierrepont purchased choice real estate along the East River during the early 19th century. He also invested in Robert Fulton’s steamboat, an innovation which streamlined transportation to the once agrarian village thereby accelerating its development. Hezekiah’s son, and Jay’s father, Henry, further improved the “ferry suburb.” Using European planning models, he introduced a city design that included open space for eleven public parks. In addition to these municipal keystones, Henry founded historic institutions like Green-Wood Cemetery, Brooklyn’s Academy of Music and the American Geographical and Statistical Society (the first national geographical society in the United States).

After the Civil War, John Jay Pierrepont was poised to manage one of the family’s many ventures that revolved around Brooklyn’s burgeoning maritime industry. The lucrative enterprise of Pierrepont Stores had been started by his father and uncle in 1857. Waterfront warehouse space appealed to merchants waiting to pay duties on their commodities of sugar, molasses and cotton coming or going to Europe and other foreign ports through the Customs House in lower Manhattan. By twenty, Jay had already apprenticed several years as a clerk under another principal named Ferdinand Massa before assuming control of the business in 1871 with his brother Harry (Henry, Jr.). The new partnership was re-named Pierrepont Bros. and Co.

In marble papered diaries, Jay recorded a tally of “wharfage bills” issued for ships and first-hand impressions of the rapidly changing harbor. Daily entries also memorialized images of Greenpoint, an active shipbuilding mecca and home to rope manufacturing. He describes seeing some of the most famous brigs and schooners of the period berthed there including Enchantress, Dauntless, Wanderer and his cousin’s yacht Palmer. Alongside these business records, there are glimpses of his private life – social gatherings, travels to Europe, friendships with Jay cousins and personal observations about books, operas and cultural events of the period.

In 1876, Jay married Elise de Rham, the granddaughter of Henry Casmir de Rham of Switzerland, an importer of “French Goods.” But tragedy entered their life with the death of their only son John Jay in 1878. Elise died soon after of pneumonia and Jay never remarried. He retired early from business in 1888, coinciding with the death of his father. His new calling became philanthropy as Treasurer of the Long Island Historical Society (today’s Brooklyn Historical Society) and as a vestryman of Grace Episcopal Church, the family’s long established place of worship. He lived out the remainder of his life as a widower in the mansion he shared with his parents and unmarried sisters Julia and Anna.

Known as No. 1 Pierrepont, the family’s home sat on an embankment bounded by Montague, Hicks and Pierrepont Streets. It was an Italianate brownstone designed by the architect Richard Upjohn.[1] From its rooftop, Jay had unparalleled views of the sky above – he became fascinated with astronomy – and the teeming docks below, not to mention a good view of Lady Liberty who can be seen in the background of this 1912 painting rising out of the New York harbor (her copper penny brown hue reminds us that the statue took 30 years to get the green patina we know today). These vistas also fueled Jay’s fascination with photography. As an amateur shutterbug, Pierrepont developed hundreds of black and white frames of the morphing skyline of lower Manhattan, creating “a living, brick-by-brick record” as modern skyscrapers gradually eclipsed the ancient views of colonial church spires and ships’ masts. A great-nephew, Abbott Low Moffat continued this project. Their combined series of time-lapse panoramas taken at roughly ten-year intervals from 1880 to 1944 were published in Life Magazine just before the mansion was razed by New York City to make room for a Robert Moses park and the Brooklyn Queens Expressway.

Jay’s leisure pursuits included membership in The Rembrandt Club (an arts group), genealogy, horseback riding in the Adirondacks and sailing. As a member of New York Yacht Club, he spent time on his single-masted boat named “Alert,” often cruising up to Northeast Harbor, Maine. In fact it was on a trip back from Maine that Jay succumbed to heart failure at the age of 75.

Though he was the last male representative of his generation, the Pierrepont name was carried on by three of Jay’s nephews and a great-nephew Commander John Jay Pierrepont 2nd. One of Commander Pierrepont’s three daughters, Julia Jay Pierrepont Stromsted, together with her children, has graciously donated this 1912 portrait. This gift complements a stunning cache of paintings photos, diaries, genealogical manuscripts, American antiques and decorative arts previously donated by another daughter, Bennett Pierrepont Jack and her daughters and grandchildren. Several of the items now on display at the Jay Heritage Center are from the original Pierrepont Mansion including the Chinese teak and marble screen inherited through the family’s association with the Lows of Brooklyn, another dynasty of merchants and civic servants.

Together these pieces form “The Pierrepont Family Collection” and honor the family’s commitment to the preservation of American history at the Jay Heritage Center in Rye.

[1] Upjohn was also the architect of Trinity Church on Wall Street, Grace Church in Brooklyn, the Pierrepont Memorial at Green-Wood Cemetery and Rye Presbyterian Church.