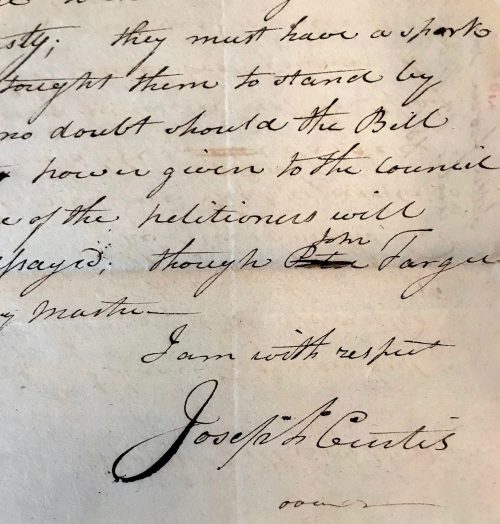 The Jay Heritage Center has an archive of original Jay family letters which are slowly and carefully being digitized and transcribed by staff and volunteers. This journey back in time is exciting for us and the men and women who help bring the narratives of lesser known events and individuals to life. In this blog by JHC volunteer Jeff DeToro**, three letters tell a story about anti-slavery advocacy that was documented by early American novelist Catharine Maria Sedgwick and how one man’s service was further memorialized.

In our archives are three letters written to Peter Augustus Jay by Joseph Reuben Curtis. But who was he and why were these letters saved? What can they tell us today?

Curtis was born in Danbury, CT on September 19, 1782.  He became a member of the New York Manumission Society in 1812 and was active in this organization while Peter Augustus Jay was its president in 1816.  So fervent was his belief in manumission that, according to a biography written by early American novelist Catherine Maria Sedwick in 1858, “There were some hundreds of cases of trial occurring every year between slaves claiming and masters denying their right to freedom, and nearly every one of these was looked after and the slaves’ rights vindicated by Joseph Curtis.” [1] Clearly, Peter Augustus Jay would have been greatly impressed by the words and deeds of such a man. Three of the notes by Curtis were sent during Jay’s one-year term, July 1, 1815 to June 30, 1816, as a New York State Assembly Representative in Albany.  Curtis spent “three winters in Albany as an outside attendant on the sittings of the Legislature there” promoting causes close to him, including the total abolition of slavery in New York State.[2]

In the first and third letters, dated March 2 and March 13, 1816, respectively, Curtis references a particular bill up for consideration to establish an assay office in New York City to help the city’s silversmiths in their profession (although later in life Curtis worked for a jeweler and his son became wealthy as an assayer during the California Gold Rush, it is unclear how his relationship with the silversmiths began).  Of special interest, however, are his impassioned statements to Jay in the letter in support of federalism and representative government for all citizens, not just the privileged.  He writes,

“You will permit me to say (that which you doubtless have heard from those whoes [sic] judgments are worth respecting) the observing citizen (in which class I must beg to be put) who looks, reads, and thinks on politics with no further interest than the peace and happiness of society; have felt more than a usual interest resulting from the proceedings of your house in the early part of session.”  He continues, “So far as our judgments go we do not recollect a time when Federal principles stood on better grounds in this state than the present.  If you should be so happy as to maintain through the session the high and true Federal ground we certainly may hope and strongly to the ensuing election will show that the men who are to make laws for the life, liberty, and property for so many peaceful citizens have the name of honest, moral, Christian men and vote not in the face of simple honesty to serve a few office holders.”

A pending bill on slavery is mentioned in Curtis’s second letter of March 9, 1816.

“The Slave Bill we have every assurance is in the hands of those that can not be advised by its friends here.”

The bill in question appears to be one that narrowly passed the Assembly (by a vote of 51 to 48) on March 18, which stipulated that “all complaints by any servant born of a slave, and made free by virtue of this act, arising under this act, against his or her master or mistress; and all complaints by any such master or mistress, against such servant, shall be heard, tried and determined, in like manner, and with the like effect, as complaints by and against masters and apprentices, under the laws of this state.”[3]

Curtis’ efforts in Albany eventually help lead to the passage of a law the following year (1817) that freed all slaves in bondage prior to July 4, 1799 by 1827. This act built upon the Act for the Gradual Abolition of Slavery that had passed in 1799 during John Jay’s tenure as Governor of New York. According to Sedgwick, Curtis recalled one particularly cold and bleak walk to the Capitol on February 17, 1817 to advocate passage for the Manumission Act “as one of the proudest days of his life.”

Joseph Curtis was never a member of the established moneyed class, yet he devoted his modest means and boundless energies towards the betterment of those less fortunate than him for the majority of his life.  At the conclusion of the second letter, Curtis enquires about the status of his guardianship of “a colored girl named Mary” from another legislator, Isaac Ogden (“not having heard from Mr. Ogden; I wish you to be so good as to ask him if he will give attention to it”).  Not only did he administer a home and school for juvenile delinquents and a similar institution to train apprentices of the metalworking trade, he became an active member of the New York Public School Society and a commissioner of the Board of Education.  He even assumed care for his disabled brother for 26 years until his passing, which occurred not long before Curtis’s own death in 1856.

Joseph Curtis served as a shining example of moral integrity that would have resonated with the Jay Family and many others.  The New York Historical Society has in its collection a pair of silver pitchers presented to Curtis by the Manumission Society of New York in recognition of his work towards the enactment of the 1817 anti-slavery law. These beautiful vessels are each engraved with an image of Lady Liberty unchaining two enslaved people. Curtis himself is depicted holding a mirror aloft to capture the rays of the sun and direct the warmth and light towards the newly freed men (see a picture at http://www.nyhistory.org/exhibit/pitcher-239 ) Could Curtis’ involvement with the Silversmiths have had some influence on the selection of this gift or does it simply reflect his “sterling” character and selfless philanthropy?

Jeff De Toro is a volunteer docent and researcher at the Jay Heritage Center. In addition to helping transcribe 18th and 19th century letters and put them in context for other, he assists with the many school groups that visit our site each spring. We look forward to more of his future posts!

[3] Journal of the Senate of the State of New-York at Their Thirty-Ninth Session, Began and Held at the City of Albany, the Thirtieth Day of January, 1816, printed by J. Buel, Printer to the State, 1816.