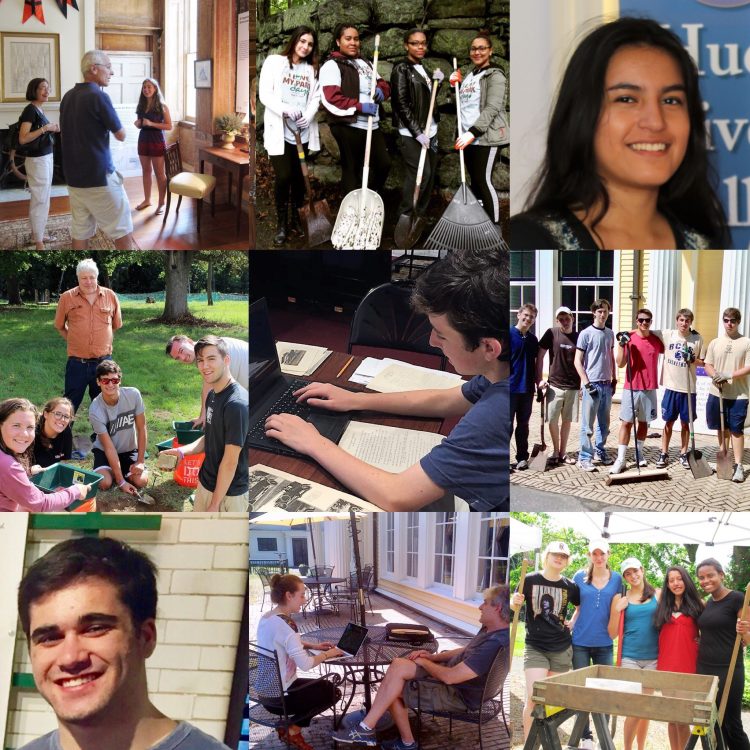 Each year, the Jay Heritage Center is fortunate enough to attract dedicated high school volunteers who help with research and act as docents on Sunday afternoons, sharing the new discoveries that they have found. We look forward to engaging more volunteers this spring and summer and will be hosting an Open House on Saturday, April 14 at 10:00am.

Below are excerpts of two students’ experiences:

Volunteer #1 – “my dream of teaching others”

The ivory columns give way to a dramatic view of the Long Island Sound. As I arrive at the small but magnificent house, I spot the stern portraits of John Jay beside the French furniture, and a sense of grandeur overcomes me: I’m on the same spot where John Jay, first Supreme Court justice, celebrated the completion of the Treaty of Paris and the establishment of the independent United States. There is important work to be done.

In the small space set aside for me, I continue my research of historical records. My current project is to trace the path of Jay family friend, Alden Twachtman, in World War One. I meticulously take notes on historical accounts of Twachtman’s Army Division from a book I’ve borrowed from a local historical society and scour archives of the New York Times for accounts of Twachtman’s residence. To me, the whole project is fascinating: it’s like piecing together an enormous puzzle — I algorithmically locate fragments of the past and sequence them, focusing on the niches that fit everything together perfectly. I’m not reading a textbook; I’m re-creating the story of one of the most decorated officers in World War I. Through his experience I live the cavalry charges, last stands, and triumphs Twachtman saw in northern France.

Suddenly, I’m called away from my research to help a young couple tour the house. As we meander, I recount the symmetric architecture used by Peter Augustus Jay to open his estates to the sea, the gold leaf on the living room walls that reflected light long before electricity, and Mary Rutherfurd Jay’s pioneering garden designs. I take thousands of minute facts and details I’ve learned in my experience here and weave them together into a three hundred year narrative. Even though the inhabitants of this house are long gone, their stories come to life. Giving tours makes history relatable because it combines content with informal conversation, something I have fallen in love with here.

Because our not-for-profit is small, we are always looking for ways to reach out to the larger community. I have been blessed to have the opportunity to plan events such as a debate night and advertise our programming to local media. Historically significant places like these hold enormous, untapped value for the community as centers for civic education. The Jay Heritage Center has made my dream of teaching others all that I’ve learned here come true. As I walk out of the Jay house, I consider, ever deliberately, that here, only twenty minutes away from my house, the very foundations for our nation were established.

Over my time volunteering at the Jay Heritage Center, I have come to realize how much unique American history is contained within. Every time I arrive at the Center I am treated with a new adventure and I have learned so much about our nation’s founding.

For example, as the Center is also an active archaeological site, I spent several days this past summer helping to excavate specific dig spots on the property. We ultimately uncovered artifacts that spanned several centuries of history including arrowheads, bricks and hand wrought nails.  In previous years, archeologists have been able to uncover prehistoric blades known as “flakes” evidencing early Native American occupation on the property from thousands of years ago, as well as 18th century stoneware and copper buttons used in daily life.  One significant find by archeologists several years back, was an 18th century British Army buckle, supporting accounts that British troops may have camped out at the farmhouse when John Jay’s parents had to vacate it for safety reasons during the Revolutionary War.

On another occasion, I was able to see John Jay’s grave up close, when one of his relatives visited the Jay Heritage Center and allowed us to enter into the private Jay family cemetery with him. There I was able to see first hand the inspiring epitaph written by his son Peter Augustus Jay, as well as the final resting place of many of John Jay’s ancestors.

That said, the vast majority of my most memorable experiences at the Jay Heritage Center are also readily accessible to the public. For example, I wandered around the Van Norden carriage house and learned about Mary Rutherfurd Jay, a famous garden architect who was a descendant of John Jay. In exploring the nooks and crannies of the Jay Mansion, I learned new information about another Jay descendants, such as Jack Ide, an aeronautic engineer and government spy before and during World War II.

Among the highlights of my experience at the Jay Heritage Center has been Jay Day, an annual event hosted by the Center each September. This past year, hundreds of adults and children attended. The festivities included horse rides, face painting, and lawn games. From my vantage point on the porch of the Jay Mansion, I was able to see children exploring the inside of the Jay Mansion, while others painted on a giant canvas laid out on the field. This seemed to epitomize the essence of the Jay Heritage Center, as hundreds of people explored the history of this property. I enjoyed seeing this new chapter in the history of this property unfold before me.

My experience volunteering at the Jay Heritage Center has been fabulous. It has been filled with endless new adventures and history. Having grown up several miles down the road, I feel a connection to this place that has helped to nurture my passion for history.  I have especially enjoyed sharing this place with others, as I want them to have the chance to experience such historical landmark just as I have.