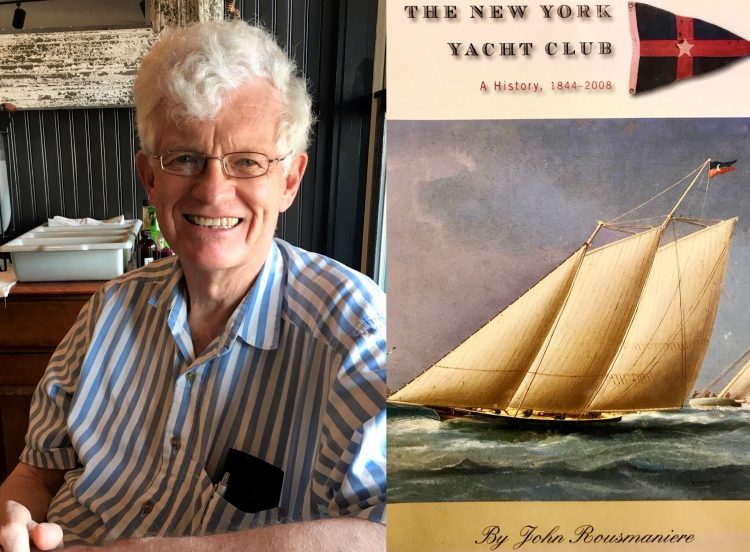 Join us on Wednesday, May 16th at 7pm for an evening of American sailing history with John Rousmaniere at the home of a New York Yacht Club founder.

John Rousmaniere’s 30 books range over a world of topics, but he is best known for writing about sailing in all its facets – including seamanship, storms, sailing safety, the America’s Cup, and stories of America’s yacht clubs, including the New York Yacht Club, where he is club historian. His illustrated talk is about what he calls The Golden Pastime – the great sweep of sailing that stimulates dreams in us all, whether to sail across the Gulf Stream in a big ocean racing yacht (as he has done many times) or to cross Long Island Sound in a small family boat (that, too). He is especially please to come to the Jay Heritage Center because, like the Jays, he has Huguenot blood.

A longtime member of the New York Yacht Club, John is an alumnus of Columbia University (B.S. and M.A.) and Union Theological Seminary (Master of Divinity). His speaking venues include Peabody Essex Museum, Newport Preservation Society, Herreshoff Marine Museum, Greenwich Historical Society, U.S. Naval Academy, Century Association, New York Yacht Club and many other yacht clubs, Cruising Club of America, etc. He is a recipient of the William P. Stephens Award from Mystic Seaport –  the award is given in recognition of a significant and enduring contribution to the history, preservation, progress, understanding, or appreciation of American boating.

The Jay Estate in Rye is the home of NYYC’s John Clarkson Jay, owner of La Coquille, an 1842 George Steers design. Numerous Jay descendants and descendant of other notable residents were active sailors including former American Yacht Club Commodores Edgar Palmer and Walter B. Devereux.