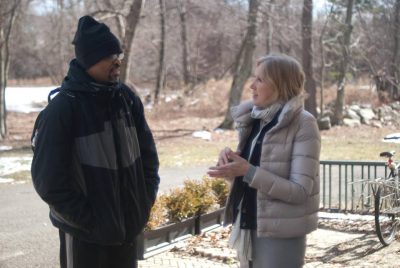 (Photos – Top to bottom: Suzanne Clary, President of the Jay Heritage center speaks with a teacher after a performance of Striving for Freedom; Friends of Bedford Burying Ground; and North Castle historian George Pouder with his wife Aurelia)

In 2014 the Westchester County Historical Society (WCHS) inaugurated an award to honor the life and work of WCHS trustee Sy Schulman, who died in 2012. Schulman had a significant role in shaping the Westchester we know today as the county’s chief planner and planning commissioner in the 1960s. Under Schulman’s stewardship, Westchester County entered into agreements to acquire parkland for the benefit of the community. In fact, Schulman’s role as an advocate of parks earned him the admiration of Laurance Rockefeller, chair of the New York State Council of Parks, who eventually invited Schulman to manage the State parks within New York City.

Through his life, Sy Schulman championed the cause of preserving and promoting the history of Westchester County. Winners of the award have demonstrated a strong commitment to historical research, historic preservation, and/or the teaching of local history, and have, as a result, elevated the public’s appreciation of the history of Westchester County. This year’s Awardees are: Suzanne Clary, President, Jay Heritage Center, Rye; George Pouder, member of the North Castle Historical Society and historian of Civil War cemeteries in Armonk; and the Friends of Bedford Burying Grounds, a group of volunteers dedicated to preserving and conserving Bedford’s historic cemeteries. In addition to the awards ceremony, there will be a keynote by Saratoga Springs Historian Field Horne. Field Horne is the author of the forthcoming WCHS history of Westchester which will be published in September; he will give a talk on the challenges and rewards of writing history. Westchester County Historical Society, founded in 1874, is the official County Historian. It houses the largest collection of local history in the county and makes that collection available to the public on a regular basis. It publishes books on local history and has published its quarterly magazine, The Westchester Historian, since 1925. The Society is a member based, not-for-profit corporation. Its annual meeting will be held on June 16th at 2:00pm at the John Jay Homestead, Katonah. The meeting is open to the public, although reservations are required. For further information, contact the Society at (914) 592-4323 or email them at info@westchesterhistory.com . Download ticket info here.