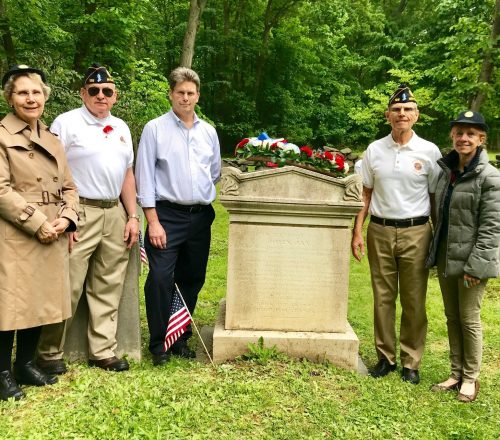 Rain stayed in abeyance for Rye’s 2018 Memorial Day Parade and an observance of national service at the private Jay Cemetery later the same day. For the 5th year, the Jay Heritage Center and its youngest patriotic supporters waved flags from our ever popular horse drawn “Path Through History” carriage. Their parents marched alongside as they made their way down Purchase Street led by County Executive George Latimer and members of the Rye City Council.

In the afternoon, members of the Jay Cemetery Association, the American Legion of Rye, Post 128,  and the Jay Heritage Center gathered with the public to honor Founding Father and peacemaker John Jay at the private cemetery he established in Rye in 1807 for himself, his parents, siblings and beloved wife Sarah Livingston Jay – many of his descendants and their spouses are also interred there. It is the oldest active cemetery in the nation associated with a pre-eminent figure of the Revolutionary War. Jay served his country in every branch of government leaving an exceptional legacy of service for his descendants and all Americans

Though it is regularly closed to the public, it has been opened on very special occasions in years past. Peter Doane, President of the Jay Cemetery Association laid a wreath on Jay’s monument following a brief program and shared the compelling narratives of the veterans buried there including DeLancey Kane Jay, a recipient of the Distinguished Service Cross for extraordinary heroism earned while serving with the 307th Infantry Regiment, 77th Division, A.E.F., at Chateau du Diable in 1918.

Members of the Legion and its Auxiliary including Commander Fred DeBarros, Gene and Nancy Collins and Robin Latimer marked the graves of a dozen veterans with flags. Guests were welcomed back to the 1838 Jay Mansion for tours and red, white and blue cupcakes. More photos of the day can be seen on our Facebook page