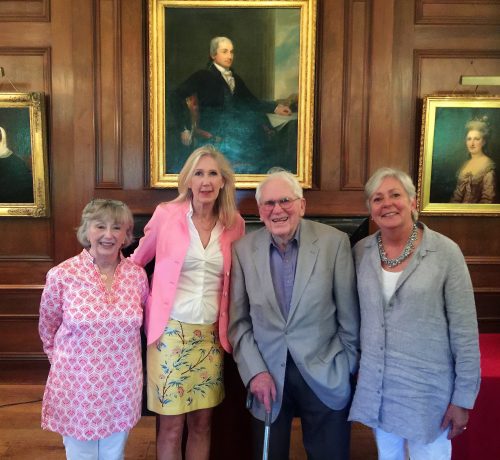 On Saturday, June 16th, 2018, the Westchester County Historical Society (WHS) bestowed its highest honor, the Sy Schulman History Award, upon 3 individuals and one non-profit preservation organization. The 1924 Iselin Ballroom of the John Jay Homestead in Katonah was filled as winners of the award were introduced and recognized by their peers. Selected for their “strong commitment to historical research, historic preservation, and/or the teaching of local history” were the Friends of Bedford Burying Grounds represented by President Jenny Marshall Weisburger; historian George Pouder of North Castle; Suzanne Clary, President Jay Heritage Center ; and Katie Hite, Executive Director of Westchester County Historical Society . The event included terrific introductions and accolades from WHS President Lee Pollock, along with fellow Trustees Anthony Czarnecki,  Russ Watsky and Gray Williams, author of Picturing Our Past – a handsome and authoritative compendium of over 200 National Register sites in Westchester. After the awards, all enjoyed a keynote by historian Field Horne who has helped a write a new History of Westchester County, the first of its kind to be published in several decades.

The Sy Schulman History Award was named after a politician and urban planner who was also the founder of the Westchester County Association. He served as mayor of White Plains from 1993-97 and as manager of the New York State Parks in New York City. Winners of the award have been chosen for having “elevated the public’s appreciation of the rich history of Westchester County.”