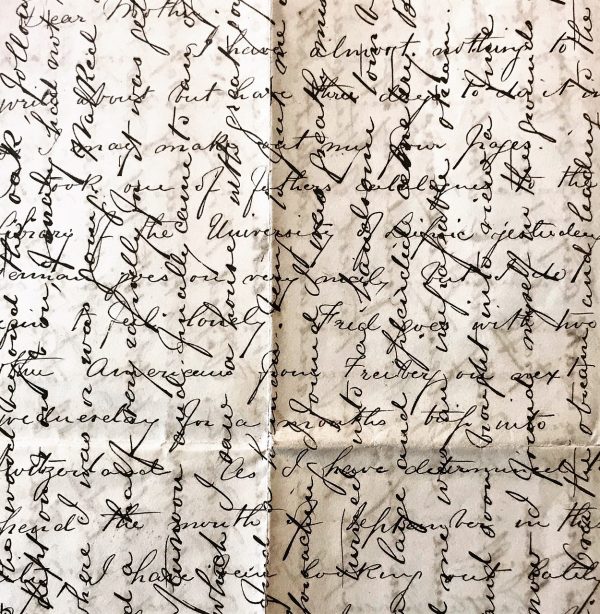 Disease and threats to peace were constant worries in 18th and 19th century America and abroad. Not surprisingly, the health and well being of others is a uniting thread throughout the many Jay family letters in our archives. We thank our volunteers for transcribing these primary documents (some of which were penned in crosswriting to save their authors postage and paper). These transcriptions afford us a rare look at the shared fears and personal observations of the Jays and their peers about historic events from cholera epidemics to war.  In the upcoming series of essays, excerpts of the letter or diary upon which each essay is based will be attached.

Cholera is a bacterial disease of the intestine that is normally spread through contaminated water or food, causing dehydration, diarrhea, and in some extreme cases, death. Today, it is very rare and is treatable by a medical professional. However, at a time when one’s grasp of medical knowledge was low and when hygiene wasn’t the best, cholera spread quickly and easily, and killed hundreds of thousands of people in the process. When John C. Jay Jr, grandson of Chief Justice John Jay, was in Leipsic, Germany in the summer of 1866, he got to experience the full force of one of these pandemics.

According to Jay, the presence of cholera in Germany took off after the Seven Week’s War (1866), a war won by the Prussians that basically unified Germany and put Otto von Bismarck in charge, thus setting the basic groundwork for World War I. In his words from a letter home to his mother, “The Prussian black hussars came here direct from…places the disease has been most severe & shortly after their arrival the cholera deaths here increased very noticeably.” 1 In other words, since cholera is often found in water contaminated by human feces, Jay is saying that the soldiers contaminated local water with their waste, thus spreading the disease to new heights. Jay has also said that these soldiers came from the Baltic, an area which I can infer was hit very hard with the disease. There, the soldiers must have eaten contaminated food or drank contaminated water, infecting them, and from there it just took off.

The “taking off” of this outbreak had also understandably had a huge impact on the community of Leipsic, with “Special prayers…read for…Cholera (victims)…” 2 at almost every church service that he attended, Jay said in that same letter. This means that that the town was devastated with many of their own passing in the “struggle”.

It may have also been spread through poor hygiene on the part of the citizens of Germany, as at this time bad habits when it came to cleanliness ran rampant amongst the people. In the letter, Jay also stated that “…Hygiene can mitigate if not wholly prevent it.” 3 This lack of proper hygiene, though a pressing problem, was just one of several causes that caused just one of several outbreaks that occurred in the much larger Fourth Cholera pandemic, which lasted from 1863-75 and spread from India all the way to parts of North America through pilgrims and trade.

When it comes to the impact on Germany, though, the Austrian Empire (which once was one of the two major powers of the German Confederation before the Seven Week’s War) lost an estimated 165,000, though it is unknown how much of those were lost in Germany.

As for John C. Jay Jr, he eventually accomplished what he wanted to in Germany: he learned German and before returning to the United States, completed his medical training at the University of Vienna from 1866-68, as well as one term at the University of Prague in 1867.

I took one of fathers colleagues to the Library of the University of Leipsic yesterday. German goes on very nicely, but I do begin to feel lonely. Fred goes with two & three Americans from Freiberg on next Wednesday for a months trip into Switzerland As I have determined to spend the month of September in this city, I have been looking out lately for another room as I am not comfortable here. Yesterday I found a very nice one on the fifth ave. of Leipsic, but on the 3rd story. The view however from my windows is superb, looking right out upon Rosenthal, a splendid park, in size nearly equaling our Central Park but in beauty not approaching it though the trees from their age are majestic Leipsic, though a  place much frequented by foreigners from all corners of the world, only holds these birds of passage while they transact their business and has few steady sojourners like Dresden or Hanover places frequented by English to economize; Consequently the english chapel here just exists and no more This morning there were 25 heads present of course it’s fearfully high church besides being on the fourth floor in a room belonging to the Conservatorium Special prayers were read for the Cattle plague and Cholera. It’s pretty lucky for Europe that the summer is so far over and that the war has drawn to a close for the cholera has now got a pretty firm footing all through Germany and only winter will entirely eradicate it. It seems to be proved that Hygiene can mitigate if not wholly prevent it. In this city there are points where it is very severe but they are the most unclean. Every effort has & is being taken by the authorities to put an end to it and it is entirely owing to previous efforts that it is not now a raging epidemic. The health commission in New York have obtained the same results. The soldiers have undoubtedly been the means here of its being so disseminated: They brought it here from the shores of the Baltic. The Prussian black hussars came here direct from Dantzic and Stettin at both of which places the disease has been most severe & shortly after their arrival the cholera deaths here increased very noticeably. I went to a concert the other afternoon in Landenan a village a short ways off and saw some performances a la Blondin and heard capital music. Speaking of foolhardiness, did you read that Capt Hudson of U.8.N. and a companion have safely arrived in London from New York in a sail boat of 2 ½ tons, 27 pt long. Can that fool be the Capt Hudson* commanded the Niagara on the first attempt to lay the Atlantic cable. We might just as well have no cable as far as news is concerned for we don’t get any; what does come every day, is disagreeable for it is the price of gold. – Dr. J. C. Jay to his mother Laura Prime Jay, August 26, 1866

**Captain Hudson’s unbelievable feat was to sail a small metallic lifeboat named “The Red, White and Blue” from Sandy Hook, New Jersey to England in an unprecedented 35 day voyage across the Atlantic.

I am 14 years old and about to be a sophomore at Horace Greeley High School in Chappaqua, New York. Ever since I was a small child, I have had a fiery passion for history and almost everything having to do with it, more specifically that of Ancient Egypt and America. This is my first summer volunteering at the Jay Heritage Center, and so far I like it a lot because of my thirst for history and uncovering hidden gems and new discoveries in America’s–and the world’s–history. It has been an enlightening experience for me thus far and I could not have thought of a better way to spend my summer.

I am a swimmer on the Storm Aquatics swim team in Mount Kisco, New York and have been for the past 6 years. It is my second passion, second to history of course. Some other things that I like to do include talking and hanging out with friends, reading (…and occasionally peeking at my phone), learning new things (preferably things about history), playing with my dog and younger brothers, and listening to music, and just like most other boys my age, a large portion of that being of the hip-hop and rap variety.