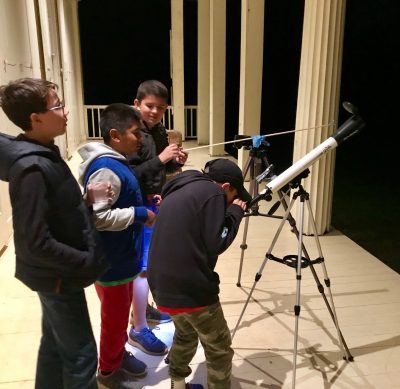 Mamaroneck Troop Pack 2, led by JHC volunteer and docent Jeff De Toro, is possibly the first group of scouts to have come back to camp at the Jay Estate since about 1948!* And they are doing it in a big way! After a day pitching their tents, touring the historic Mansion and grounds and learning about American Founder John Jay, they took a hike down to Milton Harbor through the adjacent Marshlands park. At 6:30pm they met NYC astronomer Jason Kendall who gave them a talk about the Hubble telescope – the group of parents and kids spent the rest of the evening looking for planets and constellations outdoors in the dark night sky over the Jay Meadow.

Ivan and Yeni Morales-Diaz said it was a great experience for their son and his friends – it helped them better appreciate all the work that has been accomplished to make the park safe and enjoyable. They were astonished that the site is largely powered by volunteers. Everyone slept under the stars continuing an old tradition of embracing the elements and appreciating nature and the great outdoors. The troop packed up their gear in the morning leaving no trace in the park they are helping to protect and preserve.

*Camping out at the Jay Estate is by permission only at this time as we are working on restoring the property first. We were happy to grant special access to this troop, members of which have been diligently volunteering for 2 years at the site.

Thirteen members of Troop Five, Rye, Boy Scouts of America, spent an enjoyable Columbus Day in the open at the Palmer estate, Boston Post Road in Rye…One of the highlights of the day was the discovery by Scout Bob Hilldale of several Dusky Salamanders under some rocks in the brook which flows through the property.