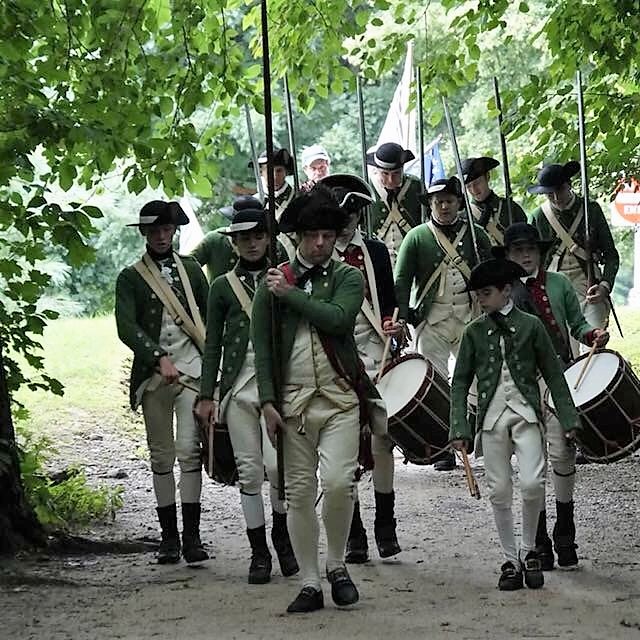 Hamilton’s militia is coming! Don’t miss a rare (and FREE) performance by the The Hearts of Oak Independent Militia Company at the historic Jay Estate on December 8. It’s all part of the launch of #RevolutionaryWestchester250!

Music and musket drills start at 11:30 am. The Hearts of Oak militia was originally based in colonial New York and formed in 1775 as a spinoff of an earlier group known as the Corsicans. Militia members included students at King’s College (now Columbia University) most notably, Alexander Hamilton and John Jay’s brother Frederick Jay. Uniforms were “short Green Coats, Small round Hats Cock[ed] on one side. A Red Hart of Tin with the words, God and our Right, round the Crown Liberty or Death.” It was as a member of these two connected groups that Hamilton first received his military training.

Watch the militia drill and learn about their uniforms and muskets. On September 14, 1775, Frederick Jay was commissioned first lieutenant of the “Heart’s Oak” company in Col. John Lasher’s 1st Regiment of New York Independents. George Washington would later request Frederick to help with the transport of Loyalist members of the Philipse family including Frederick Philipse, Sr. (1720–1786), the brother of Mary Philipse (both cousins of the Jays.)

In Consequence of my Orders, the undermentioned persons have been apprehended and are now under a Guard at New Rochelle or its Neighbourhood.  As the sending a Guard thro’ to Govr Trumbull with them would be attended with much Inconvenience to the public and cannot be agreeable to the Gentlemen Upon their giving you their Word & Honor to proceed to Lebanon to Govr Trumbull I am satisfyed to permit them to go without any other Escort than that of the Officer who will deliver you this. I must beg the favor of you to take the Management of this Business and as soon as it is put upon a proper Footing dismiss the Guard now there. I am with due Respect Sir Yr most obt Servt.