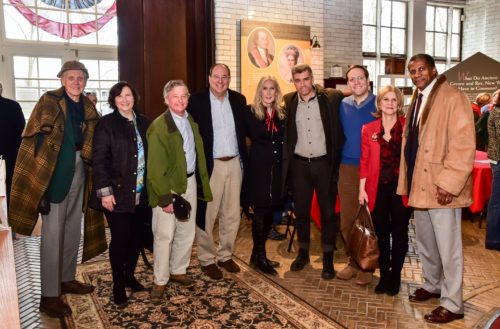 Everyone had a front row seat to history at the ancestral home of Founding Father, patriot, Revolutionary spymaster and peacemaker John Jay in Rye, New York. Families marveled at authentic musket drills with powder from the 2nd New York Provincial Battalion;​ they heard the fife and drums played with skill and vigor by The Hearts of Oak Independent Militia Company, the militia of Alexander Hamilton and Frederick Jay. The landmark site positively teemed with revolutionary history enthusiasts of all ages and perhaps a few Patriot, Cowboy and Skinner ghosts of the 18th century!

Westchester County Executive George Latimer presided over the day long celebration. The event was a kick off to the next 8 years of planning leading up to our country’s 250th anniversary of independence in 2026. The goal of RW250? “to engage with all our local communities to build public awareness, excitement, recognition and capacity for the local efforts, programs and celebrations of the critical and sustained role Westchester County played in the American Revolution.”

Historian and author Mary Calvi was a huge draw.  Her audience was enthralled by her topic – George Washington’s romance with a Loyalist heiress, Mary Phillipse of Yonkers. Her listeners received a special pre-order bonus for her debut novel “Dear George, Dear Mary” . The book will be published by St. Martin’s Press in February 2019 just in time for Presidents Day Weekend. The 9 time Emmy award winning CBS anchor gave a standing room audience a glimpse into the world of historical research from genealogy to her deciphering of old handwritten archives. As one historian wrote after, “Mary Calvi’s talk intrigued the audience with a colonial gossip column that was interesting on top of unexpected…The founding fathers were actually real people with real, intricate lives.”

Government staff and officials invested in the economics of tourism and building awareness about our County’s rich heritage included NY State Senator Shelley Mayer, NY State Assemblyman Steve Otis​, Westchester County Legislators​ like Mary Jane Shimsky, Natasha Caputo from Westchester County Tourism, ​ and Linda Cooper from NY State Parks & Historic Sites. Participants and presenters included director Jeremy Davidson and actors from Storyhorse Documentary Theater​ who read excerpts from their play called “The Kept Private,” a dramatic tableau about the ordeal of a 93 year old black man applying for his rightful Revolutionary War pension. The day was organized by Suzanne Clary, President of the Jay Heritage Center, Connie Kehoe (Executive Director of RW250), and Katie Hite (Executive Director of Westchester Historical Society). Presenters included Olney Reynolds, Vice President of the African American Men of Westchester​; heritage preserver George Harmon who spoke about his father’s legacy spearheading the historic Monument to the First Rhode Island Regiment memorializing the integrated regiment that fought at Westchester’s Yorktown; historian and author Gray Williams who detailed the experiences of of Quakers during the war; photographer Frederick Charles, who limned the skirmish of Edgar’s Lane and teacher and historian Erik Weiselberg who spoke about the unsung of the war. Attendees included board members of the American Women of African Heritage, The African American Advisory Board, Thomas Paine Institute, Mamaroneck Historical Society and more. The Journal News​, Sharc Creative Inc​,  Westchester Talk Radio​ and Kim Crichlow Photography captured all the energy of this historic day.

Kudos were heaped on Jimmy’s Soft Serve​ for the free hot chocolate (it kept everyone toasty), The Rye Country Store​ for always delicious refreshments, Rye TV​ for getting video of the entire day plus applause for the The Yale Spizzwinks(?)​ for helping us top it all off with a toast to John Jay’s birthday!

Were you there for this historic event? See more photos on our Facebook page or share your photos with us. Watch our website for news of future #RW250 events.