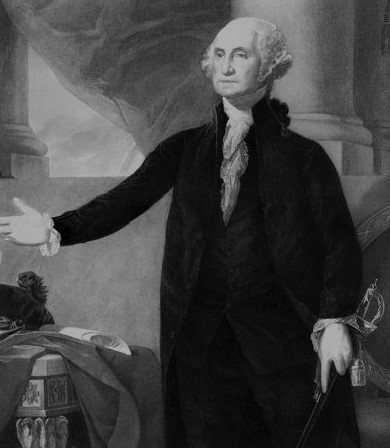 One of the most recent donations to the Jay Heritage Center (JHC) has been a rich trove of  antiques, decorative porcelain, glass and silver, oil portraits and engravings. These historic pieces were donated by the children and grandchildren of the late Mrs. Bennett Pierrepont Jack of Yeaman’s Hall, South Carolina, descendants of William Kerin Constable and Anna Maria Jay Pierrepont.

These items will help JHC interpret the union of the Constable, Pierrepont and Jay families not only as a merging of industrious, patriotic New York families, but also a linking of patrons of early American artists. Among the items is an original engraving of Gilbert Stuart’s Lansdowne portrait of George Washington, perhaps the most recognizable rendering of our nation’s first President (got a dollar bill handy? Yes that’s the same face!) It was John Jay who first introduced Stuart to Washington and as a result, Stuart painted multiple portraits of the president over his lifetime. As Stuart was painting the Lansdowne portrait in 1796, William Kerin Constable, a former aide to the Marquis de Lafayette during the American Revolution and a wealthy New York merchant, commissioned Stuart for a family portrait. Upon seeing Stuart’s progress on the Lansdowne portrait, Constable commissioned his own, and Stuart worked on both Washington portraits side by side to ensure they were each “originals.” 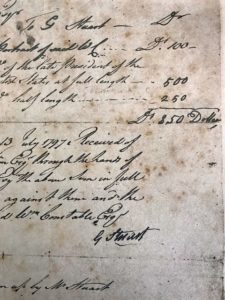 The resulting painting of our nation’s pre-eminent founder was treasured by Anna Maria Constable, William’s daughter, who, after their parent’s death, bought the painting from her brother and proudly displayed it in her home in Brooklyn Heights. Anna Maria passed the portrait on to her son Henry Evelyn Pierrepont, who recalled that family and friends including Lafayette who saw the painting in person “considered Stuart’s portrait [of Washington] a correct and perfect likeness.” Consequently, throughout the nineteenth and early twentieth centuries, the Pierrepont family commissioned multiple engravers to copy the original Stuart portrait, which now resides in the Brooklyn Museum. One of these rare engravings by Petit and a copy of Stuart’s bill for the painting are now on view in the Jay Mansion. 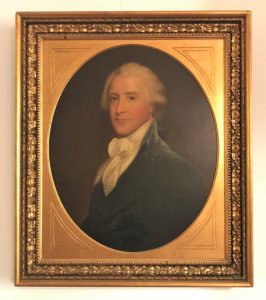 In addition to the engraving, JHC received a portrait of Constable himself executed in 1868 by National Academy of Design artist Henry Augustus Loop. The painting was based on an earlier portrait also by Gilbert Stuart which today is in the collection of the Metropolitan Museum of Art.

Emigrating from Ireland to America as a child, Constable lived in Montreal before settling in Schenectady, where he apprenticed at a trading house. Once war broke out, Constable traveled to Philadelphia, buying goods for the Union army, before serving under the Marquis de Lafayette, who remained close to the Constable family throughout his life.

Marrying Ann White during the war, Constable supported his new family by trading with the West Indies. In 1784, he would settle in Brooklyn. He arrived in New York at about the same time as Alexander Hamilton and they would become close friends. After forming the Constable, Rucker and Company trading house, Constable’s firm became the first in America to outfit ships for trade with China and India. Upon his partner’s death in 1788, Constable continued successfully traded by himself, becoming one of the wealthiest people in America. Partnering with his brother, James, Constable turned his attention to land speculation, spending the last years of his life focused on westward expansion.

Colleagues remembered Constable as a vivacious personage “I first saw him in 1796, at a dinner party.  Among the distinguished persons present were General Hamilton, Colonel Burr and Volney.  Yet, even in such good company, all eyes and ears were turned to him, and he appeared to be the master spirit…his most intimate associates were Jay and Hamilton, and Robert Morris, and other master spirits of the time……He lived in splendid style.”

Not surprisingly, this master spirit from Ireland vividly depicted in both Stuart and Loop’s paintings helped found a chapter of the Friendly Sons of St. Patrick’s in New York City in 1783. The Society gave charitable aid to “impoverished and displaced Irishmen, who had arrived in New York in the wake of the British evacuation” of Manhattan. Constable was president of this institution in 1789-90 and again in 1795. Another society that drew Constable’s support was the New York Society for the Manumission of Slaves which also counted Jay and Hamilton as members.

The portrait of Constable by Loop now hangs in the Jay Dining Room thanks to the generosity of his descendants who can count both this Irish patriot and American founder John Jay as ancestors. Loop’s paintings can be found in other collections including the Yale Art Gallery (Jonathan Edwards), the US Navy (Admiral David Farragut), and the US Supreme Court (John Jay).

Zarina Iman, Horace Mann ’18 volunteered at JHC during her Junior and Senior years as a docent, writer of press releases and also helped decipher original 19th century Jay family documents.  Look for more posts about the 1807 correspondence she transcribed and the historic events referenced in these letters including the trial of Aaron Burr.

See all our volunteer blogs at/ https://jayheritagecenter.blog