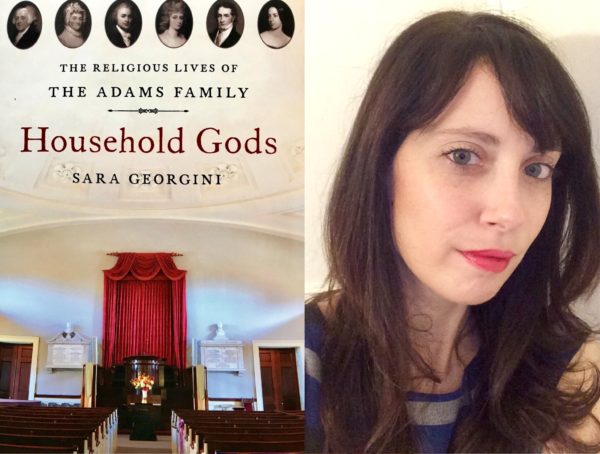 Join us for a talk and book signing by Sara Georgini, author of “Household Gods: The Religious Lives of the Adams Family”. Georgini’s work is a history of faith and doubt in one American family, charting the cosmopolitan Christianity that the Adamses developed while acting as global ambassadors of American politics and culture.

“Georgini shows an immense knowledge of primary sources in this captivating study of how visions of Christianity affected the Adams family thinking from Puritan New England to the Jazz Age. Covered are John, John Quincy, Charles Francis, Henry, and others.” Her talk will illuminate the moral values of two American presidents, with special focus on John Quincy Adams’ advocacy for the enslaved men involved in the Amistad mutiny.

Sara is the Series Editor for The Papers of John Adams, part of the Adams Papers editorial project based at the Massachusetts Historical Society that has published nearly 50 scholarly editions of the personal and public papers written, accumulated, and preserved by President John Adams and his family.

A native of Brooklyn, N.Y., Sara earned her doctorate in history at Boston University. She is a contributor to Smithsonian and the Junto, a Group Blog on Early American History. You can also follow her on Twitter: @sarageorgini.