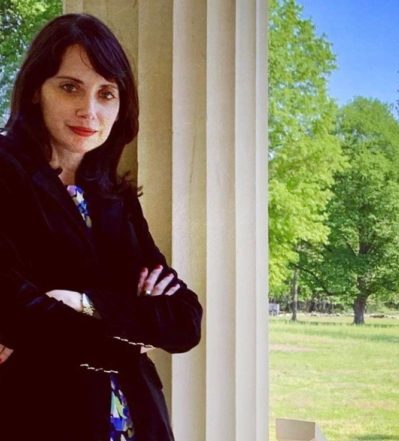 Sara Georgini, author of “Household Gods: The Religious Lives of the Adams Family” captivated an audience of early American history buffs with her deft research into the faith of Founding Father John Adams and successive generations of his descendants. Her power point presentation illustrated how the personal canons of two American presidents and their spouses definitively influenced actions in their public and diplomatic lives. A special focus of Georgini’s talk was how such value systems prompted John Quincy Adams’ legal and moral advocacy for the rights of enslaved men in the Amistad mutiny.

Georgini analyzed how this family’s belief system evolved from Puritanism through other expressions of Christianity, Protestantism and was even influenced by Buddhism. Her talk was enlivened with quotes from archival Adams correspondence and private diary entries. A reception and book signing followed on the Jay Mansion veranda in full sunshine.

Sara is the Series Editor for The Papers of John Adams, part of the Adams Papers editorial project based at the Massachusetts Historical Society that has published nearly 50 scholarly editions of the personal and public papers written, accumulated, and preserved by President John Adams and his family.

A native of Brooklyn, N.Y., Sara earned her doctorate in history at Boston University. She is a contributor to Smithsonian and the Junto, a Group Blog on Early American History. You can also follow her on Twitter: @sarageorgini.