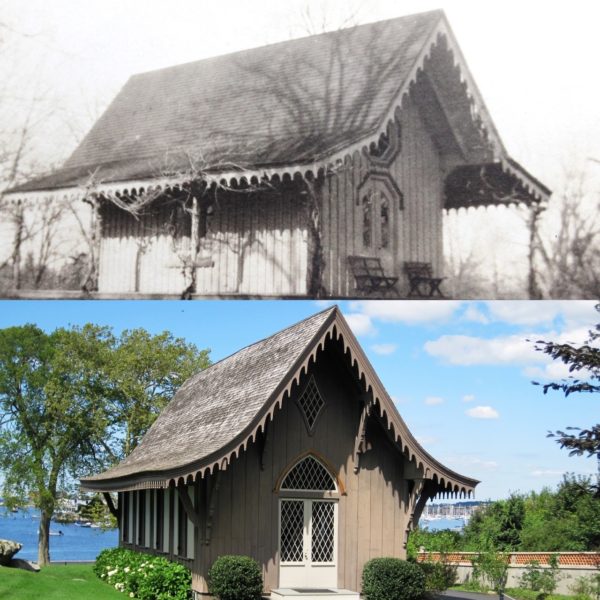 RYE, NY (May 18, 2019) – The Jay Heritage Center (JHC) is the proud and grateful recipient of two transformational grants from the Gerry Charitable Trust – one of $50,000 plus an additional $75,000 Challenge Grant which will match every new donation up to $75,000 if received by March 30, 2020*.  Both these generous initiatives will help JHC interpret the original siting, design and viewshed of a historic Gothic Revival cottage built in 1849 at the Jay Estate based on plans by the notable American architect, Alexander Jackson Davis (1803 – 1892). JHC proposes to rebuild the exterior profile of the 1849 Jay cottage complete with its classic gingerbread trim and re-imagine it as an open air, outdoor learning pavilion for adults and children.

Over the years, the cottage succumbed to rot and carpenter bees. In 1958 it was replaced by later residents with a pool house which itself fell into disrepair. Fortunately, numerous photos of the original Jay Summer House exist.  JHC will use these photos together with scaled elevations from a similar extant cottage called “Station 10” that was designed circa 1844 by A. J. Davis – that structure, built for Dr. Jay’s cousin, John Cox Stevens, was the legendary first clubhouse for New York Yacht Club.

The resulting structure will help visually connect several rich architectural narratives underpinning the entire 286-acre National Historic Landmark Boston Post Road Historic District area in Rye of which the Jay Estate is a keystone. (There is another neighboring 1854 A. J. Davis building, Whitby Castle, that is Gothic Revival and is included in architectural walking tours for comparison with the Jay Mansion and the neighboring Greek Revival mansion Lounsbury).  Second, the new pavilion will meld 2 discrete phases of an ongoing innovative $1.5 million landscape rehabilitation that illuminates the many hands and minds, Jays and others, that left their imprint on the earth. Third, it will provide a unique “new and old” outdoor classroom for JHC’s educational programs about American history, cultural identity and placemaking to expand.

This project, anchored by the Gerry Charitable Trust, and supported with the help of new donors,  will vibrantly enhance the experiences that JHC can offer to the next generation of young people who dream of being preservationists, architects and landscape stewards.

* Help us meet our challenge gift! If you would like to make a matching donation towards the Jay Summer House please mail your check to Jay Heritage Center/ Gerry Charitable Trust Challenge Grant, 210 Boston Post Road, Rye, NY 10580 or contact us at jayheritagecenter@gmail.com to find out how to make a gift online or of stocks.