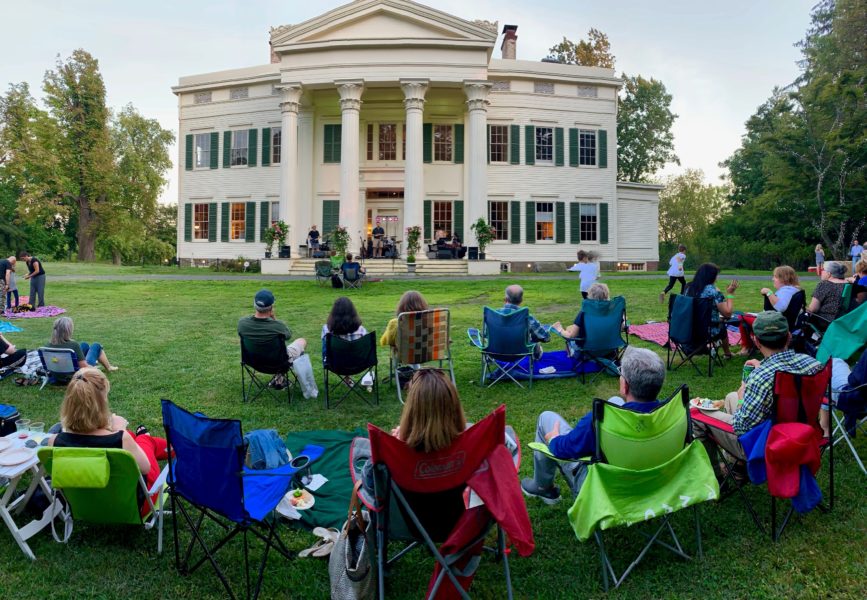 At the original Woodstock music festival — 50 years ago this summer — heavy rain and thunderstorms drenched the concertgoers. The weather became part of the show’s mystique; it was so bad on Sunday, August 17, 1969, the day the festival was supposed to end, that the evening’s main act, Crosby, Stills & Nash, didn’t take the stage until 3 a.m.

Fortunately, the elements at the Jay Heritage Center last Friday night — when we held our own Woodstock 50th anniversary show — could not have been more cooperative. The weather ended up being cool and clear, a perfect night for an outdoor summer concert.

Our headliner was the local band Crazy Otto — led by Ken Dircks on vocals and bass. They kicked off the night with a cover of “Cripple Creek” by The Band, one of Woodstock’s iconic acts. In the crowd — in lawn chairs and on picnic blankets out front of the 1838 Peter Augustus Jay Mansion — heads started bobbing when the band launched into “Piece of My Heart” and “Me and Bobby McGee” by Janis Joplin. Their performance of Bob Dylan‘s “Mr. Tambourine Man” drew cheers and whistles from the audience.

By the time they closed the first set, with an energetic rendition of the Beatles’ “With a Little Help From My Friends” (performed at the original Woodstock by Joe Cocker) the sun had already begun to set. After a short intermission, the band returned to the front portico of the Jay mansion, where purple psychedelic lights illuminated the Greek columns. At the end of a 45-minute tribute to one of Woodstock’s most memorable acts, the Grateful Dead, Crazy Otto had parts of the audience up out of their lawn chairs and dancing in front of the makeshift stage.

At the first Woodstock, revelers ended up splashing in the mud until late the following Monday morning. There was so much garbage left behind that discouraged cleaning crews shaped the debris into a giant peace sign that was visible from the air. At the Jay Estate, by contrast, the crowd was polite and tidy. By the next morning, there remained only a stray string of beads or two nestled into the grass — a reminder of the pleasant late summer evening before. 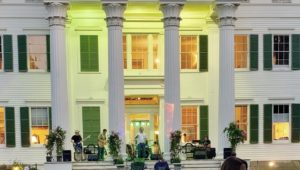