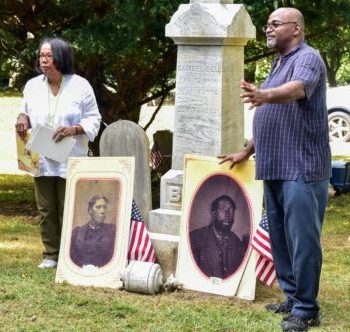 On Saturday, September 28, 2019, more than 130 visitors poured into the African American Cemetery in Rye — for the first of several events co-sponsored by Westchester County’s African American Advisory Board, timed to coincide with the 400th commemoration of the beginning of slavery in America in 1619. “There is a lot of history here that needs to be remembered,” said Westchester County Executive George Latimer. “Underneath the grounds of this cemetery lie hundreds of African Americans whose lives both as war veterans and local residents remain unknown. These tours will provide a unique opportunity for visitors to learn more about the freed and escaped slaves, and ensure that those interred here are never forgotten.” Chairperson of the African-American Advisory Board Barbara Edwards, Esq. agreed that this notable event is ideal to kick-off a series of activities celebrating African-American history, heritage and culture, affording Westchester County residents an opportunity to tour this sacred site, and learn of the rich legacies of those buried there.

Dave Thomas, President and Founder of the Friends of the African American Cemetery led a dynamic tour of the cemetery, sprinkling his talk with historical and biographical detail about the more than 300 African Americans who are buried at the cemetery. The burial ground, which is adjacent to the Greenwood Union Cemetery, was established more than a century and a half ago and includes veterans from the Civil War.

As visitors ambled past, Boy Scouts from local Troop 400 and other volunteers demonstrated how to gently clean the headstones of built-up dirt and debris with a special solution. Carol Ubosi and her daughter, Naji, descendants of individuals buried in the cemetery — including Cpl. Samuel Bell of the 54th Massachusetts Infantry, the unit whose story was chronicled in the 1989 movie “Glory” — mingled with guests and told stories about their forbears.

Thomas and numerous volunteers have spent a decade working to restore the cemetery after years of neglect. Falling trees sometimes broke headstones in two, and erosion and the elements had obscured many other stones.

Later that afternoon, the crowd decamped to the 1907 Van Norden Carriage House at the Jay Heritage Center for a photo exhibit including artifacts loaned to the JHC by families connected to the cemetery. Suzanne Clary, the JHC’s board president, explained that the goal of the exhibit was to celebrate the rich lives of the descendants of those buried in the cemetery.

The stunning artifacts — loaned by descendants like Carol Ubosi, Robinette Robinson, and Donna Lockley — included a beautiful, intricately embroidered corset, a delicate hat from the Civil War era, and a penmanship book in which a student had written “justice and injustice” over and over again.

But perhaps the most striking piece was a reproduction of a letter, dated April 30, 1865 and written by Edward Purdy, describing a trip to Washington, DC, in the days after Lincoln’s assassination. “I have seen the president’s house and wife and the president himself,” Purdy wrote. “I have seen the man that kill[ed] the president and all that had a hand in it. Booth is his name.”

“This has been such an enlightening experience and I am happy to have learned that The African-American History Cemetery in Rye has been recognized nationally, as well as at the state and local levels, among the most prominent historic places” said Committee Chairperson Kisha Skipper. “I would like to personally thank our Friends of the African American Cemetery and the Jay Heritage Center for partnering with us in our efforts to preserve African-American history and heritage here in Westchester.”

This collaborative community program was made possible by a generous grant from Con Edison. Photos by Kim Crichlow Photography. See more photos on our JHC Facebook page

Part 3 – Photo Exhibit and Reception at the Jay Estate