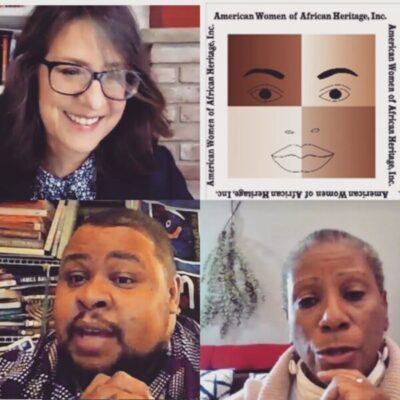 On January 14 , our first program of 2021, “Culinary Justice: Exploring Cultural Resilience Through the History of Food,” drew over 380 registrants! Viewers from all over the world tuned in to listen to a conversation between award-winning culinary writer Michael W. Twitty, author of “The Cooking Gene: A Journey Through African American Culinary History in the Old South,” and Lavada Nahon, a culinary historian, educator, and independent scholar, who is the New York State Office of Parks, Recreation, and Historic Preservation’s first Interpreter of African American History.  JHC Trustee and environmental writer Lori Fontanes moderated their conversation as they examined how the identities and traditions of enslaved women and men have tenaciously survived for centuries through oral histories and recipes that are not always given appropriate attribution, documentation, or examination. How can understanding the “botanical birthplace” of the food we grow help us better understand our complicated American heritage?

Lavada, Michael and Lori took our listeners on a remarkable journey through real American history and offered a frank, eloquent, lively discussion about the difference between food justice and culinary justice, food ways, the hurt of cultural appropriation and the importance of teaching our youth about their heritage and cooking traditions of the African diaspora. We look forward to building upon this discussion and sharing a follow up reading list.

We were humbled by community responses and comments like this one “The Jay Heritage Center has real potential for bringing healing and equity to Rye and the county.” Wow! But we could not do it without the help of longtime community partners, our co-sponsors the American Women of African Heritage (AWAH) along with our esteemed and knowledgeable panelists together with our base of colleagues from NY State Parks and more. They are the reason why last night’s  program was simply outstanding! People from all over the world who care about social justice African-American culture and culinary justice were SO engaged!

Michael W. Twitty is a noted culinary and cultural historian and the creator of Afroculinaria, the first blog devoted to African American historic foodways and their legacies. He has been honored by FirstWeFeast.com as one of the twenty greatest food bloggers of all time, and named one of the “Fifty People Who Are Changing the South” by Southern Living and one of the “Five Cheftavists to Watch” by TakePart.com. Twitty has appeared throughout the media, including on NPR’s The Splendid Table, and has given more than 250 talks in the United States and abroad. His work has appeared in Ebony, the Guardian, and on NPR.org. He is also a Smith fellow with the Southern Foodways Alliance, a TED fellow and speaker, and the first Revolutionary in Residence at the Colonial Williamsburg Foundation. Twitty lives in Silver Spring, Maryland.

Lavada Nahon is a culinary historian and interpreter of African American history, 17th-19th century, focused on the New Netherland/New York/northern New Jersey region. She has 18 plus years of public history experience working with a historic sites, museums, societies, and educational institutions. She has cooked on a variety of the region’s historic hearths, many of which are no longer in use. She has developed educational and teacher development programs, after-school programs, lectures, tours, historic presentations, and period dinners for sites ranging from the New York Historical Society, Fraunces Tavern Museum in lower Manhattan, the Albany Institute of History and Art, Dyckman Farm House Museum in upper Manhattan, Johnson Hall State Historic site, and many more. She worked as a museum associate and educator for Historic Hudson Valley for 12 years at Van Cortlandt Manor and Philipsburg Manor Upper Mills, and as a production coordinator for their special events team for three. Currently Lavada is serving as the first Interpreter of African American history for New York State Office of Parks, Recreation and Historic Preservation, as position she began in the fall of 2019. Her mission is to bring the unique cultural blend of New Netherland history to life, including the under-told stories of enslaved and free Africans and their descents.

Lori Fontanes is a writer, advocate, and backyard farmer who has grown over forty different kinds of fruits, vegetables, cover crops, and heritage waterfowl on land previously used for lawn. Her work has appeared in publications such as Backyard Poultry, Countryside, Acres, Grit and EcoWatch. Lori lives in Rye, New York, where she serves as Vice Chair on the city’s Conservation Commission/Advisory Committee. She is also a member of the Rye YMCA Cross-District Wellness Committee and a board member of the Food & Environment Reporting Network (FERN). An alumna of the Bread Loaf Environmental Writers’ Workshop and the Sundance Film Festival, she speaks frequently about healthy food, climate change, and the environment at venues around the region. Lori received an MFA in Creative Writing from Manhattanville College, where she is an adjunct professor.

Thank you to our longtime community partners, the American Women of African Heritage (AWAH) for co-sponsoring this event.