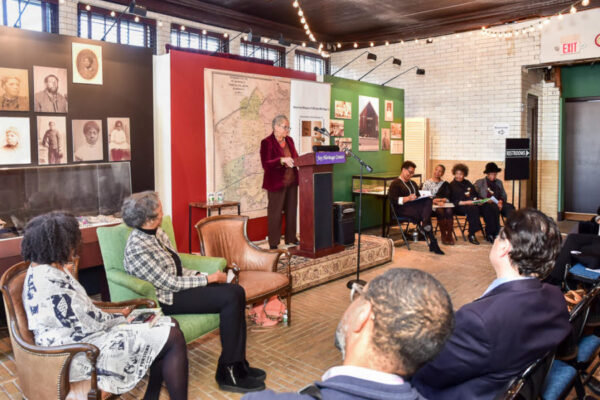 Three renowned writers spoke to a crowded Carriage House on Monday as part of the American Women of African Heritage (AWAH) annual Dr. Martin Luther King Jr. Literary Celebration. This is the sixth year that the event has been held at the Jay Estate in Rye.  The gathering recognizes both established and up-and-coming African American authors. Video by Rye TV here

On an icy afternoon, AWAH President Francine T. Shorts welcomed roughly 100 guests by recalling the long and fruitful collaboration between AWAH and the non-profit Jay Heritage Center. She then introduced Allison Lake, executive director of Westchester Children’s Association, the day’s emcee. After brief remarks, Lake threw the spotlight to vocalist Lori Dixon-Stephens, director of music at Union Baptist Church in White Plains, who kicked off the afternoon’s program with a rousing solo.

Dr. Nell Braxton Gibson, coordinator for the Episcopal Urban Caucus, had the unenviable task of following that act — but held the audience rapt with her discussion of her book “Too Proud to Bend: Journey of a Civil Rights Foot Soldier,” a memoir of her student days in the South during the civil rights era.

The next speaker, Bridgett M. Davis, whose memoir “The World According to Fannie Davis: My Mother’s Life in the Detroit Numbers” was selected as a New York Times Editors’ Choice, was making her second appearance at the Literary Celebration; she had spoken at a previous AWAH event about one of her earlier novels. Back by popular demand, her engaging reading from the prologue of her book both moved and amused the crowd.

Finally, Rudean Leinaeng, a former chemistry teacher at Bronx Community College, gave a captivating talk about her novel, “Coal, War, and Love,” based on the life of her grandfather, a member of the 369th Infantry Regiment — the “Harlem Hellfighters.” 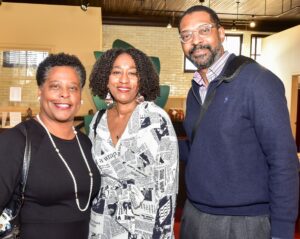 After the remarks, Patrick Corcoran from Arcade Booksellers sold copies of all three authors’ books as the writers chatted with guests and inscribed personalized copies. Tasty bites, including lemon squares from Brenda Jackson-Butcher of Brenda’s Good Food, disappeared quickly from the tables as guests filed out into the winter twilight.