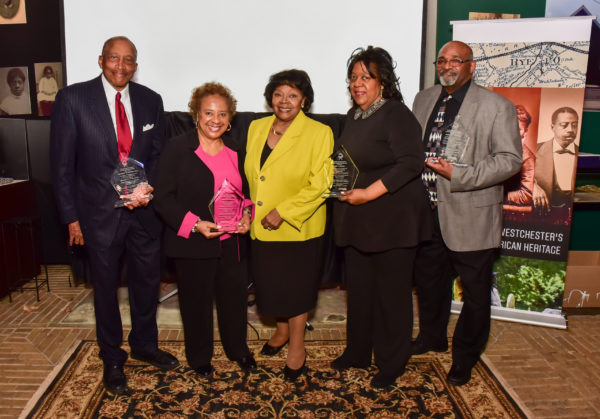 A capacity crowd turned out for the 2020 African American Trailblazer Awards. Honorees included Dave Thomas, the dedicated guardian of one of Rye’s most historic sites, the African-American Cemetery on North Street. Thomas was honored alongside attorney Zachary Carter, Lena Anderson, and Tubman Home founder Karen Hill. The non-profit Jay Heritage Center hosted the event for the 7th year in a row. The ceremony took place at the historic Jay Estate, one of 14 sites on the Weschester County African American Heritage Trail.  A new brochure for the trail organized by the African American History in Westchester 400 Committee chaired by Kisha Skipper was unveiled the same night.

Watch the video about honorees here.

County Executive George Latimer said of the ceremony: The history of our country, and our County, cannot be fully recognized without acknowledging the prominent role played by African Americans. The four talented individuals we are celebrating have contributed immeasurably to the African American history and culture of Westchester. Tonight we honor them for their steadfast commitment to public service and the generous use of their talent, which together can ensure that the legacies of those who came before us, are never forgotten.

Chair of the African American Advisory Board Barbara Edwards said: The Trailblazers Award Ceremony provides an opportunity to highlight contributions offered by citizens of African descent and to recognize the significant value they have added to the rich history of Westchester County, as well as, the Nation.

The 2020 Trailblazer Honorees received awards in the areas of Humanitarian Service, Social Justice, Historical Stewardship and Historical Preservation. This year’s honorees are as follows:

Born in White Plains, New York in 1947, Lena Anderson attended White Plains Public Schools from 1951-1965 graduating in the top ten percent of her class. She began her college education at Morgan State College in Baltimore, Maryland. Anderson moved back to White Plains in 1977 as a seasoned teacher with a MA in Special Education from Coppin State University. She attended NY Law School and received her JD in 1982. Anderson continued her education while teaching, earning another MS in Administration and Supervision from the College of New Rochelle in New York.

She is the current President and Silver Life Member of the White Plains/Greenburgh Branch of the NAACP. Under her leadership, the branch has embraced the National agenda under the seven “Game Changers: Education, Health, Civic Engagement, Criminal Justice, Economic Development, Youth Empowerment and Environmental Justice. She has made issues of inequality and mistreatment a major focus of the branch. Anderson has been a member of Bethel Baptist Church for the past 60 years, serving as Director of Christian Education for eight years. Her work with the NAACP has been her calling as she follows the work of Dr. Martin Luther King, Jr., focusing on voter registration and voter education. Anderson is the daughter of John and Margaret Hargrove, and mother of one daughter, Julia, who has just completed her Ph.D. in Engineering and Math at Iowa State College. Lena continues to parent and mentor young adults in the community.

Zachary W. Carter served as the 78th Corporation Counsel of the City of New York from January 2014 through August 2019. As the chief legal officer of the City, he led the Law Department. His office employs over 1,000 lawyers to serve the multi-varied legal needs of the City, as well as its agencies, officers and employees. Carter advised the Mayor and City commissioners on all legal issues affecting City policies and operations. Prior to his appointment as Corporation Counsel, Carter was a partner in the firm Dorsey & Whitney LLP.  He served as head of the Trial Group at the firm’s New York City Office, and co-chair of the firm’s White Collar Crime and Civil Fraud practice.

Carter served as United States Attorney for the Eastern District of New York, having been appointed by President Bill Clinton. His office prosecuted the full range of federal criminal cases, including official corruption, securities fraud, major narcotics, organized crime, civil rights and human trafficking.  During his tenure, he oversaw the high-profile civil rights prosecutions against the police officers who tortured Haitian immigrant Abner Louima, and the individuals charged with the bias-motivated killing of a rabbinical student, Yankel Rosenbaum, during the Crown Heights riots. Carter has served on the bench, both as a judge of the Criminal Court of the City of New York and as a United States Magistrate judge for the Eastern District of New York. He is a graduate of Cornell University, and the New York University School of Law.

Karen V.  Hill, President and CEO of the Harriet Tubman Home, Inc. is leading the effort to ensure that the legacy of Harriet Tubman, a national treasure, lives on in perpetuity. The Harriet Tubman Home conducts historic tours in Auburn, NY, where Tubman lived for more than half of her 91 years. Hill successfully marshaled the passage of federal legislation to authorize the establishment of Tubman’s homestead as a National Historical Park. Hill brings over thirty years of experience in the delivery, development and advocacy of housing services. Her consulting practice has emphasized the organization of housing, economic and community development professionals, consumers and advocates to accomplish multifaceted research, development and advocacy projects.

Appointed by federal judge Hon. Leonard B. Sand to implement the court’s housing orders in the landmark case linking segregated schools to patterns of housing discrimination, Hill was pivotal in the United States vs. Yonkers Board of Education ET. Al. case. As Executive Director of the Fair Housing Implementation Office, she led the effort to develop a comprehensive plan for 4,000 units of mixed market rate and below market rate housing through new construction, rehabilitation or adaptive reuse. Hill successfully managed the environmental impact study required prior to the housing development going forward. Under the leadership of Vernon E. Jordan and John E. Jacob, she served as Director of Housing and Economic Development of the National Urban League. Hill was appointed by U.S. Senator Schumer to the Women’s Suffrage Centennial Commission. She is a graduate of Simmons College and a sixth generation Westchester County resident.

David Thomas of Mount Vernon is a graduate of Wilkes College, where he earned his Bachelor of Science in Commerce and Finance. Thomas worked a number of jobs before he realized his true calling was computer software. He began taking courses at Westchester Community College, and it was this path that truly resonated with him. Thomas worked his way up the software chain to becoming a certified expert on Microsoft Office Suite. Since that certification, he has held positions as a software trainer and technical writer for several companies. Thomas and his wife of over 30 years Joan began their family, and it was during this time that he became more involved in the community through their children’s elementary school. Thomas volunteered for Thomas Edison Elementary School, where he was known for helping many with their ability to learn computer software.

His expertise also enabled him to refurbish and donate computers to people who could not afford them. It was while Thomas was a consultant for the Town of Rye, and a software instructor for Family Services of Westchester, that he became involved in the community of Port Chester. Thomas was fascinated by the history of the African cemetery at Greenwood Union Cemetery in Rye. The moment Thomas walked through the stone wall of that hallowed ground, he knew his life’s mission had changed. Thomas is grateful for the opportunity he has to bring life to the history of those buried there, and to share it with those who want to learn about it.

Photos from the emotional ceremony below. Photography by Kim Crichlow