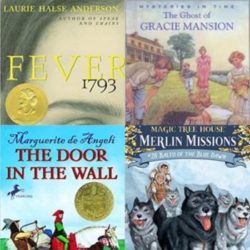 Some events in history feel so foreign and distant that they could never repeat
themselves–until they do. Unfortunately, waves of epidemics have resurfaced through
out the centuries, but so, too, have resilience, ingenuity and humanity. From the bubonic
plague to influenza, people heal and even thrive in the wake of an epidemic. These
books inspire hope and teach young readers that history sometimes can repeat itself.

Balto of the Blue Dawn
Magic Tree House Merlin Missions
by Mary Pope Osborn
Jack and Annie’s magic treehouse transports them to Alaska in 1925. They befriend
Balto, a Siberian Husky who needs their help saving people from a diptheria
epidemic. As is the hallmark of the series, this tale is filled with accurate history and
exciting storytelling.

The Ghost of Gracie Mansion
Mysteries in Time Series
by Susan Kohl
Set during the yellow fever epidemic in 1803, the Gracie family retreats from
Manhattan to their new country mansion (which would later serve as the home to New
York’s mayors) seeking safety. While there, the children unravel a mystery and readers
learn about the American Revolution along the way. This book was fact checked for
historical accuracy.

Door in the Wall
by Marguerite De Angeli
This Newberry Medal winner is set in the Middle Ages during the bubonic plague. Robin,
a son of a nobleman, is expected to become a knight. All of that changes when he loses
the use of his legs due to illness. Robin not only learns to overcome adversity but
discovers that trying his best often leads to surprising (and wonderful) results.

Fever 1793
by Laurie Halse Anderson
Set in Philadelphia during the yellow fever epidemic, fourteen-year-old Mattie Cook
experiences a change in perspective as her family tries to survive. Readers gain
knowledge of the American Revolution and the Free African Society as this story
unfolds.

Kelly Bakshi, MS Ed., is a boy mama, freelance writer, and non-fiction children’s book
author. She is also co-chair of the JHC Children’s Education Committee. Connect with
her on instagram @Kellybakshibooks.