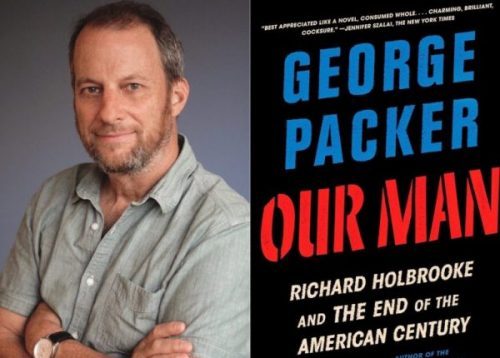 The coronavirus pandemic has reminded us all how interconnected we are. It’s a lesson John Jay understood well. Although Jay is best known as the first chief justice of the United States and author of several of the Federalist Papers, he was also a great diplomat and peacemaker, helping to negotiate the 1783 Treaty of Paris that ended the American Revolution and the 1794 Jay Treaty. To celebrate that legacy–at a time when the world seems smaller than ever–join us on Wednesday, June 17, at 7:30 p.m., for a virtual book talk by celebrated journalist George Packer.

Register here for the virtual event.

As a staff writer for the New Yorker, Packer won the National Book Award for his 2013 narrative history, “The Unwinding: An Inner History of the New America,” which describes the unraveling of our social contract. He’s a wonderfully fluent writer and his new book, “Our Man: Richard Holbrooke and the End of the American Century,” was recently named a finalist for the 2020 Pulitzer Prize.

The Pulitzer Board called Packer’s latest book an “inventive, compulsively readable life of a complicated man of considerable talents and personal failings that offers extraordinary insights into the inner workings of Washington’s foreign policy establishment.”

Packer’s other nonfiction books include The Assassins’ Gate: America in Iraq, a finalist for the 2006 Pulitzer Prize, and Blood of the Liberals, winner of the 2001 Robert F. Kennedy Book Award. He is also the author of two novels and a play, Betrayed, winner of the 2008 Lucille Lortel Award, and the editor of a two-volume edition of the essays of George Orwell.