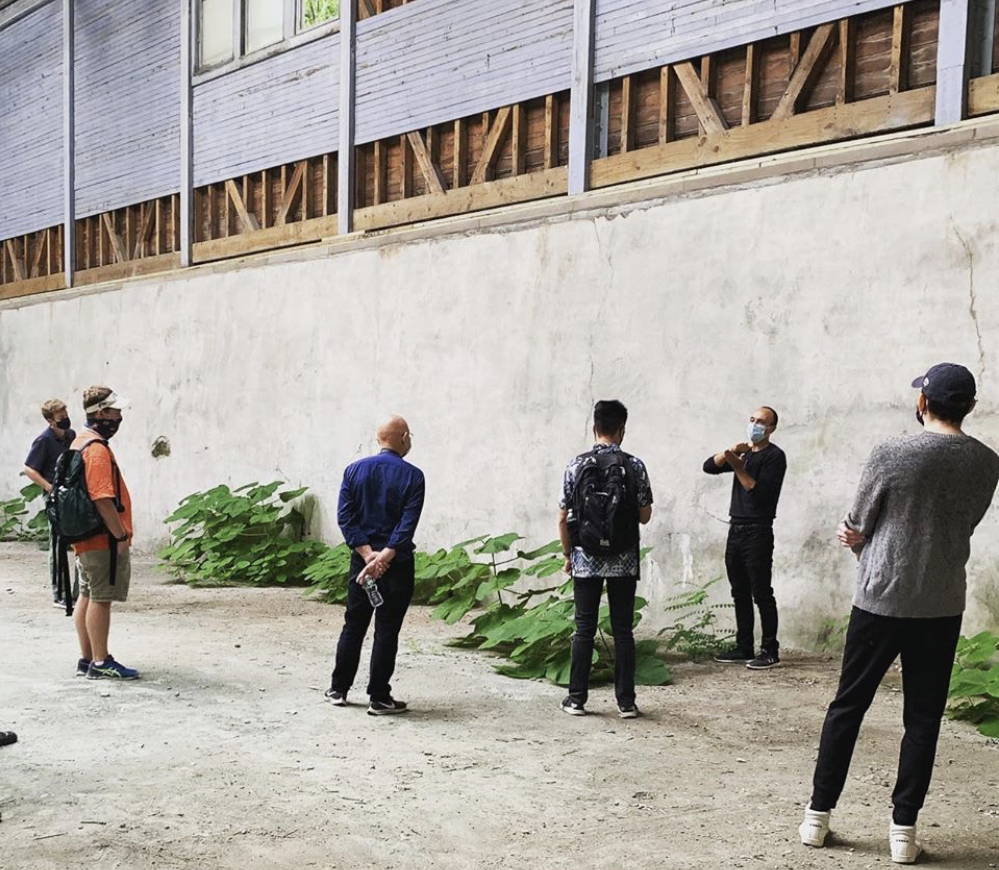 Columbia University’s Graduate School of Architecture, Planning, and Preservation (GSAPP) is offering a studio course this fall semester titled “Radical Re-construction: Materializing Social Justice at the Country Estate of John Jay, a Founder of American Democracy.” The studio is being led by Jorge Otero-Pailos, the school’s head of historic preservation and a member of JHC’s board of trustees, and Mark Rakatansky, an adjunct associate professor at the school and principal of Mark Rakatansky Studio.

Members of the studio made an initial visit to JHC on September 17, when they toured the 1838 Peter Augustus Jay Mansion, the 1907 Van Norden Carriage House, the 1917 Palmer Indoor Tennis House, and the surrounding landscapes. Roughly half the class was able to make the trip in person — wearing masks and social distancing, of course — while the other half joined the studio via Zoom, in some cases from as far away as China.

The aim of the studio, as the syllabus explains, is to “critically question the central preservation practice of reconstruction and explore new radical possibilities for what reconstructions can look and feel like, and the social purposes they can serve.” The studio, it continues, “will move beyond the traditional preservation understanding of reconstruction as the production of a complete in-situ building replica, ‘how it was, where it was,’ following à l’identique historic construction methods. Instead the studio will approach all scales of material interventions, and all construction as forms of re-construction, as ways of reworking pre-existing materialized forms of social and political constructs.”

That goal includes attempting to craft concrete proposals for reconstruction that draw on and build upon JHC’s many years of convening some of the best minds in the world of historic preservation, including James Marston Fitch, Andrew Dolkart, and Gretchen Sorin, author of “Driving While Black,” who during a visit to JHC suggested that the site might serve to “remind Americans of the struggles of the framers of the Constitution and the courts and to connect those struggles with present day concerns about civil rights and civil liberties.”

JHC’s inaugural Jay Fellows, Tom Rice and Rachel Ericksen, laid much of the groundwork for the studio this past summer, when they spent several days each week gathering historical research, digitizing documents, and making 3D scans of several of the structures on the property. Rice even traveled to Newport, Rhode Island, to scan the New York Yacht Club’s original clubhouse, known as Station 10. Designed by Alexander Jackson Davis, the structure may have provided inspiration for a pavilion built atop Cherry Hill at the Jay Estate in the 1840s.

During the first part of the studio, the students will continue Rice and Ericksen’s work to gather and analyze background material about the site. The second part of the studio will focus on developing possible conservation policies for the estate. Ultimately, the course will build on JHC’s long-standing efforts to bring to life the narratives of all the individuals, enslaved and free, who have made the Jay Estate their home over the years.