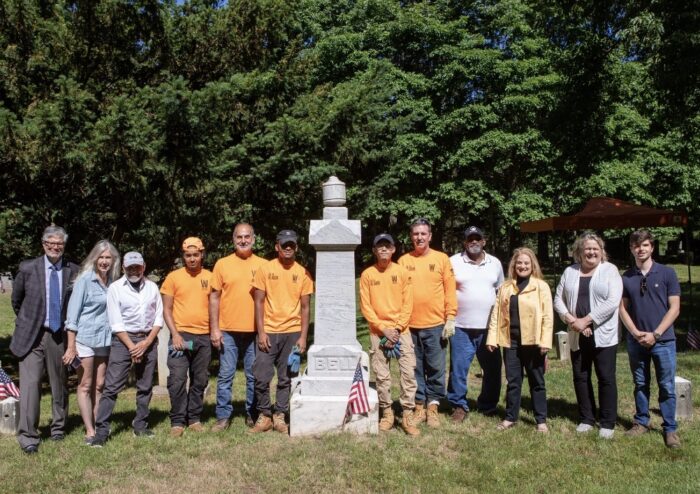 On January 30, 2021, a handful of individuals in Covid masks and winter coats, met at a small one-acre burial ground to plan a substantive and very visible endeavor to celebrate our country’s first federally recognized Juneteenth holiday.  How best to  commemorate the end of slavery in the United States and pay tribute to the people who suffered under oppression for so many years? Dave Thomas, President of the Friends of the African-American Cemetery (FOAAC) in Rye and Suzanne Clary, President of the Jay Heritage Center (JHC) invited Frank Sanchis, Director of US Programs for the World Monuments Fund (WMF) and Susan Olsen, Director of Historical Services for the Woodlawn Cemetery Conservancy (WCC) to tour the grounds of a sacred place first established in 1860 for the departed loved ones of free Black families in the towns of Rye, Mamaroneck, Scarsdale and Port Chester.  The objective: to preserve real stories and stones simultaneously.

Rye’s African-American Cemetery lies just behind Greenwood Union Cemetery off of North Street and was narrowly spared by the construction of I-95. It is a poignant reminder of a chapter in American history when racism existed even in death as African-Americans were prohibited from being buried in white cemeteries. But it is also a testament to the resilience, strength and patriotism of Westchester’s Black community.  The landmarked parcel was first given to members of the St. Frances African Methodist Episcopal Zion Church in Port Chester and also  founders of the Barry Avenue African Methodist Episcopal Zion Church. It is filled with an array of  elegant 19th and 20th century gravestones – some monuments are carved in marble while others are hand-crafted with smooth pebbles and cement. Unfortunately, past storm events like Hurricane Sandy disfigured a good number of the stone memorials – their broken ornaments, long detached, found repose in the grass. Still other granite markers were heaved out of the ground and lay on their sides in the earth. Dave Thomas, founder of the non-profit FOACC has dedicated more than a decade of his life to caring for the cemetery and its stones, enlisting local volunteers and scouts to clean the markers annually but it is a herculean task.

Joined by Debbie Reisner of the Town of Rye, the group started brainstorming about how to further elevate the narratives of the women, men and children interred at the site while also introducing young people to the field of historic preservation, particularly stone conservation with hands-on training. Just as FOACC and JHC have partnered for many years on heritage education in concert with Westchester’s African- American Advisory Board and African-American History in Westchester Commemoration Committee (AAHWCC), WMF and WCC have collaborated together on an endeavor called the Bridge to Craft Careers program since 2015.

Over the next six months, the team conferred, sharing notes and expertise. Dave showed some of the exhaustive research he has compiled over the years to Susan Olsen and the stones were each individually photographed and mapped. WCC also employed drone photography to better document the topography of the cemetery. Fast forward to June and the days just before Juneteenth apprentices from B2CC,  Oliver Moran Sepulveda,  Jonathan Mendoza, and Kenny Tuy supervised by Robert Cappiello, Resident Craftsman and Gerald Dowd, Assistance Craftsman, braved the rain and the heat to restore and clean over 40 stones! Several of the monuments belonged to Civil War veterans like Samuel Bell, Morris Thompson and John Randell. Other stones marked some of the earliest burials in the cemetery like the grave of Susan Byard.

The restoration was unveiled to the public on Saturday, June 19th at 10am in a combined memorial service and Juneteenth ceremony. A large crowd attended and remembered friends lost during the pandemic like Keith Yizar, Bishop Nowotnik, and Doris and John Reavis. Paying their respects were Senator Shelley Mayer, State Assemblyman Steve Otis, County Executive George Latimer, Legislator Catherine Parker, Town of Rye Supervisor Gary Zuckerman and Councilwoman Joan Grangenois-Thomas. Many descendants of the those buried at the cemetery were also present and marveled at the transformation of a once neglected space into a serene and respected sanctuary.

With the success of this template, the nonprofits involved hope to repeat and continue their efforts at other Black cemeteries in New York State and Westchester County.

Read more here about the African-American Cemetery and the B2CC program here.

Read a blog about the Cemetery by Friends Founder Dave Thomas here.