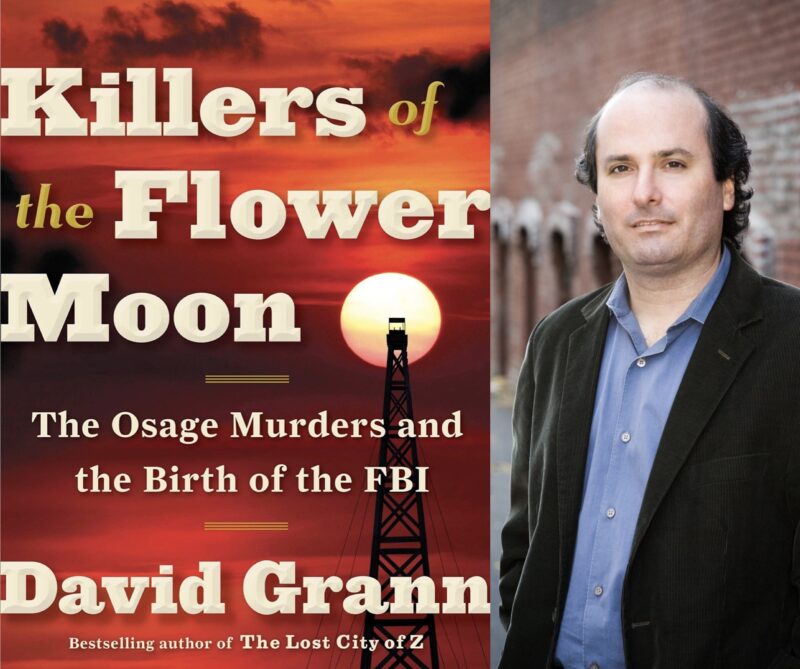 David Grann, the #1 New York Times best-selling author of “Killers of the Flower Moon: The Osage Murders and the Birth of the FBI,” will visit JHC and discuss his book that highlights an investigation into a series of assassinations and complicit coverups that took place in the 1920s in Oklahoma after oil was discovered on Native American lands.
Grann’s work is soon to be a Apple Original film directed by Martin Scorsese and stars Leonardo DiCaprio, Robert De Niro, and John Lithgow. Read more about the movie here.
Grann’s most-recent book, “The White Darkness,” about Antarctic explorer Henry Worsley, was released in 2018.
Limited seating availability, so register soon!
Covid safety restrictions will apply.

David Grann is a #1 New York Times bestselling author and an award-winning staff writer at The New Yorker magazine. His most-recent book, The White Darkness, was published in 2018, is a true story of adventure and obsession in the Antarctic.

Grann’s first book, The Lost City of Z: A Tale of Deadly Obsession in the Amazon, was also #1 New York Times bestseller and has been translated into more than twenty-five languages. Shortlisted for the Samuel Johnson Prize, the book was chosen as one of the best books of 2009 by the New York Times, Washington Post, Entertainment Weekly, Bloomberg, Publishers Weekly, Christian Science Monitor,and other publications. It won the Indies Choice award for the single best nonfiction book of the year. New York Times critic Michiko Katukani described The Lost City of Z as “suspenseful” and “rollicking,” reading “with all the pace and excitement of a movie thriller and all the verisimilitude and detail of firsthand reportage.” The Washington Post called it a “thrill ride from start to finish.” The book was adapted into a critically acclaimed film directed by James Gray and starring Charlie Hunnam, Sienna Miller, Robert Pattinson, and Tom Holland.

Grann’s other book, The Devil and Sherlock Holmes, contains many of his New Yorker stories, and was named by Men’s Journal one of the best true crime books ever written. The stories in the collection focus on everything from the mysterious death of the world’s greatest Sherlock Holmes expert to a Polish writer who might have left clues to a real murder in his postmodern novel. Another piece, “Trial by Fire,” exposed how junk science led to the execution of a likely innocent man in Texas. The story received a George Polk award for outstanding journalism and a Silver Gavel award for fostering the public’s understanding of the justice system, and the piece was cited by the U.S. Supreme Court Justice Stephen Breyer in his opinion on the constitutionality of the death penalty. Grann–whom Vox called  a “longform-journalism legend,” and whose work Slate said “inspires a devotion in readers that can border on the obsessive”–has twice received the Sigma Delta Chi Award for excellence in journalism.

Several of his stories have served as source material for feature films. “Old Man and the Gun” in The Devil and Sherlock Holmes, which is about an aging stick-up man and prison escape artist, will be released in 2018 by Fox Searchlight Pictures. The film is directed by David Lowery and stars Robert Redford, Casey Affleck, Sissy Spacek, Danny Glover, and Tom Waits. A movie based on “Trial by Fire” is also being released this year. It’s directed by Ed Zwick and stars Jack O’Connell and Laura Dern. And another story, “The Yankee Comandante,” is being developed into a film by George Clooney.

Before joining The New Yorker in 2003, Grann was a senior editor at The New Republic, and, from 1995 until 1996, the executive editor of the newspaper The Hill. He holds master’s degrees in international relations from the Fletcher School of Law & Diplomacy as well as in creative writing from Boston University. After graduating from Connecticut College in 1989, he received a Thomas Watson Fellowship and did research in Mexico, where he began his career in journalism. He currently lives in New York with his wife and two children.