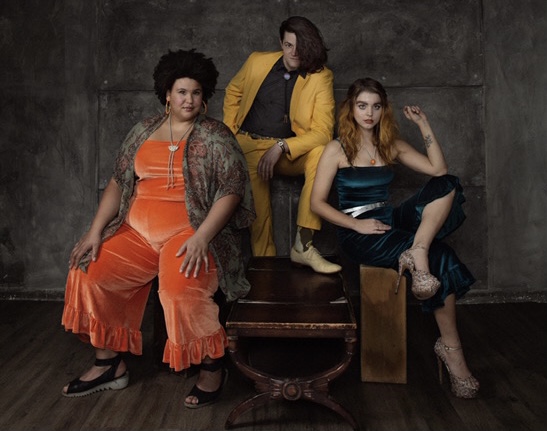 Join us for an outdoor concert and picnic on Sunday, September 19th at 4pm at the Jay Estate with Bandits on the Run, featuring Regina Strayhorn, Sydney Shepherd, and Adrian Blake Enscoe, co-star of the hit Apple TV+ historical comedy “Dickinson”!
Bandits on the Run is an indie-folk-pop-americana outfit consisting of three lead singers, a guitar, a cello, a suitcase drum, an accordion, and various toy instruments. They hail from Brooklyn, NY and are known for their vivacious performance style, genre-defying sound, soaring harmonies, and ability to make music-magic happen everywhere from subway platforms to concert halls. The band will play their new song “Hurricane,” their tribute to “Maya Angelou,” and more.
Bring lawn chairs or a blanket and purchase bites from Melt Mobile, Milton Point Provisions, and Jimmy’s Soft Serve ice cream!
Limited availability so register soon! Covid safety restrictions will apply.

ABOUT BANDITS ON THE RUN (OFFICIAL BIO):

The origin story of Bandits on the Run reads like a New York tall tale — a young cellist catching the late train home happens upon a busker singing and playing on the subway platform, the two strike up a conversation about music that becomes an all-night Brooklyn adventure. The meeting forms a bond that quickly leads to musical collaboration, then the cellist’s poet friend finds herself in New York and moves into an open room in the cellist’s apartment. The three strike up an instant creative alchemy, they put on some bandanas, take to the subways, and the rest is history.

Six years later, Bandits on the Run has evolved into a staple of the New York music scene, both above and below ground. In those six years the Bandits have come of age together, their music evolving and expanding into a truly unique and revolutionary sound. The guitarist, Adrian Blake Enscoe, now employs his feet as their percussion section, using a suitcase drum and foot tambourine. The cellist, Sydney Shepherd, now writes full-on string arrangements that summon the spirit of George Martin. The poet, Regina Strayhorn, is now an accordionist, melodica player, glockenspieler, and plays a mean shaky banana.

When performing as the Bandits, the trio all adopt alter-egos: Roy Dodger, Bonanza Jellyfish, and Clarissa. Why the wacky names? “We chose to use aliases because what self-respecting Bandit doesn’t have a Bandit name?” says Adrian Blake Enscoe/Roy Dodger. “Our names are all inspired by figures in literature or pop culture that inspire us, and our bandit ‘characters’ are basically us with some slight exaggerations and magical twists,”  says Sydney Shepherd/Bonanza Jellyfish. “The names also give us a certain freedom and allow us to not take ourselves so seriously while performing,” adds Regina Strayhorn/Clarissa.

The year 2020 had Bandits on the Run poised to make their biggest moves yet; they appeared at the ASCAP Cafe Stage at Sundance, sharing a bill with the likes of Aaron Lee Tasjan, Rain Phoenix, and Matt Berninger of The National. They’d been selected for SXSW 2020 and built a tour that included an appearance at The Kennedy Center and an opening slot for Larkin Poe at NYC’s famed Webster Hall, before the pandemic struck down the best-laid plans of every mouse and man ‘round the globe.

But the SXSW cancellation proved fortuitous to Bandits on the Run — in all the promotion leading up to what would have been the festival, the Bandits had already caught the eye of producer Ryan Hadlock (The Lumineers, Vance Joy, Brandi Carlile, Johnny Flynn, and countless others) and in the immediate aftermath of the cancelation, he contacted them about the prospect of working together.

As tumult reigned and the list of canceled plans grew, things quickly fell into place for Bandits on the Run to head west that summer, safely road-tripping from the East Coast to Bear Creek Studios in Seattle in their trusty van Rip Van Winkle. In the words of Adrian: “The spirit of 2020 was beckoning! It was a bold pivot away from what we were looking forward to doing and towards something we didn’t even know we craved: traveling across the country by moonlight, singing to rocks and cactuses along the way, and at the end of it recording at a world-renowned studio with a world-renowned producer. What could be more Bandits than that?”

The resulting EP, fittingly titled “Now is the Time,” is hands-down Bandits on the Run’s most daring, lush, and sophisticated work yet. Seamlessly shifting from shades of The Beatles to Fleetwood Mac to David Byrne to Laurel Canyon, the Bandits’ musical influences are apparent in the EP while still carving out a distinctive voice all their own. Everyone in the trio writes their own songs and takes turns singing lead, which means on this six song EP each member gets two songs to step into the spotlight and showcase their melodic, lyrical, and vocal prowess. Very rarely does a band feature three voices equally matched in skill and power, each sounding so completely different from the others and yet still masterfully blending so well together. “That’s the alchemy that’s been there since Day 1,” says Regina. “You can practice all you want (and we do) but if that spark of magic isn’t there it’ll never sound quite right. We are so lucky we found that spark in each other.”

“Having Bandits on the Run out to Bear Creek Studio was a really wonderful experience,” producer Ryan Hadlock says. “Their songwriting and interwoven vocal harmonies are beautiful and inspiring. Working with the Bandits on these songs during the pandemic this summer was definitely a bright spot in an otherwise difficult and dark year.”

Their first single from that EP, the titular “Now is the Time,” caught the ear of Rolling Stone and was included in their weekly round-up of best new folk music during the week of the November presidential election. Rolling Stone wrote: “Bandits on the Run capture the urgency of the moment with “Now is the Time,” a harmony-rich new song aimed at inspiring people to action, whether voting or simply doing something magical. ‘Try to find a reason or steep in the season of now / And be the what not the how,’ they sing. With cello providing a low-end counter melody, “Now Is the Time” has a chamber-music quality that adds to the rousing atmosphere.”

Bandits on the Run hope their music will continue to inspire change and activism, and will ultimately lead people to greater connection with others as well as themselves. Though some tracks on the forthcoming EP take on a darker tone than their past work, the underlying thread of optimism and hope never wavers. In “We Battle Giants,”  another single from the EP, Bandits on the Run champion the spirit of their friendship and overcoming seemingly insurmountable obstacles together. Kevin Cole of KEXP said of the track: “I fell in love… This song is how I want to wake up every single morning, I want to feel this way: uplifted, so enthusiastic, inspiring, empowering; it’s like a battle cry. Man, it’s better than a triple shot of espresso.”

Fans familiar with Bandits on the Run’s live show will be thrilled to finally have recorded versions of the delightfully witchy “Spellbound,”  the heartfelt “Sing You To Sleep,” and the anthemic “She’s The Queen”. A brand new never-before-heard track, “Hurricane,” rounds out the roster. “It goes in a moodier direction than our other tunes,” says Sydney. “I wrote the song out of a great deal of frustration and angst. It’s about feeling a deep, almost primal longing to hold fast to something dear in the midst of chaos. I think that’s a feeling we can all relate to after a year like this. But when folks think ‘Bandits on the Run’, I don’t imagine that the words ‘angst’ and ‘primal’ are the first to come to mind–so in that way it’s certainly the dark horse of the EP.”

In addition to Now Is The Time, 2020 saw Bandits on the Run write and perform in their first musical, “The Band at the End of the World,” a post-apocalyptic sci-fi thriller produced by off-Broadway’s Prospect Theatre Company in a visionary move to create short musical films in lieu of live performance. The musical showcases three brand new songs from the Bandits on the Run and is a promising sign of their ability to cross over into many different performance mediums. It should come as no surprise, the three are all trained actors and are known as forces of nature in their live concerts. Once live music is safe again, there can be no doubt that they’ll be back at their singular brand of performance, which frequently incorporates shadow puppet shows, flash mob choirs, party favors, and costume-clad guest stars.

Dig further into the history of Bandits on the Run and take a peek at their proverbial trophy wall, and you’ll find an impressive array: two NPR Tiny Desk Contest Top Shelf placements for their songs “Love in the Underground” and “We Battle Giants,”  two placements on Spotify playlists (Folk Pop and The New Retro) from their first album The Criminal Record, the first place prize in the New York Coffee Festival Songwriting Contest, two tours through Europe, an EP Bandits Live at the Power Station recorded entirely live at one of NYC’s most iconic recording studios, two songs landing on WFUV’s Current Favorite Songs list, music placement in the feature film Ben Is Back and scoring for the upcoming film The Same Storm, the Deli-premiered release of their double-feature music video for “Love In The Underground,” Paste Live Session, features in NPR Music, Billboard, Earmilk, and Pancakes and Whiskey. All of this without the help of a label — cementing Bandits on the Run’s status as a DIY force to be reckoned with.

As always with this fruitful group of young ruffians, there’s lots more “there” there. If you keep digging you’ll unearth a set of burgeoning artistic careers outside of Banditry: Adrian Blake Enscoe stars in Apple TV+’s Peabody Award-winning show Dickinson as the dashing and endearing Austin Dickinson, brother of poet Emily Dickinson (Season 2 just premiered to great critical acclaim, the New York Times heralding it “Apple TV+’s first great series;” and Production has just completed for season 3). Sydney Shepherd is a Broadway veteran and recently starred as Lyla Novacek in the world premiere of the musical August Rush. Regina Strayhorn has acted in off-Broadway shows from Queens’ recently closed Secret Theater to Lincoln Center and is dipping her toes into the world of casting with the Broadway for Racial Justice Casting Directive. All of this begs the question: Where do these Bandits find the time and energy to take on these other pursuits while prolifically writing music as a band? Are they superhuman? Time-travellers? That’s an investigation for another day.

At any rate, the more you dig, the more you realize that the well of magic Bandits on the Run are capable of bringing into the world is bottomless. And looking forward into the horizon of 2021 — with the recent release of Now Is The Time and the rejuvenation of live performance, they just may be the band best equipped to bring us into the new decade with spirit, love, joy, a little mystery and mischief, and a big heaping spoonful of heart.