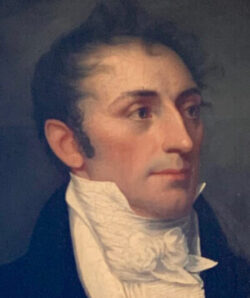 The Jay Heritage Center is excited to announce the donation of an extraordinary painting of Peter Augustus Jay, the eldest son of jurist and peacemaker John Jay. Executed by leading 19th century American portraitist John Wesley Jarvis, the artwork was given by the children of Jay “Peter” Pierrepont Moffat, Jr., in honor of their father and their mother Pamela Dawson Moffat. The painting was passed down through the Jay family over the generations and its return to the Jay Mansion is truly a landmark event.

The portrait will be displayed in the Greek Revival Jay Mansion in Rye which was commissioned by Peter Augustus Jay in 1836. Today the Jay Mansion and surrounding Jay Estate is a compelling venue and educational center where the public can explore our country’s history and participate in dynamic dialogues with leading academics and authors about global issues including social justice, environmental stewardship, cultural inclusivity and much more.

Like his great-great-great-great grandfather, John Jay who directed counterespionage efforts during the Revolutionary War and navigated treaties and foreign affair matters for our young nation, Peter Moffat had a distinguished career in intelligence research and diplomacy. Born in New York to Ambassador Jay Pierrepont Moffat and Lilla Cabot Grew Moffat in 1937, Moffat served in the Army and the National Security Administration before joining the Foreign Service as an intelligence research officer. Postings in Kobe, Paris, Bern, and Washington were followed by terms as Deputy Chief of Mission in Port of Spain, Trinidad and Tobago, and in Rabat, Morocco. In 1983, he was appointed Ambassador to Chad and served in that role until July 1985, during the Chadian-Libyan Conflict. Afterward he was briefly the senior vice president of the National War College. Peter’s wife was Pamela Mary Dawson, daughter of Shakespeare scholar Giles Dawson and Margaret Williams. Pamela was a curator with the National Women’s Museum of Art for many years, co-authoring a book about American Impressionist Lila Cabot Perry.

Peter made several meaningful donations of historic Jay family books and letters to JHC during his lifetime, so it is especially humbling to now receive this painting from Pam and Peter’s children, Sarah, Matthew, and Nathaniel as they continue the family’s support and encouragement of our mission. The subject of the painting, Peter Augustus Jay, was a noted New York lawyer, a trustee of numerous philanthropic and educational institutions and an anti-slavery advocate. He is known for giving an impassioned speech in 1821 at the New York State Constitutional Convention; as a delegate, Jay argued that the right to vote should be extended to free African-American men but his plea for Black suffrage was overruled. Read more about the convention and PAJ’s remarks here.

Why, sir, are these men to be excluded from rights which they possess in common with their countrymen? … Why are they, who were born as free as ourselves, natives of the same country…now to be deprived of all those rights, and doomed to remain forever as aliens among us?

The artist John Wesley Jarvis captured the likenesses of many notable Americans including novelist James Fenimore Cooper, patriot Thomas Paine and War of 1812 naval hero Oliver Hazard Perry. Jarvis is also known for his poignant portrayal of father and son Native American Sauk warriors Black Hawk and Whirling Thunder who were imprisoned after organizing deadly battles resisting the US government for seizing their tribal lands in 1832. Jarvis’s paintings can be found in the collections of the Metropolitan Museum of Art, the National Portrait Gallery and more.