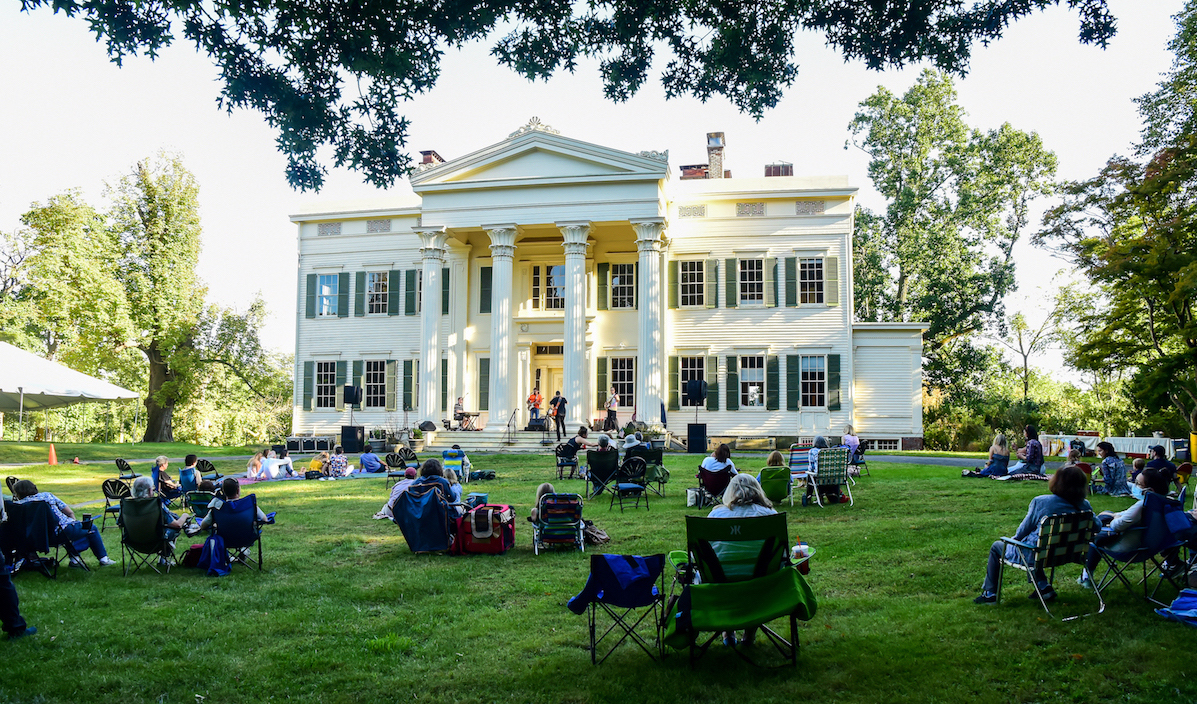 The Brooklyn-based trio of Regina Strayhorn, Sydney Shepherd, and Adrian Blake Enscoe–otherwise known as the indie-folk-pop group Bandits on the Run–held an audience of over 150 people spellbound at the first Jams at Jay event since the start of the pandemic. The concert was part of NY State Parks’s annual Hudson River Valley Ramble calendar.

The weather turned out to be spectacular, and so was the music: The Bandits kicked off their set with a charming rendition of their hit “Love in the Underground,” and concluded it with a rousing cover of Beyoncé’s “Love on Top.” Other highlights of the show included a stirring mash-up of the Fleetwood Mac songs “Rhiannon” and “The Chain,” and an acoustic encore beside the refreshment tables.

The band interspersed their performance with asides about their songwriting inspirations–from poetry to social justice. Strayhorn, who is a poet and plays the accordion, told the crowd how much she appreciated the Jay Estate’s focus on social justice programming and efforts to tell the stories of all the estate’s inhabitants. Enscoe, too, has a connection to both poetry and social justice. Aside from touring with the Bandits, Enscoe plays Austin Dickinson, the brother of the poet Emily Dickinson, on the Apple TV+ show “Dickinson,” the first two seasons of which highlighted the historical tensions involved in past efforts to realize the American promise.

The family friendly afternoon began with a set by The Brian Carter Project, a newly formed group headed by veteran New Rochelle-based musician Brian Carter, who is also the director of the New Rochelle jazz festival. Carter’s group played crowd favorites like the Beatles‘s “Eleanor Rigby,” covers by Steely Dan, and two popular songs by the Red Hot Chili Peppers.

Guests socially distanced in lawn chairs and on blankets on the grass in front of the 1838 Peter Augustus Jay Mansion, enjoying pizza from Piazza Pizzeria and ice cream from Jimmy’s Soft Serve.

The concert almost didn’t happen. Just hours before it was scheduled to begin, a sedan on the Boston Post Road collided with a utility pole just outside the property, toppling power lines and knocking out power to a stretch of the Historic District. Without amplification, the Bandits offered to play an acoustic set–after all, they started busking in the subways, they pointed out–but, fortunately, thanks to heroic efforts from the Con Edison team on site, the power was restored just before the sound check–and the show went on as planned.